Dead heat rules are something that can catch out people who are new to betting, whether online or not, and whilst they may appear unfair if you get stung by them and weren’t expecting it, once you understand the rule it should all make sense. That is, it should, if I do my job properly and explain it… 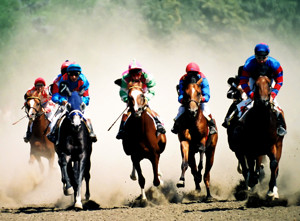 Many bets can be subject to dead heat rules but we’ll start with a very simple example and the one where the rule was probably first applied. In a horse race, in the unlikely event of a dead heat – that is to say the horses cannot be separated even by a photo finish – dead heat rules will apply.

In events that offer a tie, draw or similar there can be no dead heat but otherwise the rules stated above will apply and could explain why the returns on your bet are less than you were expecting.

Dead Heats in Other Sports

Whilst a dead heat is common in horse racing, it can happen in pretty much any event where there is the possibility of a joint winner. Even sports such as football can have dead heats on certain markets such as top goalscorer, however the way different bookmakers settle these bets actually varies.

For example, at Euro 2012 Fernando Torres was one of six players to score three goals in the tournament. Some bets on the top scorer would have settled a six way dead heat, meaning only a very small payout. In fact, a £60 bet at 10/1 would have returned just £110, which would have been exceptionally upsetting had you been expecting to receive the full £660!

However, some bookmakers settled this as a straight win for Torres, based on his official Golden Boot title by virtue of having created the joint most assists and played the least minutes. Great if you had Torres and were paid out at the full odds, but not so good for those that backed Mario Gomez and the other four players who bagged three goals who received nothing.

For this reason it is important to always check the terms at whichever bookmaker you use so you are at least aware of what might happen to your bet.

The other thing to be aware of is how dead heat rules apply to each way bets. This probably applies most regularly to golf, although it will also apply to other events such as top scorer bets in football. If you place an each way (let’s say top four) bet on the golf and your player finishes in a tie for third with four other players – not uncommon in golf where there are very large fields – then dead heat rules will apply.

In the example given the payout depends on the number of places remaining – so in this instance your player finished third and each way paid third and fourth, hence two places; and how many people involved in the dead heat – in this case four.

The first number is divided by the second to calculate what percentage of your stake won, so in this example it is 2/4 or 1/2. As such half your bet is settled as a winner and half as a loser (subject to the standard each way terms too of course).