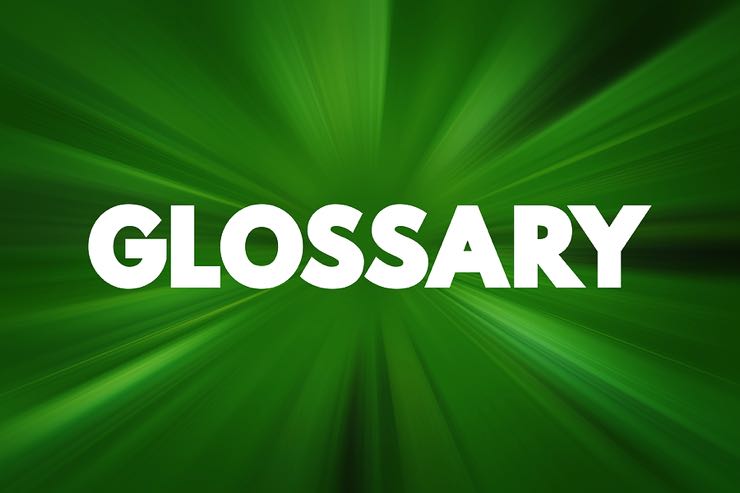 If you don’t know your Asian handicaps from your arbitrage, your exchanges from your exposure or your Yankees from your Goliaths, read on. Our betting glossary gives you a guide to the main terms and jargon that you’ll come across whilst betting on sports – meaning you won’t be flummoxed by semantic shenanigans when all you want to do is place your bets.

Accumulator – An accumulator – or acca, as it is known – is a bet that relies on multiple outcomes being successful for it to win. The odds of each “leg” of the acca are multiplied often giving a big return, though clearly with a reduced probability of success.

Ante-Post – Ante-post bets have their origins in horse racing (it means “before the post”), and is bet placed before the final details of an event are confirmed. Examples of ante-post bets include backing a horse for a big race weeks in advance or backing a team to the win the World Cup before the qualification phase has been completed.

Arbitrage – Arbitrage is the process of taking advantage of the situation that arises when odds between two or more betting markets mean there is an opportunity to back all outcomes and lock in a guaranteed profit. Referred to as an “arb”, people betting on such events are able to win money whatever the outcome of the event, as long as they do their sums correctly!

Asian Handicap – Asian handicaps are a type of bet that gained popularity in (surprise, surprise) Asia and spread further afield during the internet age. Used mainly in football (soccer), teams are given handicaps – and corresponding odds – according to their form, and it is designed to eliminate the draw option in match betting. The handicap given can be either positive or negative and range from ¼ (0.25) of a goal upwards (though rarely would it go above +3.5). The handicaps can also be split, for instance +1.5, +2 (also written as +1.75) whereby if the team backed loses by two goals, half the stake, bet on +2, becomes a “push” (is refunded) and the other half, bet on +1.5, is lost.

Banker – A banker is a selection that is – at least on the face of it – very likely to come in (for example Manchester United to beat Grimsby Town, were they to meet). Bankers can be used to edge up the odds in an accumulator while not reducing the overall probability of success by too much.

Bet – Okay, if you don’t know what a bet is you really shouldn’t place one! But for the sake of being thorough, a bet (or wager) involves the placing of money on an unknown outcome of some future event such that if that event occurs, some return is forthcoming. Typically an agreement between two parties (often the bookmaker and the punter), the bet is generally placed at pre-determined odds such that the bettor is aware of the reward they will receive should the particular outcome (for example a chosen horse winning a named race) come to pass.

Betting Exchange – A betting exchange, as opposed to a conventional bookmaker, allows customers the chance to “trade” rather than just place bets. In this way they are able to both back and lay particular outcomes and they can choose the odds they wish for each, posting them in the market place for others to consider accepting. Similar to stock markets, bettors are betting against one another – rather than the bookie – while paying a commission for the privilege to the company running the exchange (e.g. Betfair or Betdaq).

Betting Tax – Betting tax is the duty levied by governments either on the profits of bookmakers or the profits or stakes of bettors. Rates and rules vary between jurisdictions.

Bookmaker – A bookmaker is an individual or organisation who takes bets, calculates and offers odds on specified betting markets and pays out relevant winnings.

Dead Heat – A dead heat occurs when two (or more) competitors in a particular event finish in exactly the same time or with exactly the same score. While the term is usually used to refer to two runners in horse racing who can’t be split on the line, dead heats can exist in other sports (for instance when each way golf bets pay for top-five finishes and four players finish in joint fifth position). Bookmakers have specific dead heat rules, invariably which reduce the odds at which they pay out on each selection.

Dividend – The dividend (also known as total or tote returns) is the amount paid out on totepool bets. It is calculated by dividing the total stakes in a particular pool by the number of winning bets.

Double – The simplest form of multiple bet (or accumulator), a double is a bet consisting of two selections which must both come in for the bet to pay out.

Drift – When odds drift they have lengthened (become larger), often as a result of some pertinent information.

Each Way – An each way bet is actually two bets of the same stake, one on your selection to win, and one on it to place. The proportion of the odds paid out for the place half of the bet varies between events, usually between half and a fifth.

Exposure – The exposure is the amount you are liable to lose if your bet is unsuccessful. While this is a set amount in fixed odds betting, if wagering on spread betting markets, the exposure can be theoretically unlimited in some markets. The exposure also refers to your possible loss at a betting exchange when you are laying an outcome.

Favourite – The favourite in a particular betting market is simply the selection with the shortest odds and therefore one deemed most likely to win. If two or more selections have equally short odds they are dubbed the joint favourites.

First Goalscorer – A first goalscorer bet (most popular in football) is simply a wager on which player will score the first goal of the match. If the first goal is an own goal, then most bookies will base the outcome of this bet on the next goal. If the only goals in a match are own goals or if no goals are scored, the no goalscorer outcome is the one on which they pay out. First tryscorer bets are similar in rugby.

Forecast – A forecast is a bet in which you select the first and second finishers in a particular event either in the correct order (straight forecast) or in either order (reverse forecast).

Full Cover – A term used to describe covering all the possible doubles, trebles and accumulator bets in a multiple bet of whatever size.

Futures – Used in the US, means the same as ante post, that is offering odds on events that are yet to commence or for which not all information is currently available.

Goliath – A Goliath is a multiple bet containing eight selections that consists of 247 bets that incorporates 28 double, 56 trebles, 70 four-folds, 56 five-folds, 28 six-folds, eight seven-folds and one eight-fold.

Handicap – A handicap is a method used by bookies to even out the odds (such as by giving one team in football a two goal advantage and pricing both teams at similar odds). Using fractional handicaps in sports such as football also eradicates the draw as a possible outcome. Also refers to the mechanism used in horse racing to give all runners as close to an equal chance of winning as possible.

Hedge – When you hedge your bet(s) you are effectively backing against your original selection in order to minimise losses or lock in a profit.

Heinz – A multiple bet of six selections which consists of 57 bets that incorporates 15 doubles, 20 trebles, 15 four-folds, six five-folds and one six-fold.

Last Goalscorer – A similar bet to first goalscorer in football (and other sports) except here you are selecting the player who will score the last goal of the match.

Lucky 15 – A Lucky 15 is a multiple bet with four selections that covers all possible bets, that is four singles, six doubles, four trebles and one four-fold accumulator. This type of bet is called a full cover with singles. Betfred invented the Lucky 15…well done Fred!

Martingale System – A betting system based on doubling-up your bets in order to ‘guarantee’ an eventual profit. Often touted as a foolproof way to ‘beat the bookies’ and in particular the roulette wheel, it is more often than not a sure fire way to blow your bankroll.

Multiples – Multiples are a series of separate bets on two or more selections that must all come in for the overall bet to be successful.

Nap – A Nap is a tipsters number one tip, one which they recommend above all others that day / week / year.

Odds Against – Odds against simply refers to selections which are priced at odds greater than evens (1/1, 2.00).

Odds On – Odds on refers to selections in a given market which are priced at odds shorter than evens (1/1, 2.00).

Outsider – An outsider is a selection which is not expected (by the bookies) to be successful, hence their odds are longer than the favoured selections.

Parimutuel – A form of betting on horse races, for instance, in which all bets are placed into a pool and the subsequent payouts are based on how many people win, each getting a share of said pool (after the bookies’ vigorish has been removed).

Parlay – A US term for an accumulator bet.

Place – The term used to described a finishing position (i.e. not the winner) that will be paid out in place bets and the place half of each way bets.

Rule 4 Deductions – Rule 4 deductions are the mechanism by which bookies reduce the odds of winning selections if the number of runners / outcomes was reduced, for instance if there were non-runners in a horse race. Doesn’t apply to ante-post or starting price bets.

Singles – The simplest form of bet, singles are straight up bets ‘on the nose’, that is for a particular selection to win, with no reliance on other outcomes to be successful in order to receive a payout.

Spread Betting – As opposed to fixed odds betting, the amount you could win or lose on a particular outcome with spread betting is not predetermined and depends on the accuracy of your prediction, as opposed to the simple win/lose nature of traditional betting. You buy or sell at a given value in the particular market, whereby the bookie offers a spread between the buying and selling prices so as to lock in their profit whatever the outcome. Spread betting can lead to massive profits or losses depending on the specific market details.

Super Heinz – A multiple bet similar to a Heinz but with seven selections and 120 bets: 21 doubles, 35 trebles, 35 four-folds, 21 five-folds, seven six-folds and one seven-way accumulator.

Super Yankee – Another multiple bet, a Super Yankee (also known as a Canadian), this one consisting of 26 bets from five selections: 10 double, 10 trebles, five four-folds and one five-fold.

Tic-Tac – Tic-Tac is the sign language used by trackside bookmakers at horseracing meetings to communicate the odds and market movers. Seen less and less since the advent of mobile phones and computers.

Trixie – A multiple bet of three selections and consisting of four bets: three doubles and a treble.

Underdog – The team or player who is deemed less likely to win and hence is priced at longer odds and receives points/goals advantage in the handicap markets.

Vigorish – Known also as the ‘vig’ or the ‘take’, the vigorish is the amount taken by the bookmaker in profit from the total stakes on a given market.