The vig, short for vigorish, is effectively the bookmakers’ profit margin and is how they (hope to) make money. You thought it was by knowing which horse or football team will win? Think again! With a balanced book and odds on their sides, the bookie will make a profit regardless of who wins.

There are a number of other terms used for the vig and it is often also called the juice, the cut or the take, whilst you may also hear it referred to as the overround, although this latter term, whilst very similar, is technically slightly different. Either way, what we’re talking about in this article is how bookmakers and betting sites insert a profit margin in to their bets by paying out slightly less than the chance of the bet winning.

Betting Margins on a Coin Toss

One betting market that we would always advise to steer clear of is very useful for demonstrating the theory behind the bookies’ “commission” and that is the market for who will win the coin toss in cricket or other sports.

Regardless of the previous success of a captain in guessing whether it will land on heads or tails, this market is a pure 50/50 chance, with neither side/captain more or less likely to win than the other.

The odds should, therefore, be even money (2.00 in decimal) on either side; however, in order to make a profit, the bookmaker cannot offer even money and instead offers odds of 1.9 or sometimes even lower. Thus, if they are able to take exactly the same amount of money on both sides of the bet they can ensure a profit either way and technically, in the long term, the punter cannot win.

In the charts below we show the long term payouts from a series of coin tosses, assuming an equal number of wagers on heads and tails and a perfect 50-50 outcome. In reality both occurances are unlikely to happen perfectly, but it helps illustrate the principle better.

Right Chart – The example on the right takes into account the bookmakers margin, and so instead of paying out even money a winning bet pays out 1.9. Here from the same 1,000 flips with an equal number of £10 wagers on both heads and tales, there woud be £20,000 bet in total but £19,000 returned in winnings meaning the bookies pocket £1,000 (5%):

Note: We’re using decimal odds for these examples purely because it makes the calculations easier to follow. You would find the exact same results if using fractional or american odds. 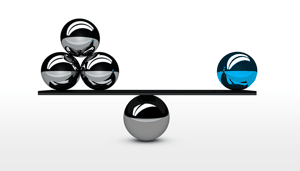 What’s important about the above example is that there is an equal value of wagers for both heads and tails, and it is this that ensures that the bookmakers churn a profit in the long run. This is a rather simplistic view of the concept as it actually isn’t the amount of money bet on a market that’s important, it’s the liability (the amount that they will have to pay out if the bet wins) that the bookie is exposed to.

Using a more common market, when backing over or under 2.5 goals in football, assuming each outcome is ranked by the bookmaker as equally likely to happen, both under and over 2.5 goals will be priced at 10/11 (with a good bookmaker) or 5/6 or even as low as 4/5 with some greedy bookies out there!

If the bookmaker begins to get a lot of bets on one side of the bet, for example overs, they have a choice to make. They can either decide they are confident in their odds and there really is an equal chance of the event happening and they are happy to accept that money and take a risk on losing should the game be high-scoring. Or they can decide to change their odds in order to make overs less enticing to punters and unders more attractive. If they change the odds from 10/11 on both to evens on unders and 4/5 on overs they should find that more people begin to bet on under 2.5 goals.

By doing this the bookmaker hopes to end with a balanced book, such that whichever outcome happens he will make a broadly similar profit with no risk of losing money.

Case in Point: The EU Referrendum

A good example of this is the EU Referrendum. During the Brexit vote the odds for the UK to remain in the EU were heavy favourites at 1/7 whilst the leave vote was the underdog at 5/2 (or even higher on the night). The reason for this was purely because so much money was being placed on the remain market that they had to keep cutting the odds to lessen the appeal of the bet.

Conversely the odds for a leave vote lengthened to encourage bets, despite the fact that the odds no longer even vaguely represented what was being reported by the polls which pointed to the vote being a very close affair. The sole reason for the odds were to balance the book and try and make sure that no matter which way the vote went, they would make a profit.

Whilst in principle a balanced book is the bookies ideal scenario, and can even be achieved by trading off bets with other bookmakers, it is rare a book to ever be perfectly balanced. Small variations are part and parcel of the business and, whilst they can cause short term volatility, tend to play out in the long run.

However, there are occasions where a bookmaker decides not to balance their book and instead “take a position” – effectively betting against the outcome. After all, the 1000/1 long shot with three legs in the 2:15 from Newmarket is highly unlikely to ever be a serious contender for winning the race.

This can obviously back fire and end up costing the bookie money, but they’re taking a chance and betting that their team of analysts, experience and the wealth of data they have at their fingertips can, more often than not, predict what wont happen.