PayPal are now widely regarded as one of the most recognised e-commerce payment solution companies in the world. They basically allow you to fund what is known as an e-wallet before then paying for goods and services from a huge number of resources from around the planet.

The company actually took a while before allowing gambling organisations to use their payment service for their online gambling sites. One of the reasons behind this was simply that gambling banking laws worked in a much stricter environment than that of your everyday online store and it would appear to cause PayPal more problems than solutions. Over the years, however, PayPal have grown to such a level that not offering this service to these types of companies was beginning to be a burden, especially with a lot of their e-wallet competitors now working closely within the gambling sector.

One of the main reasons as to why PayPal have become so popular is largely down to how efficient they have become in regards of payment processing. You can now instantly deposit money into your account and have it available to use as you please. On top of that, they now offer instant bank withdrawals from your PayPal account making it one of the fastest processes in the industry.

Many who have been involved with the gambling industry for some time will know that it can often take a number of days or even weeks, for your money to hit your bank account, but the processing system used by PayPal means it can be completed within a matter of hours.

On top of that, the availability of the site is something that we also found to be particularly useful. We don’t just mean in terms of gambling sites providing these products, but also in terms of mobile interaction, online invoicing, payment protection, payment processing and information forms to allow you to not only view your payments, but also sort them.

The downsides are pretty few and far between, and for most, they wont even be a consideration. But, PayPal has always been pretty trigger happy when it comes to closing or freezing payment accounts. They take online fraud VERY seriously, so the first scent of foul play and the account will be locked. That being said, this isn’t always a bad thing and they do have this sort of structure in place for a reason, but it can become frustrating if you are looking to make speedy transactions!

How to Deposit Using PayPal 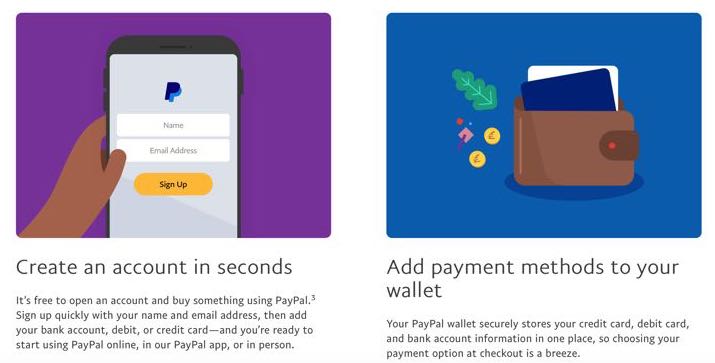 PayPal is actually one of the easiest ways in which you process a payment option. We’ve come up with a short step-by-step guide, but please note that whilst it will be relatively accurate for most, it might not be exactly how the process pans out, which will depend on the bookmaker or casino.

The first thing is making sure that the bookmaker accepts PayPal from their cashier. Once you have found it, simply click on the PayPal tab where you will be taken to enter your details for your betting account.

Once your account is set up and you have selected to deposit with PayPal, the PayPal website will load up (likely in a new tab) where you will be asked to enter your username and password for your PayPal account (note: this is not the same as logging into your betting account).

After logging in and confirming the amount you want to deposit, the PayPal tab will close and you will be re-directed back to your gambling outlet. Should you not be re-directed, then enter the betting sites address manually, log back in and check your finds are in your account.

What Countries Can Use PayPal for Online Gambling?

PayPal currently open their doors to over 200 countries from around the world. That being said, the actual number of countries that accept PayPal for gambling purposes is much lower than that. The majority of countries that are accepted are from Europe and the biggest notable absence comes in the form the US.

Their current laws make any sort of deposits, not just from PayPal, extremely difficult, if not illegal for most. Below we have listed the countries that currently accept PayPal payments for gambling related purposes, but bear in mind that this list can and often does, change quite frequently.

PayPal has been one of the biggest e-wallets in the world for over a decade now, but they, like many companies of this ilk, came from very humble beginnings. In fact, they were originally known as Confinity and were set up in 1998 by Max Levchin, Peter Thiel, Luke Nosek and Ken Howery.

PayPal was actually set up to run as a payment process for the Confinity brand. It was in 2000 when X.com merged with Confinity that the PayPal brand really started to gather pace. The company was owned by Elon Musk and it was he was keen to pursue the payment processing side of the business. In fact, over the next 12 months one of the original CEO’s from X.com disagreed on where they were heading, resulting in the resignation of Bill Harris.

By 2001, the PayPal bandwagon was gaining so much speed that they decided to rename the X.com business, PayPal, before rapidly expanding and finally going public in 2002. They went live at $13 share and managed to generate over $61 million doing so.

But, the companies real claim to fame and probably the reason why many of us now recognise the brand as one of the biggest in the world, was down to the acquisition of PayPal by eBay. They bought the company in 2002 for $1.5 billion and almost exclusively ran this payment process on their site, accounting for over 70% of payments.

The company continued to soar and with it they were able to get in other shops outside of eBay, including Yahoo, PayDirect, Google Checkout and Western Union. They then formed with MasterCard in 2007 to create a pre-paid card that would allow users to use PayPal on sites that didn’t already accept this payment method. By the end of 2007, the company had already been able to generate over $1.8 billion in revenue.

The company continued to buy out competitors and expand, at an alarming rate. By 2010, it was reported that they had over 100 million users in over 25 countries, a number that was considering be quite staggering amidst the online boom.

2011 was the first year that company ventured offline allowing payments to be made in shops and businesses around the world. They were able to access over 7 million stores with their Discover Card, all resulting in a payment processed amount of £145 billion by 2012.