Betdaq was created in the year 2000 by Irish businessman Dermot Desmond and began trading the following year. Like rival Betfair it is a betting exchange, not a traditional bookmaker, meaning you can bet and lay selections and your money is matched with fellow punters, not bookies (although bookmakers do use the site too). Because there is no profit margin for the bookie – Betdaq taking a small commission from winning bets – odds can be larger than at conventional bookmakers and on outsiders often massively so.

In 2012 Betdaq was purchased by gambling behemoth Ladbrokes. It is still based in Ireland, although the registered office is in the Channel Islands, the site being licensed and regulated by the Alderney Gambling Control Commission. Already a sizeable company with a good reputation and wholly trustworthy, the acquisition by high street giant Ladbrokes gives yet more respectability, not to mention financial muscle, to the Betdaq brand. 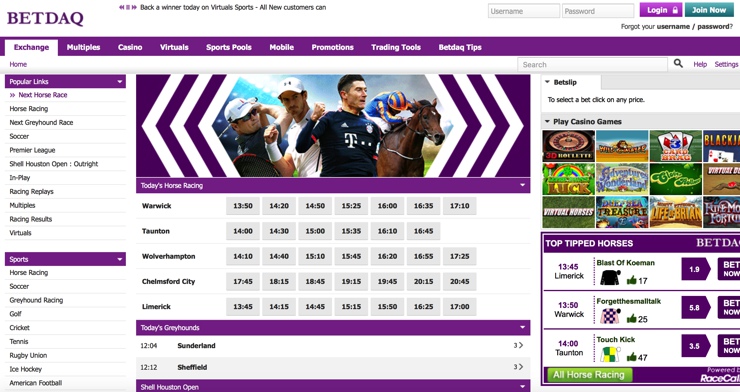 Where Betfair’s advantage lies in having a betting exchange, this is where Betdaq’s disadvantage lies in the betting industry. The thing is, Betdaq can’t really control their pricing structure as it’s all via an exchange, which in turn means that it’s punter 2 punter. This can work in one of two ways, either the price you are going to be getting will be great or it could be totally shocking. Sounds pretty obvious, but these limitations from Betdaq means that whilst they could be a good choice, the site comes with a level of unpredictability and are likely better utilised by using them alongside another bookmaker, just in case.

The market coverage is fairly good on site, although comparing to Betfair (which we have to do due to the fact that they are pretty much the only dedicated exchanges in the industry) they cant really compete. At the time of writing only 15 sports are available to bet on and whilst this number is reasonable, it doesn’t compete in all honesty. The thing that also lets them down is the number of markets for each sport, outside of football and horse racing, is fairly poor. 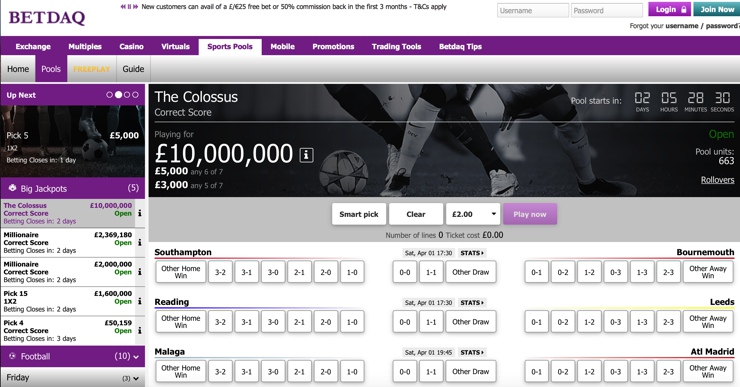 Betdaq are a great option for those looking for the very best odds out there. Like Betfair, they work by linking fellow punters with one another, those who want to back a selection and those who want to back against it. By cutting out the bookmaker the odds can be much higher than you will find elsewhere, especially if you like backing outsiders.

The biggest criticism of Betdaq has been the lack of liquidity, meaning that you can’t always get your bets matched because there aren’t enough customers and hence nobody to form the other side of the bet, especially on less popular markets.

This looks set to improve under Ladbrokes’ ownership, as does the fact that Betdaq are not the most generous with regular promotions. It would also be nice to see Ladbrokes’ live chat facility rolled out to the exchange – at present it exists but only between the hours of 10am and 6pm.

These negatives aside Betdaq remains a great site with worthwhile sign up offers, a good mobile site and exceptional odds – in other words, well worth a visit.

Betdaq do offer their customers the chance to bet in play, but to be honest, it’s one of the weakest parts of the sportsbook. The range of sports is actually pretty good, with tennis, cricket, football, rugby and plenty other sports all being included. The problems arise when you start to tap into the number of games that are on offer and it’s here where Betdaq are relatively poor, especially when compared against the competition.

The exchange is the sole makeup of Betdaq and it’s here where they can offer something different to that of the majority of bookmakers. The site includes a good range of sports to bet on and also a very solid range of markets within those sports. The problems arise when it comes to the liquidity of the markets on offer. Due to the smaller database of players, if you are looking to bet on any lesser or niche betting markets, then the amount you can wager or even the odds that you can get, might be limited.

Betdaq don’t have a stats section in the traditional sense, which is a shame, but they do include a number of tools that you can use to improve your time on the site. These range in quality to be honest, but do include things like Bet Angel, Gruss, Geeks Toy, BetBot Pro and BQ Bot Manager. As they are third party tools, Betdaq don’t actually have any control over them, but they must at least be good enough for Betdaq to publish them on site, so worth giving a go.

Betdaq are a betting exchange and probably the biggest rival to Betfair in the industry. Founded in 2000 by Dermot Desmond, the company were a part of a group of gambling sites that were designed to be produced to allow a group of friends bet together. The group then rapidly grew and in turn the Global Betting Exchange (GBE) was born. The growth resulted in the company to upticks from it’s Irish roots and relocate in Alderney. This also saw a change to the name of the group, which now resides under Global Betting Exchange Alderney Limited (GBEA).

In February of 2013, Betdaq were acquired by that of Ladbrokes for £30 million and it’s been their goal to increase the current market share of 7%. The company currently employ 200 people doted around the world, and whilst the company are still a strong betting exchange, the market share they have is pretty small in comparison to their main rival, Betfair.

The company have managed to pen together some impressive sponsorship with a number of high profile sports teams and venues over the years. These include Kempton Park Racecourse, Celtic Football Club and London Irish Rugby Club.