Betfred is a fast-growing bookmaker that is now one of the biggest players around. Their origins stem from a single shop in Salford, from which Fred Done started out with his brother Peter in 1967. They now operate over 1350 bricks and mortar shops, employ over 8500 people and are one of the biggest horse racing sponsors going, as well as having close links to other sports.

Headquarters are in Lancashire but the company is technically owned by Petfre (Gibraltar) Limited and is licensed and regulated by the government of Gibraltar and Gambling Commission.

They are a huge company, offering the full gaming experience, from sports betting and casino to poker, bingo and games. Staying true to Fred’s Manchester United-supporting roots they are particularly strong on football but cover just about every other sport too.

The welcome bonus is a £30 free bet PLUS 30 free spins. It is given after you wager £10 at odds of evens (2.0) or more. You can place the bet on any market on any sport, provided the minimum value and odds requirements are met (for multiples the cumulative odds must be evens or more). The bet must settle within 30 days of being placed, and the bonus will be credited after 48 hours.

You have 14 days to use the freebies and whilst there are no minimum odds stated for the free bet, the stake is not returned with winnings. This offer is only available to users in the UK (including our friends in Northern Ireland), and there are some payment method exclusions (namely paypal, ukash, neteller and moneybookers/skrill).

Click Here to Claim
The legal stuff - Bet £10 for £30 in free bets and 30 free spins. Minimum odds are evens. Free bets credited within 48 hours of your bet settling and expire after 7 days if unused. Some e-wallet payment methods are excluded. New customers only. T&Cs apply. 18+.

You know that when you use any of the most established bookmakers in the industry, you are going to be getting around the best price going. Betfred is no different and they have managed to price just about every market that we tested right up with the best. Whilst they stand out on an ‘overall’ level in that they just do everything really solid, Betfred are probably best utilised for markets such as Goals Galore and Double Delight, where you will often find a sizeable increase in odds with these types of bets over the competition.

The market coverage probably lets Betfred down somewhat, and holds them back from becoming one of the top 3 bookmakers in the industry. They have a huge emphasis on football and horse racing, which isn’t uncommon, but it kind of overrides the rest of the site for us. Don’t get us wrong, if you want to bet on tennis, golf, cricket, American sports and more, you definitely can do, with the market coverage being more than reasonable, but compared to the likes of be365 and Coral, the bookmaker doesn’t quite reach those standards. 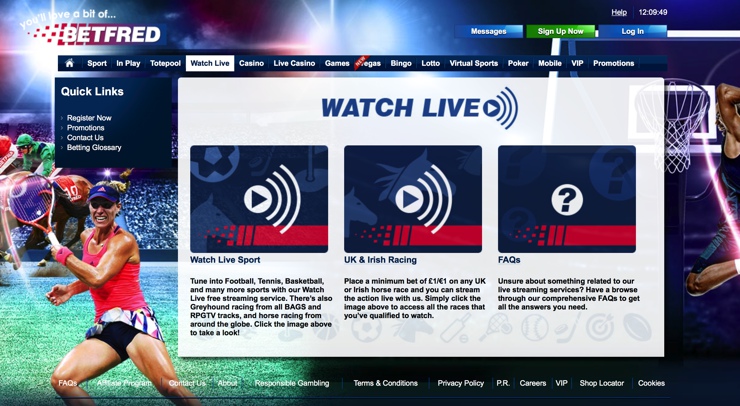 As mentioned, Betfred are a huge company and accordingly they offer all the little extras that make the best bookmakers what they are. Customer service, whilst not always the most knowledgeable out there, is available 24/7 by all the usual methods, including live chat.

There is a reasonable but not exhaustive online FAQ and help section, as well as an excellent stats facility for football fans called the Football Analyser. This gives loads of information on upcoming matches and helps you highlight value. Racing fans will enjoy the interactive race cards whilst there is live commentary of a number of sports, including football and horse racing.

The site itself is nicely designed, quick and easy on the eye, whilst the in-play console and mobile site are also far better than average. Overall Betfred is a really top notch bookie with great free bets and promotions and very solid odds.

As one of the biggest bookmakers in the world, you would expect Betfred to have a more than adequate in play betting section, and that’s exactly what they have! Once you get over the poorly designed website, the content that is on offer is really top notch. They cover a huge number of games from around the globe with football and it’s here where you are going to be most impressed with this section of the sportsbook.

Out side of football you get a good, but not quite as good range with other sports, but the likes of tennis, basketball, American football and ice hockey should all get welcomed mentions, with great sections for each.

The live streaming section is one of the newest additions to the bookmaker and with this you’re going to be able to watch live games from football, tennis, basketball and many more throughout the channel. To access this section you simply need a funded Betfred account and away you go. You can also gain access to live streams of dozens of horse races each day from their access to At The Races, but for this you will need to have wagered at least £1 on that race to view it.

Cash out is now on offer from Betfred as well, meaning that you can access this section with just about any bet that you place on site. All games that are accessible for this function are highlighted with a cash out symbol, so you should never really be in doubt either way. The pricing is also considered to be one of the best with Betfred, with reports that punters are getting a better cash out offer than most of their competitors. 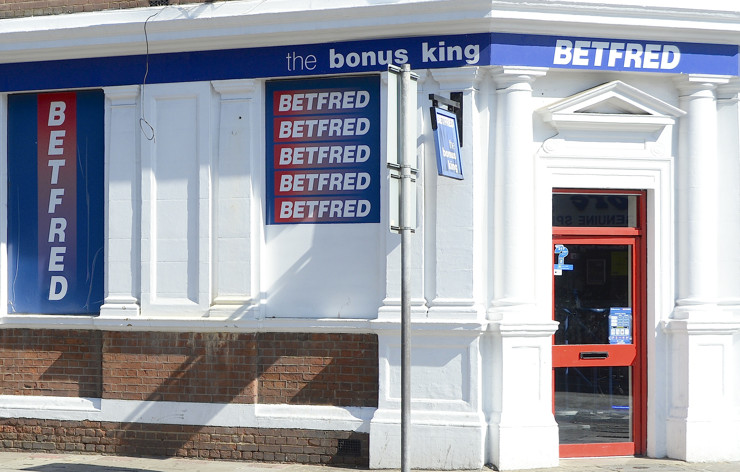 Betfred are still one of the most popular high street bookmakers, still running a vibrant shop community with stores ranging up and down the UK. In total they have around 1,300 stores, with the majority based around Liverpool, Manchester and London. Whilst this isn’t as many as the likes of Ladbrokes and Coral, the company are easily within the biggest in terms of market share for high street bookmakers.

The company’s acquisition of The Tote has been one of the biggest success stories for the shops. As many of the older generation of gambling still like to use betting shops such as Betfred, The Tote is usually linked with the same sort of generation. As punters were keen to see how Betfred were going to revive this once mainstream form of betting, Betfred picked up a mass of new punters of the back of this purchase and in turn, revived several betting shops owned by The Tote and also within existing Betfred stores.

What’s been impressive to see from Betfred is that the number of stores that they host across the UK are continuing to offer new features. The company were of the first to offer fixed odds betting terminals and they have targeted promotions linked with their online site, for punters coming through their betting shop doors.

Betfred are one of the most iconic brands in the online gambling sector. The company were famously founded by brothers Fred and Peter Done in 1967 and started life on the high streets where they still very much operate.

They are based out of Salford, England and are one of few bookmakers not to uproot the company and shift to foreign shores in search for softer tax laws. Whilst this option would have almost definitely been discussed at some point by the powers that be, the decision to remain in the UK has meant that they are seen as a very British brand, with both brothers picking up awards for services to UK business.

Betfred had seen some of the biggest growth in the history of online bookmaking. In 2003 the company announced that they had seen revenue reach an all-time high of £550 million, but just twelve months later they announced that this number had reached an astronomical amount of £3.5 Billion.

What’s been impressive to see from Betfred is that they have always been a forward thinking bookmaker and one that has continued to grow. This was highlighted in 2011 when they bought The Tote for £265 Million in an attempt to revive what was in all fairness a dying sector of the gambling industry. As a result, Betfred pledged to plough over £150 Million into the horse racing sector over the next 7 years. On top of this, Betfred, have been associated with the likes of Wembley Stadium, Haydock Park, Kempton Park, Nottingham Greyhound Stadium, Ovlerton Stadium, World Snooker Championship and many more sport events and venues.