BetVictor – formerly known as Victor Chandler – are one of the best bookies around and underrated in our opinion, but more of that later. They were established in 1946 by the father of the current boss, also called Victor Chandler, although the origins of the company go back further to when his father, William, opened Walthamstow Greyhound Stadium in 1925.

In 1975 Victor Junior took charge and almost straight away showed a passion for invention and innovation. A pioneer of offshore betting, Victor moved his entire operation to Gibraltar in 1996 and this was instrumental in the UK changing its regulations on gambling taxation.

Today the business has a turnover of £1bn, operates in a number of languages with over half a million customers in about 160 countries and they offer poker, casino, games, bingo and, of course, sports betting products. “The Gentleman Bookmaker” has come a long way from the Walthamstow dogs! 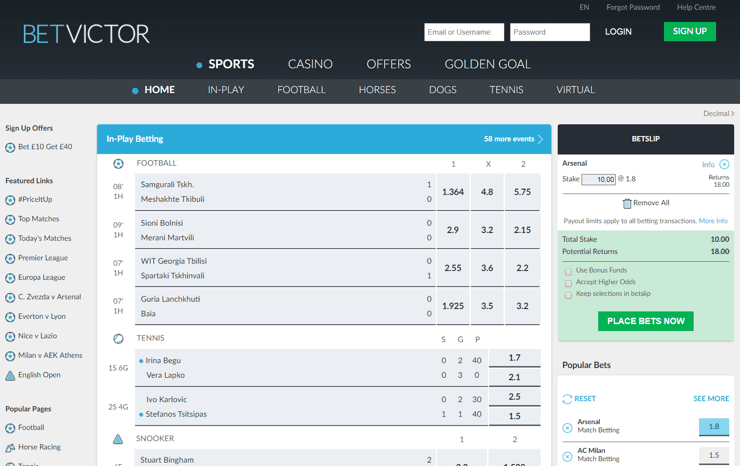 BetVictor’s opening account bonus is made up of £20 in free bets plus a £10 casino bonus, which you'll receive after betting £5. So bet £5 and get £30 worth of bonuses. Simply open an account and place a £5 bet at evens (2.00) or above within 7 days and you will be credited with the bonus.

Click Here to Claim
The legal stuff - 18+ New Customers only. Deposit, opt in and place a £5 qualifying bet at odds of 2.00 or greater within 7 days of opening a new account; excludes cashed out bets. Receive 2x £10 Free Sports Bets, valid on set events only at odds 2.00 or greater, expires in 7 days.  Plus a £10 Game Show Bonus, selected games, wager 40x to withdraw a max of £250. PayPal and Card Payments only. Geographical Restrictions and T&Cs Apply. Please Gamble Responsibly. #ad

It could be argued that BetVictor have set up a brand on the back of offering the best prices in the industry. Their structure is second to none and they have even won awards from major odds comparison sites paying tribute to their consistency in being best price. Football is the companies bread and butter and if you are looking to bet on football, there is very little competition for BetVictor at the minute. Time and time again they come out on top of what’s an incredibly competitive marketplace. It’s especially good if you are looking to place accumulator bets as the slight increase in single prices, really do add up when betting on multiples.

The market coverage is probably the weaker part of the two variables for BetVictor. Like so many, football is brilliantly covered, and we don’t feel as though you will ever need anything more than what they offer. There does feel like there has been a trade off with other sports though and in a not too dissimilar fashion to Betfred, whilst the majority of sports are on offer and coverage will be fine for most, if you are specifically targeting niche markets from a sport, then you may need to look elsewhere. 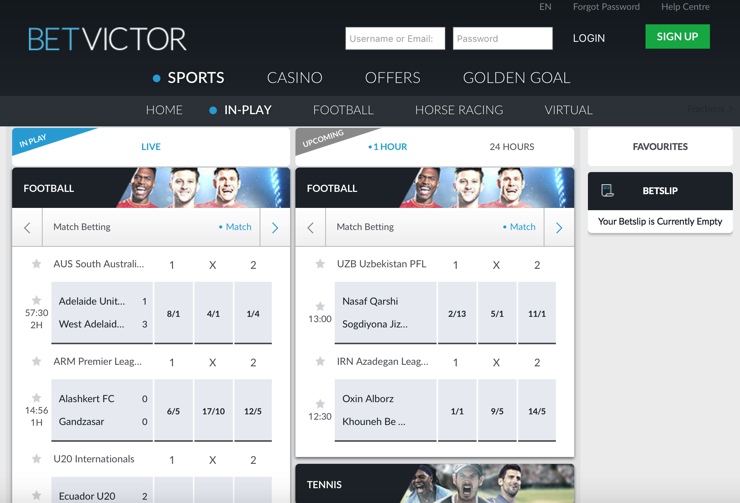 As one would expect of a bookmaker who prides themselves on innovation, BetVictor offers a whole host of little extras. However, they also do the basics right and it is for that which they should be commended.

Their customer services provision is excellent, their website is really clean and easy to use and their odds are pretty much the best around across a wide range of markets, especially for football. They don’t always get the credit they deserve for that latter point but serious punters should take note.

Throw in a good online help centre, a simple but effective mobile site, an excellent dedicated live betting suite and plenty of horse racing on live steaming and you really do have a top notch bookmaker.

The in play betting section at BetVictor is one of the best in the industry. What really sticks out for us is the design of it and the ease in which you flick between matches or even sports for that matter. The range of sports is good, but they don’t vary too much from your bread and butter football, tennis, golf and American sports. We aren’t saying that they don’t offer up other sports, but the coverage for each is noticeable.

At BetVictor, one of their latest features is that of the cash out option that has become so popular with sports bettors. It’s great to see that they have embraced the partial cash out option, which allows punters to simply cash out a portion of their bet, letting the rest of it run. The feature can be used on a number of markets, although at the minute it is limited to football and tennis. They do highlight which markets can be used for cash out though, so you will know before placing your bet.

The stats section at BetVictor is run by Goals Feed and it’s one of the best in the business. What we liked was that the fact that it included line-ups of both teams, results from last 6 matches, head to head result, and recent league form, breaking down if games had seen over/under 2.5 goals, clean sheets, failed to score, scores first half and loads more. This is the best way to come up with the best bets possible, and an invaluable feature from BetVictor.

BetVictor are probably one of the most influential brands in the betting industry. They have a very familiar history in that they were formed in 1946 by William Chandler who opened his first store in London. Growth in the company was steady, without ever being huge, before his grandson, Victor Chandler (of whom the company was later named after before rebranding in 2014 to call it BetVictor) decided to shake things up a little.

Victor was starting to take bets from oversees businessmen who were unable to wager in their own countries. He then saw an opportunity to upheave his ever increasing bookmaker and relocate in Gibraltar to avoid having pay UK taxes on the wagers that they were placing. This in turn started a mass exodus of bookmakers from the UK over to the likes of Gibraltar and has been widely recognised as the start of the online boom.

The company were a fairly large brand on the high street for many years, but these almost all of their betting shops have now been sold and they are predominantly online. But, they do offer up ‘Betting Lounges’ which are doted around a number of well-established areas in the UK. These lounges were a place where the rich and famous were able to come and wager in a more appealing place than your usual high street bookmaker. Its doors are opened to anyone who is willing to wager substantial sums of money and are your high class betting shops, if you will.

The high street game looks pretty much done and dusted for BetVictor as they continue their dominance in the online sector. Whilst some other bookmakers that we have mentioned on this site are still working hard to be a high street brand, BetVictor are very much seen as the example of how the high street industry is heading and where bookmakers will start spending the majority of their time and resources.

BetVictor are one of the best known bookmakers in the industry these days, but you may or may not be aware that they started life under the name, Victor Chandler. The company have been about since 1946 when a chap called William Chandler started it. In 1974 the company got passed down to Victor and from there they haven’t looked back.

The business is now run by Michael Tabor, who was the driving force behind the name change from Victor Chandler to BetVictor in May, 2014. The business side of things are now firmly run from their headquarters in Gibraltar. Interestingly enough, it was in fact BetVictor who were one of the first companies to up sticks and move abroad. The initial idea was that it was a way in which they could legally allow wealthy business from around the world to wager on sports, but it then soon turned out to be profitable to make this the case for all their sports betting sector and so, in 1998, the company moved to Gibraltar and haven’t looked back.

Over the years, BetVictor have put their name to countless sporting events and venues. Some of the higher profile ones include Victor Chandler Chase at Royal Ascot, The Welsh open (snooker), World Matchplay Darts, Queen Mother Champions Chase (Cheltenham Festival) and many more. They have also been keen to get brand ambassadors on-board such as Michael Owen and became an official betting partner of Liverpool FC in 2016.