Important: Stan James Online has now closed with all accounts migrated over to parent company Unibet. If you have accounts at both Stan James and Unibet then we believe they have been merged (or will be), check your emails for notification of the move.

Stan James are one of a host of bookmakers to have jumped ship from chilly England to the warmer climates (and more favourable tax conditions) of the Mediterranean, in their case Gibraltar. Since doing so – in the mid-1990s – they have grown dramatically, thanks in no small degree their ability to attract internet users to their online offering.

With a fine heritage and a strong commitment to all things sports, Stan James offers a vast array of markets on all the usual sports. They have a strong focus on football and horse racing but also offer markets on many sports that are not traditionally seen as ‘betting’ sports, for example cycling, athletics and even bowls. 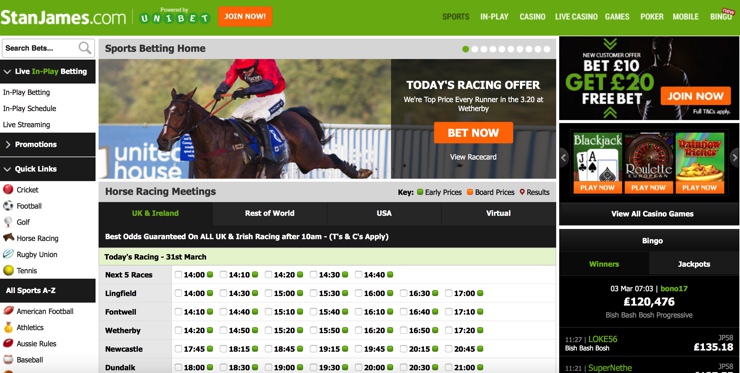 Stan James is one of the best known sportsbooks in the industry. But, it’s pretty weird that a company of their size and the amount of time that they have been about have never really managed to reach the height of many of their competitors. Well, we think that has something to do with the pricing structure on offer. We aren’t going to say it’s terrible, because it isn’t, but it’s not good. We would say that on the whole they are about middle of the road for odds, although having said that their football pricing seems much stronger than the rest of the bookmakers odds. Don’t get us wrong, we are slating Stan James here, but we would expect more a company that has been around as long as they have.

Market coverage on the whole is actually really good. What’s kind of refreshing from Stan James is that they aren’t totally cantered around football betting, and whilst the sport is probably their most popular – as it is with most bookmakers – other sports such as tennis, horse racing, golf, cricket and American sports all get really good run out as as well. What was interesting to see from an upcoming Premier League football match is that the game had 35 more markets then that of bet365 just an hour before kick off; impressive to say the least! 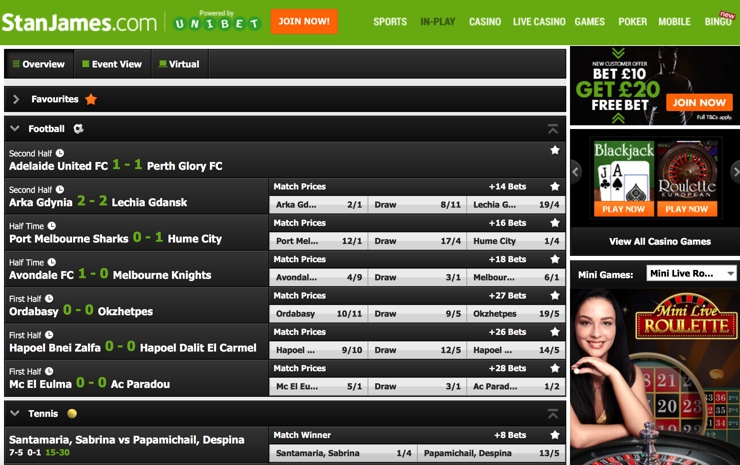 Where Stan James come into their own is their clear investment in the experience of their customers. Despite the slightly garish green, their website is as effective as any and presents information in a clear, concise manner.

They have an excellent in-play betting section with the site which incorporates a live streaming facility that covers a wide range of sports, from football to rugby league, basketball to cricket. Betting in-play is also available within their very effective mobile offering, a slick app that is available on Apple, Android or Blackberry devices.

A feature that we have found to be particularly useful is their newly launched NagMe horse racing service. It allows you to receive alerts every time a horse, jockey or trainer you designate runs, rides or saddles. It also provides horse racing cards, tips and even lets you make your own notes to help you keep track of your favourite horses.

The in-play betting section at Stan James is probably the best feature on the site for us. The section is crammed with sports, but what’s great is the depth that each of the sports goes in to. The likes of football and tennis are always going to be well covered from a bookmaker with the stature of Stan James, but we were impressed to see over 30 in-play markets for a snooker game, which gives you a good indication of the depth they go into.

You’re going to be able to access a host of live horse races from across the UK and Ireland with an account at Stan James. These guys work in partnerships with both At The Races and Racing UK, meaning that you can literally never miss a race if you choose not to. The only thing you will need to access this race is to have placed a bet of at least £1 on any market within the race. Once you’ve done this, you can access the race to watch on your PC.

You get to access two statistics section on Stan James; one for the horse racing and the other covering pretty much all remaining spots. The horse racing section is a real winner for us and includes loads of information such as alerts for certain horses, racecard’s, daily naps, selections and live odds for each race. It gives you an insight as to which horse has the best chance for that race whilst promotion a small synopsis of how the race might pan out from a horse racing expert within Stan James and sometimes the Racing Post. 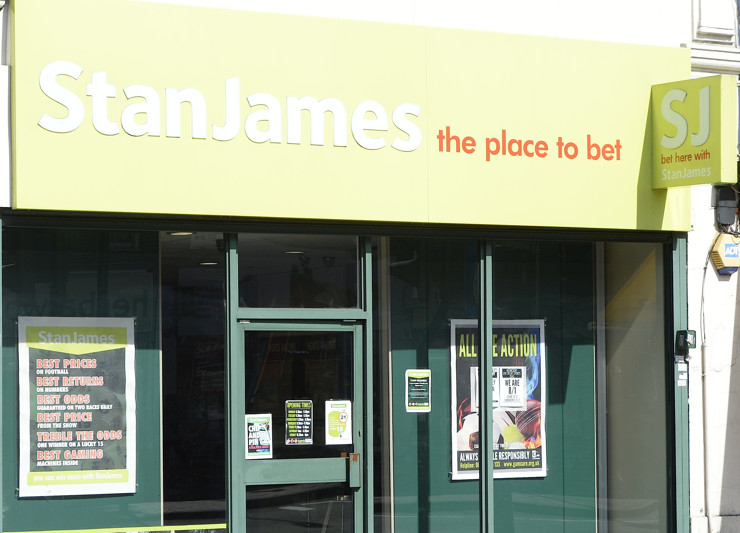 Stan James, like most betting companies, started life as a sole bookmaker in Oxfordshire. The company, founded by Steve fisher and James holder in 1973, soon expanded to create a larger high street presence throughout the 80’s and into the 90’s. They set out by simply acquiring bookmakers that were either small independent models or simply taking over from shops that were already established, with 3 shops purchased from William Hill in the early days that really propelled their high street existence.

These days they have about 90 shops held throughout the UK and are really trying to push their online ventures further forward. What’s been interesting from Stan James is that they have been pretty consistent with number of stores that they hold over the last 5 years. Compare this with industry numbers who claim that over 300 stores were closed in 2014 alone, maintains that the brand is not only well recognised, but also appreciated within the industry.

Future plan from Stan James seem to be more of the same. They realise that they cant compete with the likes of Coral, Ladbrokes and Betfred, but the service they currently offer seems to still be popular in the 90 or so stores they operate throughout the UK.

Stan James is one of the most well-known brands in the betting industry. The company started life with just one betting shop in 1973 and was sounded by Steve Fisher and James Holder. Interestingly, the name of the brand is actually derived from the first two letters of Fishers first name and the first two letter of his wife Anne, with James being that of the first name of Holder. Whilst the company are very much an online and remote bookmaker these days, they still have around 90 betting shops dotted around the UK.

The first betting shop was opening in Oxfordshire, England but the company have moved their operations to that of Gibraltar and now run all business from the island. Stan James is actually part of the SJU Limited Group and is run by CEO Denis Kelly.

Over the years, the group have made a number of acquisitions to strengthen the Stan James brand, including Betdirect, betterbet.com, SJBET and most recently in 2010, Pagebet. 2015 turned out to be a fairly momentous ear for the company as they were bought out by fellow betting group, Unibet Group PLC acquiring all online gaming and betting rights from Stan James.