The sportsbook at Winner has been about since 2013 and in that time the company have made a pretty good transition from a predominantly casino and poker site. What’s been good to see from Winner is that they have a great market coverage, which is often make or break for the smaller companies trying to make a name for themselves.

Throughout this review we will be looking to see how the rest of the bookmaker competes and also to see if they are going to be able to take the next step and challenge some of the more established brands in the industry. 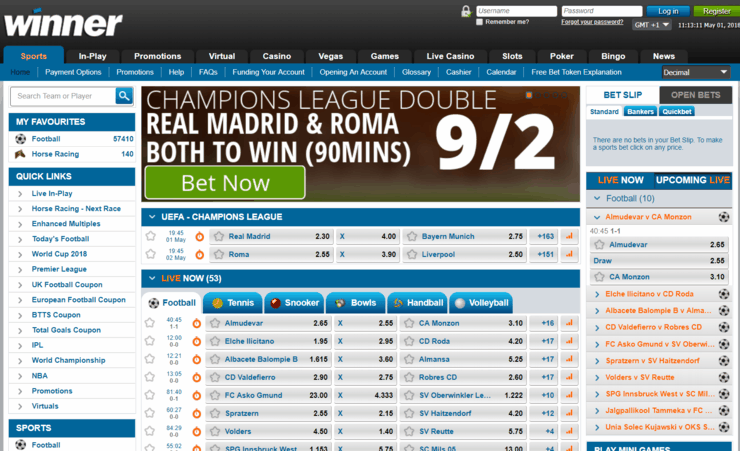 The pricing structure at Winner is pretty mixed to be honest and it seems to be fairly random. For example, we compared a number of matches from the English Premier League within the 1×2 market and found that half the games were about right for this type of smaller bookmaker with the others being way off the pace. Whilst we recognise this isn’t the most scientific of test, we did notice that similar trends occur for both Tennis and Horse Racing markets.

The market converge is pretty much faultless to be honest. They can easily compete with the bigger bookmakers and we only noticed that some of the more specialist markets such as Asian Handicap and novelty markets were really missing. At the time of writing football currently have over 48,000 different markets to bet on, which is a massive amount. We would argue that 90% of punters would be able to bet on their favourite markets, with the rest looking for more specialist, higher profile bookmakers for their bets. 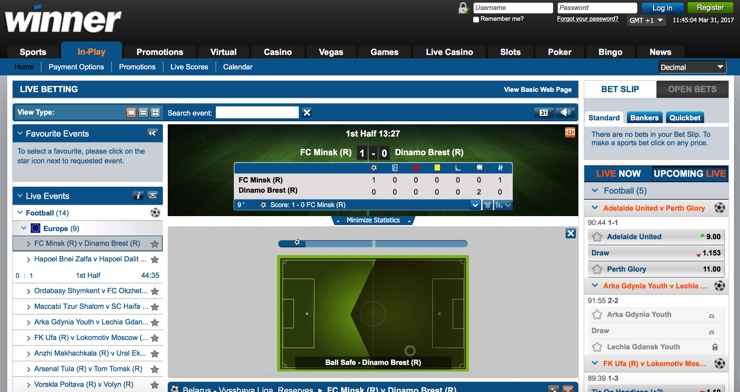 The live betting section is one of the highlights of the bookmaker for us. The range of games on offer was massive and at no point did we ever feel like it was lacking in any way. The inclusion of the match centre is a vital part of it and with it you are easily going to be able to track what’s going on in the game. It goes into much more detail than most match centre’s, especially for sports such as football, which is great a sit almost feels like you are watching live. They offer up a really good range of stats for each match as well, which adds another layer of depth.

The bookmaker serves up a number of price boosts on site as well. The boosts can be as much as 30%, which are on offer to all punters, new and existing. You are going to be able to find these on the homepage, just under the live betting section and if you are looking for value from your bets, this should 100% be something that you need to check out.

The final feature that we want to touch on is the Calendar section of the site. Now, this may sound like a really drab feature, but it’s a great way to plan out your bets by day. We use bet365 and the like an awful lot for our personal bets, and one of the things that really grinds is being able to sort games by certain dates and plan ahead. This means that you can see what’s happening on each day and instead of having to trawl through dozens of leagues or competitions to see what’s on and when, you just ping in the date and it lists everything for you. This wont be something for everyone, but if you are like us and like to be prepared, then it will become a very handy feature indeed.

Winner sports book is one of the most exciting brands in the industry at the minute. The sportsbook has been around since 2013, and whilst that may seem like a fairly short timeframe, the company have actually been about since 2009 an are quickly making huge strides not just within sports betting, but also that of casino and online poker games. They now boast millions of players and have even managed to surpass much more established brands who have been around for a lot longer than Winner.

Winner is part of the PT Entertainment Limited group. The group is small consisting of just Winner and TitanBet. But, for those of you aren’t already aware, TitanBet is a brand that is now well established, especially when it comes to sports betting and poker. What this shows is that Winner now have a team behind them who have already enjoyed success within the industry, so they will know how to push the Winner brand on for years to come.