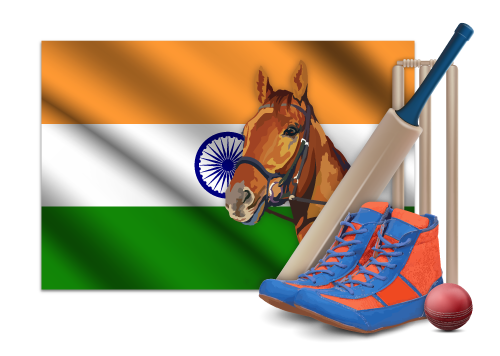 India is a vast and populous nation and whilst it remains relatively poor its economy is growing quickly as the country modernises. Sport, primarily cricket is a major part of that, being a huge component of the nation’s self-image and also a big driver of the economy.

The passion that Indians have for cricket may well eclipse the fervour that any nation possesses for any sport. Cricket is perhaps the one thing that truly unites a nation that is home to at least nine major religions, has huge inequality of wealth and a whopping 22 official languages. Indians may disagree about many things but when their cricket team takes to the field they come together as one and the emotions created are extreme, whether they win or lose.

Of course, in a country of some 1.3 billion people, it isn’t just cricket that gets sports fans excited. There are a vast number of sports played in the country and whilst the Indian Super League (football) can’t really be viewed as a major sporting competition on the global stage, India does host a number of big events that will be of interest to fans looking to visit the country, bet on Indian sport, or both.

If India is home to nine major religions then there is no doubt that cricket has to be considered as the 10th. Most Indians don’t like cricket, they absolutely love it. It is, by some distance, the most popular sport to play, watch, talk about and bet on. Locals will play cricket on the beach, in parks, in the street, in the office, anywhere. The lack of a pitch is no obstacle to a game and nor is the lack of equipment, with poorer Indians happy to improvise in the absence of wickets, a bat and even a ball.

In recent years interest in the longer versions of the game has really dwindled, perhaps more so in Indian than in other countries in the world. Any match against Pakistan will always be a big deal and a major sporting event that will almost stop the entire nation. Other than that Indians are most likely to get excited about watching their IPL (Indian Premier League) side, or watching the national side at either the World Cup or the T20 World Cup.

Pakistan are India’s biggest rival on the international stage, a relationship which goes far beyond cricket, but matches with England and Australia are also ones that have a little extra spice. Before we look at international cricket, though, let’s take a closer look at the IPL.

The IPL was a pioneering cricket tournament established in 2008 and it rapidly became a huge hit, both domestically and internationally. In 2010 it broke more new ground by becoming the first major sporting event ever to be broadcast live on YouTube. The brand is incredibly lucrative and according to the Economic Times is worth around $7 billion. Thought to add around $200 million to the Indian economy, it is broadcast around the world and features many of the best international stars as well as a seemingly never ending conveyor belt of exciting domestic talent.

The IPL typically runs between the end of March and May, and there have been some small changes to the format over the years. Excitement is high and with a relatively small number of games, every contest is a big one, played out to packed stadia, with the volume turned up to 11.

There are currently eight teams, or franchises, spread fairly well out around the country between Chennai and Bangalore in the south and Delhi and Mohali (home of the Kings XI Punjab) in the north. The final is held at a different venue each year and if you are lucky enough to attend you really are in for a treat.

Whilst the IPL has grabbed a huge slice of India’s cricketing pie there is enough love for the game to go around and matches featuring the international stage remain a huge draw. Like all full Test-playing nations, India play a large number of games home and away, across all three formats of the game.

India are invariably at the top, or not far off, the rankings in Tests, ODIs and T20s, their huge population and love of the game overcoming the country’s many issues and lack of funding. Stars such as Virat Kohli, Sachin Tendulkar, MS Dhoni, Virender Sehwag and Kapil Dev attract adulation that politicians can only dream of and are elevated to almost god-like status.

In the T20 World Cup they have the honour of having won the inaugural event in 2007, beating Pakistan in the Johannesburg final. They made the final once again in 2014, this time losing to Sri Lanka. India are next scheduled to host the tournament in 2021, when they will hope to deliver the success their fans demand once again. That will be a truly major sporting event, so if cricket is your thing, don’t miss out.

Horse racing in India dates back well over 200 years, and is growing more popular in terms of attracting bets from international punters too.

Racing is almost exclusively on the flat in India and takes place at a number of courses around the country which are run by major turf clubs:

As one might expect given the era in which racing began in the country, India hosts versions of the five British Classics. Mumbai, under the auspices of the RWITC, hosts four of the five races, the Indian Oaks, the Derby, the 1,000 Guineas and the 2,000 Guineas; and the same organisation runs the St Leger, though this is held in Pune.

In truth, none of these races or the other (relatively) big ones held in India make much of a splash globally. However, for Indian fans of the sport these, and events such as the Invitation Weekend and Bangalore Derby, are certainly big sporting events. Moreover, if you happen to be in India, a trip to the races will certainly trump your friend’s trip to Pontefract.

Golf is on the Rise

Golf has been growing steadily in India over the last 20 years or so, partly as a result of the growth in the number of middle class citizens in the country. There is now a local tour, the Professional Golf Tour of India, which sits below the Asian Tour, but the biggest golf tournament in the country is arguably the Hero Indian Open.

This European Tour event was actually first played back in 1964 and the inaugural winner, Aussie legend Peter Thomson, helped establish the tournament he would go on to win on a further two occasions. It has been won by some decent players over the years, including Graham Marsh and Payne Stewart. Typically held in either Delhi or Calcutta (for a long time it alternated between the two), in more recent times it has usually been played in the capital.

The tournament became co-sanctioned by the European Tour in 2015, since when it has been won by local players Anirban Lahiri and Shiv Chawrasia (twice), as well as Matt Wallace and Steven Gallagher. With a first prize of almost $300,000 the field has generally been strong and this gives India golf fans a chance to really experience top level action in their home country.

With the elevated status of the national championship and rise in the number of courses around the country we have also seen an increase in the number of top level pros in India. Lahiri reached the world’s top 40 in 2015, Jyoti Randhawa made the top 100, and whilst India don’t have any golfers inside the top 150 at the time of writing, they have several players who could well get there in the coming years.

Moving from a sport instantly associated with India to one that is far less so, the Indian Grand Prix is one of many newer stops added to the F1 calendar. Over the past 10 years or so, Formula 1 has sought to become far more global in its outlook and the first Grand Prix in India was held in 2011. Sebastian Vettel won that year and, in fact, the German ace has won every Indian Grand Prix that has ever been held.

Vettel won in 2012 and 2013, completing a hat-trick for Red Bull but after a planned one-year break became two, then three, mainly due to a tax dispute, it now seems unclear when we’ll see Formula 1 back in India. There are a number of obstacles but given the increasing economic power of the nation we wouldn’t be surprised to see it return to the schedule before too long.

Tennis is another sport which is growing in India due to middle class expansion. The sport is well established, with the game introduced during the colonial period and the All India Tennis Association having been founded in 1920. India is the most successful Asian nation in the history of the Davis Cup and whilst no Indian has ever won a singles Grand Slam title, many have doubles majors to their name.

As of the 2020 season the only stop of the ATP Tour in India was the 250 series Maharashtra Open, known as the Tata Open for commercial reasons. This hard court tournament was first held in 1996 and has been played in various cities in India. Whilst not a top, top level event, it has been won four times by Stan Wawrinka, as well as by Milos Raonic, Marin Cilic and, further back, Pat Rafter and Carlos Moya.

At the time of writing there is no main tour women’s tennis played in India so the Maharashtra Open is very much the biggest draw for Indian fans of tennis.

Snooker and billiards have grown in popularity in India and the country hosts a fairly major tournament in the game of snooker. The Indian Open is a ranking event and although only established in 2013 it has been won by players of the calibre of Ding Juhui and John Higgins, the former beating local favourite Aditya Mehta in the first ever final.

The tournament has seen a 147 and the defending champion is Englishman Matthew Selt. With a prize fund not far shy of £400,000 this is a tournament well worth the trip and as snooker continues to expand it is possible that further tournaments may be added.

Other Sport in India

There are many sports in which India excels but which lack wide global appeal. There are a number of traditional Indian sports that are played almost exclusively in the country or the wider region, with kabaddi by far the most well-known. This was actually televised in the UK for a while and is the second most popular sport in the second most populous country in the world, which makes it pretty big!

There are many other less well-known regional sports, many that include animals but in terms of more mainstream activities, the likes of hockey, archery, shooting and badminton are all very popular in India. Indeed the shooting and archery of the 2022 Commonwealth Games will be held in India, despite Birmingham being the host, after India threatened to boycott the games if those disciplines were not included!

India fully hosted the 2010 Commonwealth Games – Delhi doing the honours – the only time the country has hosted a major international sporting event.