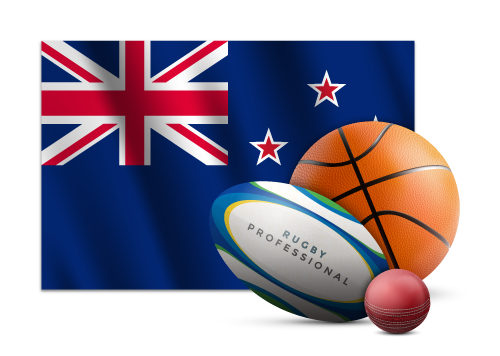 New Zealand is a beautiful country with stunning scenery, amazing wine and fun-loving, laid back people, but it is also a nation that loves sport. With apologies to many Kiwis who are reading, it does, in some ways, remain a little in the shadow of antipodean neighbours, friends and bitter rivals Australia. To a degree, that is the case when it comes to sport but, as we shall see, not necessarily when it comes to all sports.

Most sports fans think of one thing when they consider New Zealand: the All Blacks. It is true that the national men’s rugby union side holds an almost mythical status and that is the case both in NZ and indeed around the world. However it would be wrong to think this picturesque nation of islands is only about the All Blacks from a sporting point of view and here we consider all the major sporting events held in New Zealand.

Rugby is a Religion

Whilst NZ does have more to offer than just rugby it would be wrong for us to start anywhere else. It is no exaggeration to say that rugby is a national obsession and for many it has a more important role than religion. From an incredibly young age most Kiwi kids are desperate to represent their nation and virtually grow up with the oval ball in hand.

The All Blacks is the name given to the men’s team in the 15-player code of the game and they are adored by Kiwis and feared by just about everyone else. Whenever they play, it is a big sporting occasion in New Zealand but certainly watching them do battle with Australia, England or the British Lions is a particularly special occasion.

The Rugby World Cup is also a huge highlight and has been hosted or co-hosted by New Zealand on two occasions. Their full and impressive record at the competition can be seen in the table below.

All Blacks’ Performance at the Rugby World Cup

It says a lot about the country that many New Zealanders would feel the record above is a disappointment. Certainly making the final is the minimum many fans expect and so despite only ever missing out on the semis once, and winning three out of four finals, some Kiwis will certainly argue they have underachieved.

Considering the population of NZ is less than five million, however, most rugby fans believe what they have done is nothing short of incredible. England has a population of around 55 million, France has well over 65 million and even Australia is home to almost 25 million people. Whilst those three countries devote a lot more time and effort to a wider range of sports than does New Zealand, the All Blacks are still a phenomenally good team.

The All Blacks are the side Kiwis care about first and foremost but club rugby in NZ is very possibly the best in the world. The country has five sides in the southern hemisphere competition called, rather prosaically, Super Rugby and it is an event they have truly dominated.

The competition has changed format and name a few times over the years but what hasn’t changed is the Kiwi supremacy. Since it developed into the event we essentially enjoy today, in 1996, a NZ side has appeared in the final on 26 occasions. South Africa sides are next best, with 11 appearances between them, ahead of Australia (10).

The Crusaders, based in Christchurch on the South Island, are by far the most successful side in the event’s history, having claimed glory 10 times and having made the final 14 times out of 24. Those are astonishing stats, and ahead of the 2020 edition of the competition the Canterbury outfit have won the last three editions of Super Rugby, with fellow NZ sides Hurricanes (from Wellington) and Highlanders (from Dunedin) having won the two before that.

Any game in Super Rugby is a big deal in New Zealand so once again, this is a bucket list experience for a fan of the game and a real highlight of sport in the country.

The 13-man code of the game isn’t quite as popular but even so, Kiwis still get very passionate about rugby league. In this code of the game it is Australia who dominate but even so, the Kiwis have hosted or co-hosted the World Cup three times and are the only side to break the Aussie stranglehold on the event in the last nine editions (NZ beat Australia in the final in Brisbane in 2008).

Once again you can enjoy some world class club rugby (league) in New Zealand, with a trip to watch the New Zealand Warriors in Auckland a must for those who prefer this version of the sport. The Warriors are the only side from outside Australia to play in the NRL and this competition is undeniably the pinnacle of rugby league at club level.

The Warriors have made the Grand Final twice, in 2002 (when they won the minor premiership) and in 2011, losing both times. Even so, watching them clash with one of the great Australian sides is a true spectacle and to a certain degree unites the whole nation behind the team.

Tennis has a long history in New Zealand, with the governing body, Tennis New Zealand, having been founded in 1886. There is a local tour but in terms of major sporting events it is the Auckland Open which is probably the biggest on the global stage.

The Auckland Open is a hard court tournament held just before the Australian Open at the start of the year and is an ATP Tour 250 event. Aussie greats such as Roy Emerson dominated the early years of the tournament in the 1960s but Bjorn Borg also claimed the title here. In more recent years it hasn’t quite been as prestigious though, with David Ferrer having won four times over the past decade or so.

Running concurrently there is a women’s International level event which has proved a little more attractive to the game’s top players. Both Serena and Venus Williams have won the title in Auckland, alongside other top players such as Ana Ivanovic, Agnieszka Radwańska and Lindsay Davenport.

Golf is popular in New Zealand and, unsurprisingly, this idyllic land has a number of stunning courses. Over the years they have produced some great players too, with Bob Charles the pick of the bunch, boasting 10 top level tournament wins and 79 professional victories in total. More recently Michael Campbell, Frank Nobilo and Ryan Fox have flown the flag for NZ whilst in the women’s game two-time major winner and former world number one Lydia Ko is a real star.

Players, such as Tony Jacklin, Kel Nagle and Jumbo Ozaki, have won the New Zealand PGA Championship but few international stars now compete in this event. The New Zealand Open is probably the bigger competition, although that too only rarely attracts top players.

A notable exception to that was in 2002 when Tiger Woods teed it up as a tribute to his long-term Kiwi caddy Steve Williams. Aussie Craig Parry, who won a WGC event the same year, saw off Woods and the rest of the field, upsetting sponsors and fans alike who would have loved to see Tiger triumph.

Horse racing is very popular in NZ, with Kiwis certainly partial to the odd flutter. There are a number of courses on both islands and whilst none of the contests held in the country can really be classed as major sporting events in the global sense, there are certainly several offering substantial prize money.

NZ hosts both flat and jumps races but it is the former that are more typical and one of the most important is the Auckland Cup. This two mile, Group 1 contest was first held in 1874 and had a purse of NZ$500,000 in 2019. Inaugurated a later, the New Zealand Derby, run over a mile and a half, is a three year old contest with NZ$1m up for grabs.

There are also Kiwi versions of the Oaks, the St Leger, and the 1,000 and 2,000 Guineas, whilst the Karaka Million races (one for two year olds, one for three year olds) are other lucrative contests, both offering, unsurprisingly, NZ$1m.

New Zealand’s biggest racing claim to fame, perhaps, is the legendary Phar Lap, who was foaled in the country before being trained in Australia. The famous chestnut won 37 races in a long and illustrious career, including the Melbourne Cup, with the last 35 races delivering an astonishing 32 of those victories. Phar Lap is equally revered in both Australia and New Zealand and even had a film made about his stellar career.

The Black Caps is the name given to the male cricket team and they have often punched above their weight. Cricket is the most popular summer sport in New Zealand and once again, taking in a major international against the likes of Australia or England is a genuine highlight.

From time to time the country has produced excellent Test teams (indeed, they are ranked as the second best Test side at the time of writing) and some truly world class players. The likes of Sir Richard Hadlee, Martin Crowe, Chris Cairns, Shane Bond and, more recently, Kane Williamson would push to make a number of all-time lists and they have helped provide major sporting drama in their country.

It is perhaps in limited overs cricket where we have seen New Zealand at their best though and the Kiwis have been incredibly consistent in the 50-over World Cup. They have appeared at every tournament, making the semi finals or better eight times, with their two most recent appearances both seeing them lose in the final. Indeed, their win percentage at the tournament is bettered only by Australia and India. They have co-hosted the tournament twice, with a third sharing of duties with Australia scheduled for the 2031 World Cup.

When it comes to T20 cricket New Zealand have been consistent but less successful. Once again they have played in every T20 World Cup but their best showing from six tournaments is the semi final (in 2007 and 2016). They are yet to host this event.

Other Sport in New Zealand

Kiwis play a whole host of other sports with the nation hosting big events in a range of these. Football is very popular, and whilst the local domestic game is weak, the national side has twice qualified for the World Cup.

New Zealand excel at netball and have enjoyed a lot of success in sailing, both at the Olympics and the America’s Cup, the area around Auckland hosting the latter in 2000, 2003 and 2021. The likes of rowing, cycling and, perhaps less excitingly, bowls, are also sports in which NZ has frequently provided world class performers, whilst basketball is one of the biggest participation sports.