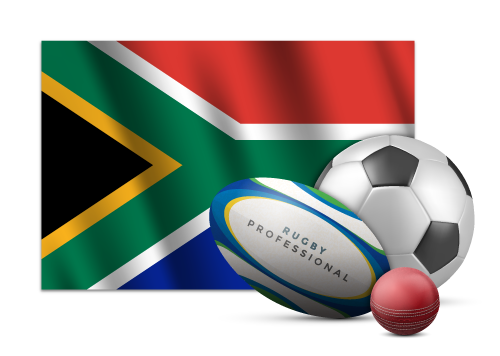 South Africa is a country with a diverse and sometimes troubled history that is trying hard to overcome the damage (on many levels) caused by the racist apartheid regime that ran from 1948 until the early 1990s. Sport has played a significant part in helping to heal some of the wounds of apartheid, both domestically and on the world stage.

As we will come to, the hosting of the 1995 Rugby World Cup was a significant milestone for South Africa as it re-established itself in the international community. And in football, their hosting of the 2010 World Cup brought a real carnival (and vuvuzela-rich) atmosphere to the tournament.

In this article we will explain which sports feature heavily in the South African consciousness, which major events they have hosted or are due to host (whether one-offs or regular occasions) and the sports at which South Africans tend to excel.

The Healing Power of Rugby

As mentioned, when South Africa hosted the Rugby World Cup in 1995 it was something of a pivotal moment for the country… not least because they won it! It was the first major sporting event to be hosted by post-apartheid South Africa, and though the make-up of the squad didn’t exactly live up to the “Rainbow Nation” billing (given that Chester Williams was the only non-white player on the team!), the victory nonetheless helped bring the nation together in support of the Springboks.

This was typified by the iconic moment when the President of South Africa, Nelson Mandela, donned a Springboks jersey before handing the Webb Ellis Cup to François Pienaar, a white Afrikaans and the South African team captain. Many saw this moment as signifying the uniting of the people of the country.

The South African national side have been a real force in the game of rugby union for many years since their first World Cup victory and at the time of writing (April 2020) they were sitting pretty at the top of the world rankings, ahead of the mighty All Blacks (that’s New Zealand, just in case you weren’t aware), England and Ireland.

This is in no small part due to them winning the World Cup in 2019 in Japan, when they beat England 32-12 in the final. That was the third time they have won the Webb Ellis Cup, with the first being the aforementioned 1995 home tournament and the second being their 2007 triumph in France. Their latest victory was also hugely significant as it made them the joint most successful nation in the competition and, even more importantly, Siya Kolisi, South Africa’s first black captain, lifted the trophy as skipper of a truly diverse squad.

Of course, aside from this major tournament success, South Africa hosts various rugby test series, with the biggest games being when the likes of England, Australia, New Zealand or the British and Irish Lions visit. Indeed the British and Irish Lions are set to embark on a three-test tour of South Africa in July and August 2021, with Johannesburg hosting two of the tests and Cape Town the other. Games like these are huge sporting events in the Rainbow Nation and not to be missed.

Club rugby also plays a big part in South Africa, with four sides from the country currently taking part in the Super Rugby tournament alongside teams from Australia, New Zealand, Argentina and Japan. South African hosts the South African Conference section of the tournament with a side from Argentina joining the home clubs.

The Bulls from Pretoria are the only side to have become Super Rugby champions, such has been the dominance of New Zealand (with 17 wins). The Bulls have managed that achievement on three occasions (ahead of the 2020 championship), in 2007, 2009 and 2010. The Lions, from Johannesburg, were the runners-up for three years in a row from 2016-18, in what is generally considered the best club rugby union competition in the world.

While rugby union garners most of the interest amongst fans in South Africa, there is certainly a growing interest in the 13-player version of the game. The national side is nowhere near as strong on the world scene as their union counterparts and in November 2019 they were ranked only 36th of 45 countries, with teams from countries including Chile, Sweden, Netherlands and even Turkey ahead of them! Still, as the popularity of the sport grows we expect things to improve.

While the days of apartheid are long gone, there is still a pronounced demographic split in which section of society generally follow which sports. And while rugby and (as we shall see later) cricket are viewed by many as a throwback to colonial times and the domain of white sports fans, soccer (as football is referred to in South Africa) is definitely the sport of the masses, and particularly of black South Africans.

The fervour with which the South African national team (nicknamed Bafana Bafana, aka “The Boys”) at the 2010 World Cup was something to behold. Indeed the vuvuzela-touting fans gave fervent support to just about any side at the tournament.

The love of soccer is not confined to the black majority though, and the 2010 World Cup served to unite the country through sport in a way that was arguably more effective than the 1995 Rugby World Cup.

While the South African national side are ranked around 70th in the world (similar to the likes of Canada, Panama and Bolivia), they have had some success, most notably their victory in the 1996 Africa Cup of Nations (which they hosted). South Africa last hosted the Cup of Nations in 2013 and there are currently no plans for them to host it before 2027.

Aside from the 2010 World Cup, for which they qualified as hosts, South Africa have qualified for two other World Cups: 1998 in France, where they drew two and lost one and finished 24th overall; and 2002 in Japan/South Korea (where they won one, drew one and lost one, and only failed to progress to the knockout stage of the tournament on goals scored).

Club football in South Africa is relatively strong compared to other countries on the continent. The South African Premier Division, which was founded in 1996, is of a similar standard to England’s League One or Italy’s Serie B, and it has (along with the leagues that proceeded it) produced some very good players over the years, many of whom will be familiar to British football fans. As will some of the club names from South Africa, notably Kaizer Chiefs FC… after whom the band from Leeds were named in honour of Lucas Radebe!

Cricket is the third of the “big three” sports in South Africa, and – like rugby – very much seen as a “white” sport in the country for many years even after apartheid ended. Things began to change in that regard when fast bowler Makhaya Ntini became the first black South African to represent his nation, and things are a little more inclusive these days, though the use of the quota system within the sport has been particularly controversial.

South Africa is one of the top cricket nations when it comes to Tests, one day internationals and T20, and the side is ranked fourth or fifth in world in each format of the game at the time of writing. The national side, known as the Proteas, has never won the ODI World Cup, but has made the semis on four occasions: 1992, 1999, 2007 and 2015. They also made the semis in the T20 World Cup in 2009 and 2014. They co-hosted the 2003 Cricket World Cup with Kenya and Zimbabwe.

South African regularly hosts tours from the other top sides in the world, including the England tour of the country in 2019-20, when England won the Test series 3-1. The tourists also won the T20 series, while the ODI series was drawn. When Australia visit South Africa it is massive occasion, while visits by India, New Zealand, West Indies, Sri Lanka or Pakistan are also well supported by cricket fans across the nation.

Taking in a big game in SA is undoubtedly a major sporting occasion and cricket is almost as famous in the country for its stunning settings as it is for the action on the pitch. OK, that might be an exaggeration but there is no doubting that Newlands in Capetown is one of the most beautiful places in the world to play, or watch, the sport.

The ground itself is a delight, the atmosphere superb and with Table Mountain as a backdrop it really does take some beating. Centurion is also a cracking place to cricket and a tour to SA is a must for any true cricket fans.

When it comes to sporting events held in South Africa, golf is very significant. It is the main home of the Sunshine Tour (which also features events in other African countries), and hosts a number of tournaments that are co-sanctioned by the European Tour.

These tournaments attract some top players, especially the ones that are part of the European Tour. That said, South Africa has incredible strength in depth when it comes to the sport so even the Sunshine Tour events are decent sporting occasions and produce some top notch golf.

There are 15 players from the Rainbow Nation in the world’s top 200 at the time of writing which is incredible. South Africa has produced plenty of fine golfers over the years too, including the likes of the legendary Gary Player and Bobby Locke, four-time major winner Ernie Els, Charl Schwartzel and Louis Oosthuizen.

Horse racing is not as big in South Africa as it is in the UK and Ireland, or even Australia or the USA, but there are some significant races held in the country. At the time of writing there are a total of 34 Grade 1 meetings each year and the first official race meeting was held in the country (before it was a country, so to speak!) way back in 1802.

The biggest races in the country include the L’Ormarins Queens Plate, which runs in January each year at the Kenilworth Racecourse in Cape Town, and the Durban July Handicap, run on turf at the Greyville Racecourse in Durban. These aren’t races that attract global attention in the same way as the Kentucky Derby or Melbourne Cup but they are certainly contests that real aficionados will enjoy.

Other Sport in South Africa

There are various other sports played and watched in South Africa, including tennis, motor racing, sailing, mixed martial arts, hockey and plenty of minor or niche sports.

Formula 1 used to be part of the sports scene of the country with the South African Grand Prix having raced most years from 1965 to 1985 and then again in 1992 and 1993. At the time of writing there are no plans for bringing F1 back to the country.

It has been a similar story on the tennis scene too; the South African Open used to feature on the ATP Tour until 2011. Right now there don’t appear to be any plans to see top level tennis return to the country but that could well change.