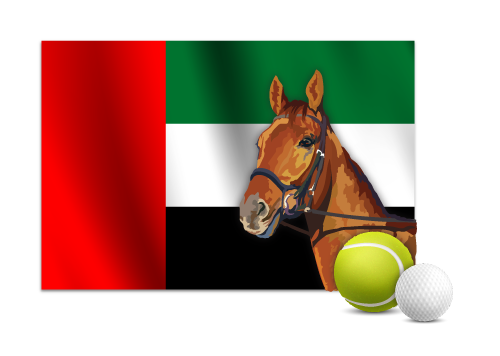 For a long time the United Arab Emirates (UAE) was known for little more than its prominent role in the oil and gas industries. However, whilst nations such as Qatar and Saudi Arabia have only recently sought to expand and diversify their economies, the UAE, spearheaded by Dubai, has been doing so for much longer.

Sport has played a significant part in that, with more and more new disciplines and events coming to the region over the last decade or more in addition to the more well established and traditional sports. Here we will take a look at those sports very shortly but for now let us make a little point for those who spent parts of their geography lessons staring into space or trying to show off to the rest of class.

Whilst the UAE and Dubai are synonymous for some people (who were trying to make Claire laugh in geography), the UAE is a country is made up of seven emirates (essentially like a region or state) and Dubai is one of them. Abu Dhabi is another of the emirates and is the UAE’s capital, with the others being Sharjah… and, for now at least, you don’t really need to know the rest!

Geography lesson over, let’s take a look at the major sporting events held in the UAE!

Horse racing is probably the sport for which the UAE is best known and the Emirates Racing Authority, which organises racing in the country lists five tracks: Meydan, Abu Dhabi, Jebel Ali, Sharjah and Al Ain. When we talk about racing in this region we mean exclusively flat action, with no jumps contests of any note taking place. The country holds a number of huge races that attract global interest and most of the biggest contests are held at Meydan.

Meydan opened in 2010 and is a truly staggering racing venue that any fan should try and visit if they can. Located in Dubai, the 1.6km “land scraper” grandstand has a cantilevered Crescent Roof that is truly spectacular and, less excitingly, also highly energy efficient! The $1.25bn course can host up to 60,000 fans, many of them in exceptional style and comfort and it is a fitting home for one of the planet’s richest race days.

As you can see in the table below, Meydan is home to all of the United Arab Emirates’ Group 1 contests (it also hosts all the Group 2 and all but two of the Group 3 races as well). Whilst it holds a number of classy affairs, there is little doubt that the Dubai World Cup is the jewel in the crown of racing in the Emirates.

This event was very sadly cancelled in 2020 to the pandemic, with the 25th staging of the lucrative contest postponed until 2021. Dubai-born racing legend Saeed bin Suroor, who has saddled 12 UK Classic winners (as of the end of the 2019 season), is the most successful trainer in the history of this race. He has done the business nine times, with Jerry Bailey (four) the most successful jockey in the race’s history.

Globally famous horses such as Thunder Snow, Arrogate, California Chrome and race record holder (in terms of the fastest time) Dubai Millennium, are among the former winners. The race lends its name to the whole day of racing which sees nine contests in total and in 2019 offered an incredible $35m in prize money. A whopping $12m of that was up for grabs in the eponymous contest, with a rather sizeable amount of $7.2m going to winning connections.

The Dubai Turf is perhaps the second biggest race on the card and again it is Saeed bin Suroor leading the way in the training stakes with six wins to his name. Ryan Moore’s two wins put him level with US jockey Gary Stevens as the most successful jockey in the race.

Group 1 Races in the UAE (All at Meydan)

Given the UAE’s reputation for excess and lavish spending, it should come as little surprise that the glamourous international roadshow that is Formula 1 makes a regular stop here. Since 2009 the capital Abu Dhabi has hosted its own race, the Abu Dhabi Grand Prix.

The Yas Marina Circuit was purpose built at a cost of around £800m and hosted its first action little more than two years after construction began. The circuit is on Yas Island (the island itself was purpose built!), a short drive from the capital and around an hour or so from Dubai. It has hosted various motorsports over the years, including Australian touring cars in 2010 but is by far and away most closely associated with F1.

The first Grand Prix in the UAE was held on the 1st November 2009 and this was the first ever day-night F1 GP. Lewis Hamilton began on pole but Sebastian Vettel won and it those two drivers, with five and three wins respectively, who have really dominated at the Yas Marina Circuit.

The Grand Prix has been held every year since its inception as a day-night race, typically at the end of November or start of December as the last race of the season. It is a hugely popular Grand Prix, with fans keen on the facilities and drivers loving the atmosphere, harbour scenery and unique character afforded by the setting sun. Whilst some say the track itself is flat and lacks personality, there is no doubt that the Abu Dhabi is one of the UAE’s number one sporting events.

Golf in the UAE

As well as oil and gas, the Emirates has long been a financial and business hub and few sports are more associated with business and networking than golf. This helps makes golf a lucrative sport and so with the global nature of the game as well, it is was an obvious and perfect addition to the UAE project.

The Desert Swing now takes in a number of countries and events but one of the most popular and historic golf tournaments in the region is the Dubai Desert Classic, held, unsurprisingly in Dubai (at the Emirates Golf Club). Indeed, this was the first European Tour event to be played in the Middle East or Asia, with Mancunian Mark James, who captained the 1999 European Ryder Cup team, winning the inaugural championship back in 1989.

With names such as Seve Ballesteros, Ernie Els, Colin Montgomerie, Fred Couples, Jose Maria Olazabal, Tiger Woods, Henrik Stenson, Rory McIlroy and Sergio Garcia on the trophy it is easy to see just how prestigious this event is. It has gone by a number of names over the years and now has a prize fund of more than $3m. Usually scheduled for the start of the calendar year it really is a fantastic excuse to visit Dubai, take in some world class sporting action and a little winter sun as well!

All Roads Lead to Dubai

In 2009 the European Tour scrapped their Order of Merit system to determine the season’s top player and instituted the Race to Dubai instead. The format and structure of this new end-of-season event has changed several times over the years but at the time of writing the culmination of the series is the DP World Tour Championship (DP being the sponsorship name: they are a local shipping company, in case you have any such requirements!).

The 2019 event saw John Rahm pick up a cheque for $3m, the rest of the elite field sharing a further $5m. Rahm’s success saw him join Rory and Henrik Stenson as multiple winners of the tournament which is held at the Earth Course at the Jumeirah Golf Estates in Dubai.

Not Just About Dubai

Whilst Dubai may host the oldest and richest tournaments in the country, there are more than 20 courses in the UAE and it isn’t just Dubai that hosts top class golf. Indeed, the biggest “normal” tournament in the country usually takes place a week before the Dubai Desert Classic in the capital Abu Dhabi. The Abu Dhabi Golf Championship (currently sponsored by HSBC) has only been around since 2006 but has been part of the Rolex Series since 2019, meaning prize money of $7m and a truly world class field (helped by appearance money, making it even more lucrative for the big names).

Tennis, like golf, F1 and racing, is a sport that appeals to Emiratis’ love of bling, riches and global appeal. The biggest tournament held in the UAE and truly one of the country’s major sporting events is the Dubai Tennis Championships.

Formerly known by a host of other names for commercial reasons, this event was founded in 1993 and is played on the hard courts of Dubai’s Aviation Club Tennis Centre, typically in February. The tournament sees both men and women compete in singles and doubles action and is a prestigious ATP Tour 500/WTA Premier level event.

That means you can expect the world’s best players and that said players will be very handsomely rewarded for their troubles. Since 2003 the men’s event has only been won three times by a non-Big Four (as they were, i.e. Roger Federer, Rafa Nadal, Novak Djokovic and Andy Murray) player. Moreover, two of those three non-Big Four winners, Andy Roddick and Stan Wawrinka, have won Grand Slams!

Other Sport in the UAE

Whilst their domestic football league is of a very low standard and they have enjoyed little success internationally (although they did qualify for the 1990 World Cup… losing all three games), football is the sport that many local people love the most.

National airline Emirates sponsor football and top teams extensively, whilst the Abu Dhabi United Group bankroll Manchester City. However, whilst the odd big exhibition game or friendly has been played in the Emirates, no football of real note takes place.

Cricket is another sport that is played at a low level in the country but due to the huge number of expatriate workers living there it is massively popular. Around 90% of the UAE’s population is from elsewhere, with the majority of those being from India, Pakistan or Bangladesh, that is, nations that absolutely love cricket!

The UAE national side has played in a number of major international tournaments, including the 1996 World Cup, 2015 World Cup and 2014 Twenty20 World Cup. Almost all of their players were born elsewhere, mainly in South Asia, but there is no doubting the appeal of the sport.

Whilst the UAE national side has performed well, perhaps the biggest cricket matches to ever take place in the country have been between other nations. Due to security issues in Pakistan, they have played much of the “home cricket” in the Emirates for over 10 years.

In March 2009, the Sri Lankan cricket team were attacked in Lahore by a terrorist group, with six players being wounded and a number of police and civilians killed. Following the attack a number of events, including various tours and the 2011 Cricket World Cup, were moved elsewhere with the UAE ultimately becoming a home away from home for Pakistan.

Various grounds have been used in the country, with Test matches being played at the Sheikh Zayed Cricket Stadium in Abu Dhabi, as well as in Dubai and Sharjah. The dry, turning wickets have proved tough for visiting teams, with Pakistan performing well against the likes of England and Australia. Pakistan once more greeted visiting teams to their country late in 2019, starting with Sri Lanka. Great news for them but less so for their many Emirates-based fans.

As well as cricket and football, the UAE has also hosted a number of other sporting contests. Whilst none of these would count as truly major sporting events on the global stage, the nation has become a rather unlikely hub for Jujitsu, an even less likely home to a growing interest in ice hockey and also hosts regular tournaments in table tennis, rugby and more traditional sports like falconry and camel racing.