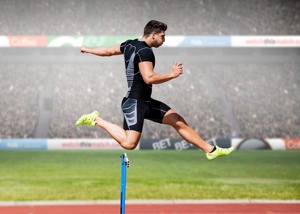 Athletics is one of the most enduring sports there is and with a long and illustrious history (all the way back to 776 BC!) it is one of the world’s most popular sports, enjoyed on all continents by both men and women. It covers a wide range of individual events, with by far the most prestigious being the 100m sprint, although at the other end of the spectrum marathons also have huge global appeal. Athletics covers track and field events (various stadium running, jumping and throwing disciplines), as well as road running and walking and cross country.

Athletics as a betting event is something that grew massively in the run up to the 2012 Olympic Games. Given the games were in London there was a huge surge in interest from the British public and from many of the UK-based bookmakers. Athletics is not generally a huge sport when it comes to betting. However the major events like the Olympic and Commonwealth Games and various world championships do generate a good level of public and therefore bookie interest and there is rarely a long wait for one of those big championships.

How To Bet On Athletics

Betting on athletics is generally a simple and straightforward affair, with most bets centred on who will win any given event. There are a small selection of other markets also available, as detailed below.

Because there are relatively few markets to choose from the rules are fairly straightforward. Bets will invariably be settled on the official result as per the medal ceremony, with subsequent appeals or disqualifications being irrelevant. It is also worth noting, when betting on medals, that some events award two bronze medals and overall stats are calculated using official medals tables, with team events only contributing one medal towards the totals. The only other major thing to watch out for is if bets for future events are classed as ante-post (and whether non-competition of your selection thus constitutes a losing bet) or if, as is sometimes the case, they will be voided (and refunded).

There are few simple or effective strategies that can be applied to betting on athletics unfortunately. There are some, however. For instance, it is quite often the case that distance races at major tournaments become tactical affairs rather than world record-challenging runs, so backing those who you know to have a good “kick” over those who have the fastest times but are sluggish in comparison on the last lap is worth looking at. For multi-event athletes, such as Jessica Ennis, the absence of injuries is crucial to performing at the top level so finding out about any niggles athletes may have before the bookies find out could be very useful (though not always that easy of course, unless you hang around Latvian or Swedish training camps).

Some basic ideas and rules that we can use include general research and the accumulation of knowledge on specific athletes, venues and even the prevailing weather conditions in a particular location. Following the form of an athlete throughout the season is crucial, however, also being aware that train to peak for the big events is equally important. This latter point is a good way to obtain value should a favourite underperform in events leading up to a major championship. It is also worth being aware that certain stadia and particular road tracks will be faster than others, which can lead to some opportunities for betting on records.