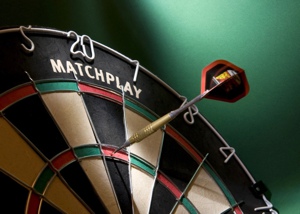 While darts is often disparagingly dubbed a “pub game”, you only need to throw a few arrows yourself to gain an appreciation of the skill – and practice hours – required to get to the pinnacle of this popular sport.

With darts tournaments run by both the British Darts Organization (BDO) and the Professional Darts Corporation (PDC) increasing in popularity with spectators and gamblers alike, there are plenty of options when it comes to betting on – and winning money from – the sport. Read on for our guide to the types of bets you can place and some strategies to help you win when betting on darts, so you can hit the bullseye with your wagers.

How To Bet On Darts 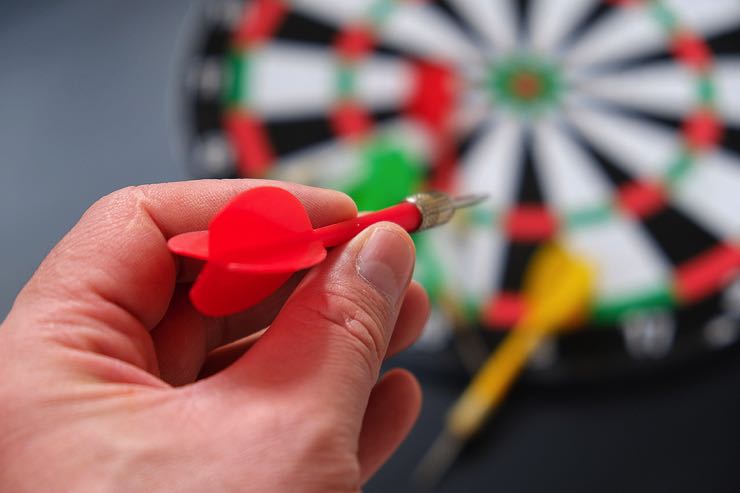 With more darts events than ever the bookies have introduced a good number of darts betting markets in recent years, from tournament betting to individual matches, there are many wagering options available.

Whilst darts is not the most physical of sports, anything can happen on the oche, so it’s worth noting a couple of betting rules lest you get caught out.

If for any reason (injury seems unlikely, but you never know!) a player is unable to complete a match, bets on that match will be voided. If a match is postponed but replayed within a certain amount of time (12 hours for some bookies) bets may stand, but check with the individual bookie to be sure. 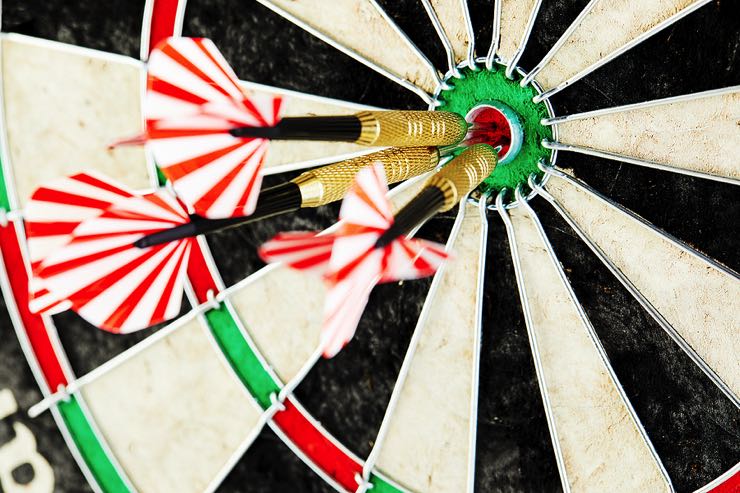 In recent years in the PDC side of the sport one of the most successful strategies has simply been to back Phil “The Power” Taylor for just about everything. But nowadays other players are coming to the fore and – particularly in the BDO tournaments – the winners are rarely dominant for long periods of time.

Darts can be a particularly good sport to indulge in a spot of in-play betting as even when a player goes into a big lead and looks to be throwing well there is a tendency for matches to swing the other way. When bookies shorten the odds on the player in the ascendency based on the score but not the balance of play, that is when to back the underdog. For instance if the losing player has had a number of unlucky bounceouts, or is looking the calmer of the two and has a reputation for dealing with pressure better).

Overall doing your research on the current form of players coming into a tournament will usually pay dividends. A former star who is fading up against a fearless rookie could be an opportunity to back the newcomer at big odds for the match and for the tournament outright, especially in the BDO code.

Professional darts in the UK is a very popular sport among fans and punters alike. After the controversial ‘split in darts’ in 1993 – when there was a dispute over the sport’s television coverage from the late 80s to early 90s – the World Darts Council (WDC), later to become the Professional Darts Corporation (PDC), was formed, breaking away from the British Darts Organisation (BDO).

To this day, the organisations have remained split, each holding their own major tournaments throughout the year. The BDO organises tournaments like the Winmau World Masters, the BDO World Trophy and the World Professional Championship, with the latter being their pinnacle. Meanwhile, the PDC holds several championship competitions such as the UK Open, World Grand Prix, World Matchplay and the famous PDC World Darts Championship.

There are rare times when players from both governing bodies compete in the same events, with the Grand Slam of Darts being the only ongoing tournament where that is the case. That’s organised by the PDC and despite being the newer body, it is the PDC world title that is the most prestigious event in darts. PDC events also generally boast significantly higher prize money and receive more media coverage.

The Winmau World Masters is the longest running BDO major tournament, starting way back in 1974. The competition was first staged in Fulham, and has since moved from Wembley to Earls Court and Kensington. Nowadays, the championship takes place at Lakeside Leisure Complex in Surrey. Winmau, which is a darts board manufacturer, has been the tournament’s sponsor for over 40 years.

The World Masters is one of three major BDO events, and it’s considered to be the second biggest behind the World Championship. As of 2017, in the 40+ year history of the Masters, only seven players have managed to win the title on more than one occasion. Eric Bristow holds the record for most tournament wins with five. Only 14 players have won the Masters and World title in their career.

The BDO World Trophy is the newest major darts tournament added to the British Darts Organisation’s calendar. The first event took place at Blackpool Tower in 2014, with James Wilson coming out on top. Since then, the championship has moved from Blackpool to Barry, via Manchester and Surrey.

As it’s a relatively new tournament, the World Trophy has yet to claim the hearts of all die-hard darts fans, but it’s certainly in the process of trying. Eurosport held the rights to broadcast the event in 2014 & 2015. After an issue with partner De:Luxe Sports Group, (TV channel) Dave ended up showing the 2016 event, while FrontRunner showed some of the 2017 event. The 2017 champions were Peter Machin and Aileen de Graaf.

The World Championship is without doubt the BDO’s biggest tournament, and it has taken place at Lakeside annually since 1986. The first version was held at the Heart of the Midlands Club in Nottingham in 1978, but moved the following year to the Jollees Cabaret Club in Stoke. There have been 24 different winners of the World Championship. Since the split, Raymond van Barneveld has lifted the trophy more than anyone, with five titles to his name. Van Barneveld is just one of many players to use BDO glory as a stepping stone to the PDC.

Over the years, the likes of BBC Sport, Channel 4, ESPN and BT Sport have all won the rights to broadcast the BDO World Championship. From 2017, Channel 4 signed a two-year deal to broadcast men’s and women’s matches from the tournament. Channel 4 showed afternoon games and the first semi-final, while BT Sport showed evening matches and the second semi. The 2017 final, meanwhile, was shown on both channels.

Whilst the BDO World Championship cannot rival its PDC equivalent for the standard of darts, it retains a unique charm and appeal. Moreover, with it generally being free to view, it often has a larger UK TV audience.

Moving onto the PDC’s events, the UK Open, which is currently sponsored by bookmaker Coral, is one of the most popular PDC competitions on the calendar. Over the years, the tournament has earned the nickname the ‘FA Cup of darts’, due to the different levels of experience of the participating players, and a random draw after each round. The UK Open was established in 2003, with Bolton Wanderers’ Reebok Stadium (now the Macron Stadium) hosting the event for 10 years. Since 2013, Butlin’s Minehead has been its new home.

At the time of writing, Phil Taylor has won more UK Open titles than any other player in history, having won five of the six finals he’s participated in. Taylor’s only defeat in the final came in 2012, when Robert Thornton beat him 11-5 in Bolton. The 2017 winner was Peter Wright, as he saw off Gerwyn Price 11-6, bagging £70,000 prize money in the process.

From 1994 to 2012, matches at this championship had to be won by two clear legs. However, since 2013, if a two-leg lead had not been established after six extra legs, then a sudden death scenario would come into play. Over the course of the competition’s 22-year existence, there have only been seven different winners.

The PDC World Darts Championship is the sport’s leading and most prestigious event on the calendar each year. In 2018, the prize fund will be a staggering £1,800,000, compared to BDO’s World Championship fund of just £300,000 (as of 2016). The tournament begins in December, ending in early January every year.

At present, Phil Taylor is once again the most successful player in this tournament, winning 14 of the 24 World Championship events. However, Taylor’s last win came in 2013, with Michael van Gerwen and Gary Anderson both winning twice each since Taylor’s last triumph. The PDC World Championship has taken place at Alexandra Palace every year since 2008, with Circus Tavern being its home from 1994 to 2007.

Between 1995 and 2006 Taylor won 11 out of 12 titles, a truly staggering achievement. Many in the darts world feel that the Stoke legend is under-appreciated outside the sport. One thing is for sure though, anyone who has bet on The Power over the years certainly WILL appreciate him!

The darts Premier League is unique in running over the course of much of the season, being a league, effectively, as opposed to a single tournament. It usually takes place between February and May each year.

Now featuring 10 of the best players in the world and with action every week, the Premier League is a popular event that travels the country. The exact format, including the number of players, has varied over the years. One thing that doesn’t vary is the name most frequently found on the trophy. Phil Taylor has won this one six times since the inaugural 2005 league.

Various other tournaments take place over the course of the season. The PDC also organises the likes of the World Grand Prix, the aforementioned Grand Slam of Darts, the Players Championship Finals and the European Championship. Several non-ranking events also take place each year.

As for the BDO, they have the International Darts League, World Darts Trophy and BDO Gold Cup. With so many tournaments and so many matches taking place over the course of the year, there’s plenty to bet on when it comes to the darts!