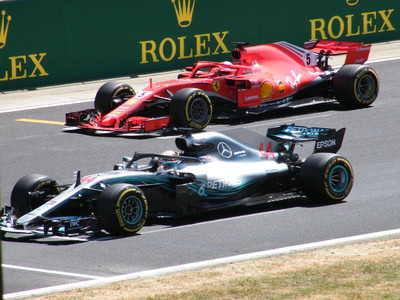 The Formula One season consists of a number of Grand Prix held at various circuits around the globe. Competing teams are known as constructors, with each constructor having two drivers per race. In each Grand Prix, drivers are awarded points based on their race finishing positions ranging from 25 points for a win down to 1 point for 10th position.

Whereas the Driver’s Championship title goes to the driver with the most points, there is also a Constructors Championship which tallies the points that both drivers have gained for their respective teams.

The Constructors Championship began in 1958, won by the British Vanwall team who had Stirling Moss and Tony Brooks driving for them. The most successful constructor is Ferrari who have won sixteen titles to date.

What Is The F1 Constructors’ Championship?

Formula 1 is the pinnacle of global motorsport and is the most glamorous, prestigious of the many and varied sports that fall under that umbrella. It offers two main prizes, rewarding the skill and brilliance of the individual drivers through the Drivers’ Championship, and the teamwork and technical excellence of the engineers and wider group of technicians through the Constructors’ Championship. We have a separate feature that details the organisation and structure of the Drivers’ Championship so here our focus is on the battle to be crowned Constructors’ world champions.

To learn more about the origins and structure of Formula 1 you should check out the piece we linked to above that covers the individual competition of the FIA World Drivers’ Championship. However, in order to explain more about the prize for constructors, we do need to understand a little about the way F1 works.

Drivers compete as part of a team, the rules of the sport dictating that each team has two drivers. Typically, though not always, one driver is the lead driver, with more of the team’s focus in terms of time and energy going on them. However, both drivers score points, both individually and for their team.

The winner of each Grand Prix earns 25 points, with that reducing down to one point for 10th place, with those 10 drivers eligible for an extra point if they record the fastest lap of the race. For the Constructors’ crown, the points earned by each team’s drivers are added together.

Usually, though not always, the driver that wins the Drivers’ world title will come from the team that wins the Constructors’, though this did not happen most recently in 2021. Mercedes won the Constructor’s Championship with 613.5 points thanks to their two drivers, Lewis Hamilton and Valtteri Bottas, finishing second and third respectively in the driver table. However, it was Red Bull’s Max Verstappen who famously pipped Hamilton to the world title in dramatic fashion

Whilst those that bet on the sport and those that simply love to watch it focus on the battle between individual drivers, in terms of finances and prestige within the sport the Constructors’ Championship is hugely important. Lewis Hamilton said towards the end of the 2021 season, “I’ve just realised we’re only one point ahead in the constructors’ championship and that’s the most important one, really.” The Brit added that this was because of the “funding you get for the development, for all the people who are working back at the factory.”

Some fans debate whether this is actually true, with many believing that whilst teams and drivers talk the talk when it comes to the Constructors’ title, in reality the individual award remains most prized. In truth, it is hard to be certain about this. However, we can be sure that the teams themselves certainly value the constructor award far more highly than either the media or the public do.

What Is A Constructor?

The exact meanings of the terms “team” and “constructor” in F1 have changed over the years and are often used interchangeably. The constructor is the body that designs and makes the engine and chassis of the car. In some instances, such as Ferrari and Mercedes, a single company is responsible for both. However, it is not uncommon for responsibilities to be split, giving us constructor names such as McLaren-Mercedes or Red Bull-Honda, the engine-maker always being the second-listed name.

Prior to 1981, the two aforementioned terms were more distinct because a team did not need to build their own chassis. A constructor could sell their chassis design to more than one team and the same is true of the engine manufacturers. In the modern era, the vast majority of constructors are based in the UK, most notably Mercedes, McLaren, Aston Martin, Williams and Red Bull.

As of the 2022 season, there are 10 constructors in Formula 1. Three of these use Ferrari engines, four use Mercedes, two Red Bull and one Renault. Over the years there have been many others too, with the boundaries blurred somewhat by the changing rules regards who can make which part of the cars.

The Constructors’ Championship did not become a formal competition until 1958 and now-little-known Vanwall were victorious in that inaugural campaign. They ceased working in F1 many years ago but most of the leading constructors throughout the sport’s history are household names in motoring.

However we construe the word “constructor”, it is the prancing horse of Ferrari that comes out on top. The Italian behemoth is synonymous with speed, excitement and luxury and they have been involved in Formula 1 since the first season in 1950. They have always been a team that makes both engines and chassis and with 16 titles they lead the way in both of those fields. 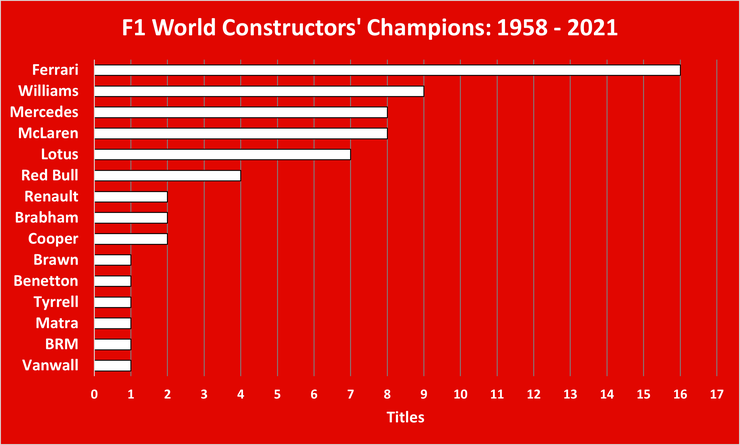 If we are considering companies who have made the chassis for F1 cars then Williams come next with nine titles, with McLaren and Mercedes each having eight. Lotus have seven Constructors’ Championships to their name, won in the 1960s and 1970s, with new kids on the block Red Bull next with four.

If we look instead at engine producers, as said, Ferrari reign supreme with their 16 titles, the last of those won in 2008. It is Renault who are their nearest challengers in this battle though, with 12, all won since 1992. Ford, who last built a title-winning engine back in 1981, are tied with Mercedes on 10 Constructors’ world crowns, though the Silver Arrows’ titles have all come since 1998, including eight in a row since 2014. 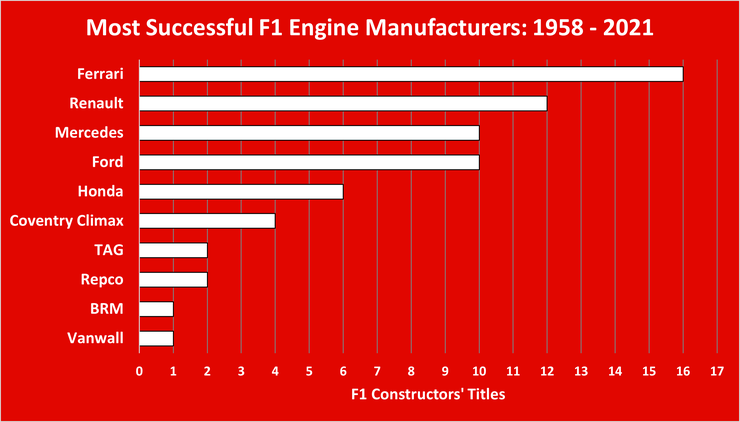 F1 is very much a sport of the wealthy and any new team looking to try and challenge the likes of giants such as Mercedes and Ferrari will certainly need deep pockets. Exact budgets are undisclosed but simply to enter a new team requires a £25m payment to the FIA. It is believed the biggest and best-funded teams spend not far shy of $500m a year, with anything less than $100m unlikely to go too far.