The Formula One World Championship is a motor racing series which takes place each year, having been created in 1950.

Each Grand Prix, drivers are given points based on their race finishing positions, currently this is 25 points for a victory, 18 points for second place, 16 points for third place, reducing incrementally to tenth position which receives 1 point. At the end of the season the driver with the most points in the Drivers’ Championship is named the Formula One World Champion.

Britain’s Lewis Hamilton and Germany’s Michael Schumacher jointly hold the record for most Drivers Championships with seven titles each.

Formula 1 is the most glamorous and prestigious motorsport in the world and the Drivers’ Championship is the main prize the competitors are aiming for. Here we explain how it works, a little about the history of the title and take a look at which drivers have been the most successful over the years.

Italian driver Giuseppe Farina was crowned the first world champion after a season that included six Grands Prix in Europe and the Indianapolis 500 in the USA. The name of the championship and its structure have changed many times over the years but the Formula 1 Drivers’ Championship in a form we would recognise today really all began with Farina’s title.

F1 is the pinnacle of what is technically single-seater, open-wheel (meaning the wheels sit “outside” the body of the car) racing. It is governed by the Fédération Internationale de l’Automobile (FIA), a body formed in 1904 that also looks after the World Rally Championship and a number of other prominent motorsports.

Technically known as the FIA Formula 1 World Championship, there are two key titles on the line. One for drivers, which is our focus here, and another for the teams, the Constructors’ Championship, which we look at in a separate article.

To top the Driver Standings, an F1 pilot, as they are sometimes referred to, must simply accrue the most points over the course of the season. In 1950 the first world champion registered 30 points, in 1985 Alain Prost was victorious with 73 and 35 years after that, in 2020, Lewis Hamilton amassed a massive 347!

These huge differences are explained by the fact that the number of races in a season has changed a great deal and also by the fact that the points system within each race has changed. In 1950 there were just seven races (though only six really), with eight points awarded for winning, then six, four, three and two, for second to fifth respectively and a point available for the fastest lap. In addition, only a driver’s best four finishes counted, with variations on this system persisting until 1990, when it was decreed that all races would count.

As of the 2022 Formula 1 season, there are 23 races, beginning in Bahrain in March, spanning Asia, Australia, the USA, Europe and South America (Brazil), before ending back in the Middle East with the finale in Abu Dhabi in November. The race winner earns 25 points, going down to 18 for second place, 15 for third, then 12, 10, 8, 6, 4, 2 and a single point for 10th place. In addition, there is a point awarded to the driver recording the fastest lap, though they must also finish in the top 10 to be eligible for that bonus. 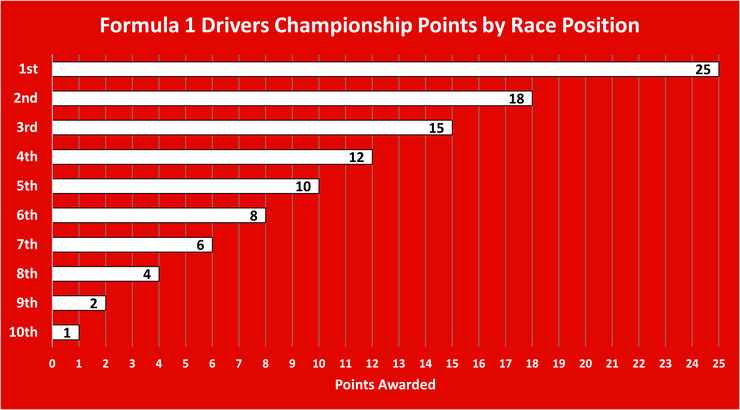 There are various rules for points in incomplete races, as well as the fact that a driver needs only complete 90% of the race in order to be eligible for points. All the points from each of the 23 races are added up and whoever scores the most over the course of the F1 season will top the Driver Standings and thus be declared the winner of the Drivers’ Championship and F1 world champion.

As in any sport, the debate rages in Formula 1 about who is the greatest driver of all time. Comparing sports stars from different generations is always fiendishly difficult and this is certainly the case in F1. The technology in modern cars would be unrecognisable to stars of the past and critics of the sport say that the car is far more important than the driver in the modern era.

In addition, huge advances in safety have dramatically cut the number of deaths and serious injuries we see, so modern drivers do not need to possess quite the same levels of bravery (or perhaps madness) as their counterparts from the past did. Thankfully driver deaths are very rare now, whereas in the 1950s, 1960s and 1970s they were regular occurrences.

That said, the Drivers’ Championship and individual race wins give us a really obvious starting point for any assessment of F1’s best drivers of all time. The chart below shows the most successful drivers the sport has seen, though it should be remembered that, as we have said, the number of races each season has increased over the years.

We should point out that even though four other drivers have also won three Drivers’ Championships but the incomparable Senna earns a special mention for the aesthetic brilliance and sheer aggression of his driving. As with any stats, looking solely at the number of titles won can only ever paint part of the picture. We can also look at the total number of races won as shown below. 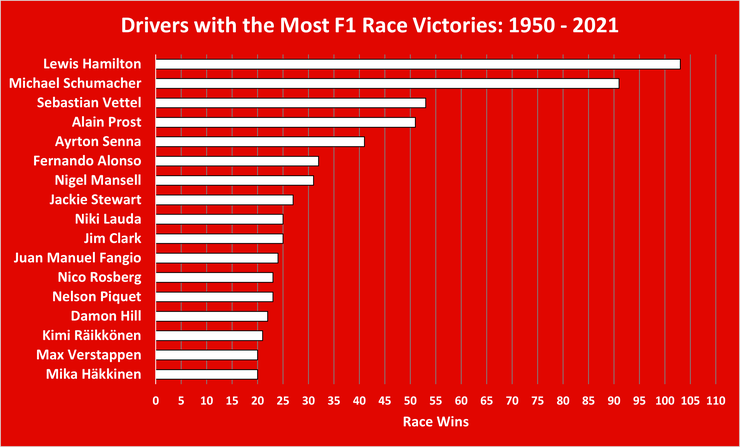 Whilst Hamilton leads the way (at least jointly) on all metrics, it should be noted that his 103 wins and pole positions have come from 291 races. That is a 35% strike rate, whereas Senna secured pole in more than 40% of his races and Fangio in almost 56%, the latter winning over 46% too.

Moreover, whilst Hamilton may well lead the way, some might point out that he was lucky enough to have an incredible car to drive for many of those wins, one that was far superior to that of his rivals. Nelson Piquet, a compatriot and contemporary of Senna, like the more famous driver, also won three drivers’ world championships. However, two of those came when he was driving in a team that did not win the Constructors’ Championship. In contrast, only one of Hamilton’s seven came when it could reasonably be argued that he perhaps did not have the best car.

There are claims and counterclaims, and stats that “prove” one thing, whilst other figures can be used to support something else. Leaving such debates to one side, nobody can question that any driver to have won a world title is truly a great and certainly all of the multiple Drivers’ Championship victors we have discussed are genuine legends of Formula 1.