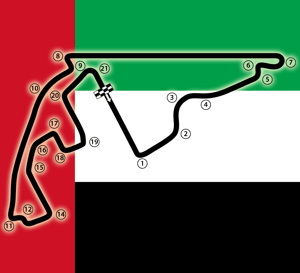 The Abu Dhabi Grand Prix has been part of the Formula One Calendar since 2009. This race was the last of the season in its first two years and has been the concluding event every season since 2014, taking over from the Brazilian Grand Prix.

The race is held at the Yas Marina Circuit which is on the southern peninsula of the $40 billion Yas Island leisure complex in the United Arab Emirates.

The Abu Dhabi Grand Prix was the first day-night race in F1 and uses floodlights as the race progresses to illuminate the track.

Lewis Hamilton is the race’s most successful driver, winning once for Maclaren in 2011 and four times for Mercedes between 2014 and 2019. 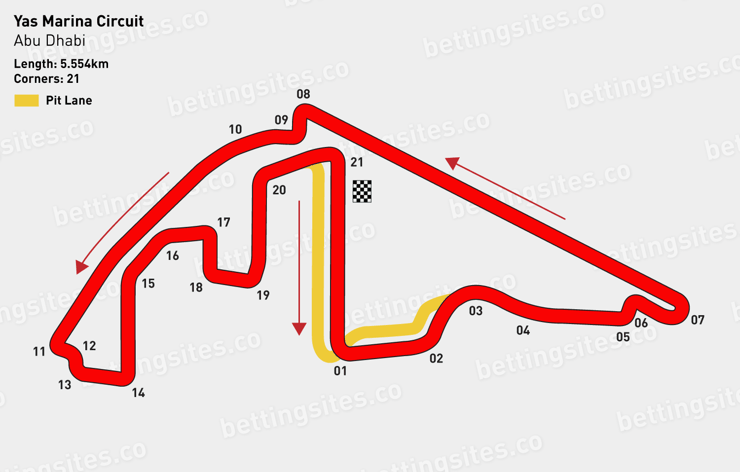 The Yas Marina track packs in 21 turns into its 5.5 km circuit, giving a multitude of overtaking opportunities across the 55 laps. The race runs alongside the marina between turns 11 and 20, with high speed sections between turns 7 and 11, separated by a chicane overlooked by the West Grandstand.

About the Abu Dhabi Grand Prix 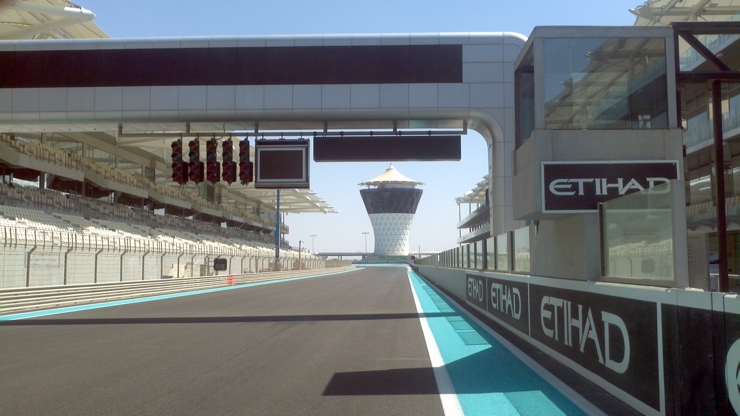 As the final race of the year, the Abu Dhabi Grand Prix is easily one of the most anticipated and celebrated events on the F1 calendar. The race has been running in its current form since 2009 and with it thousands of people flock to the Yas Marina track from around the world.

The track broke ground in 2007 and took a little over 2 years to fully complete. As part of the design, it was decided that the it would around the Marina on Yas Island, which offers a stunning, yet unique backdrop. It’s essentially one of the richest races in the world and with it, the track has been formed to be able to show off the money that has been invested, which is thought to be around $1.32 billion. 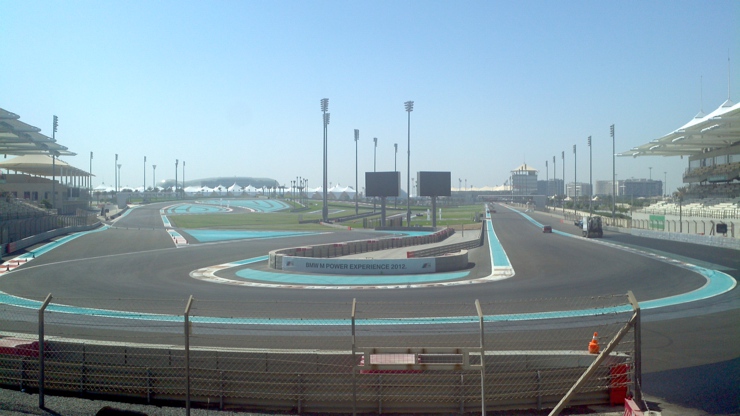 The average lap speed is around 193kmph, just below the season average. There are 21 turns on the course, which sees very little in the terms of elevation changes, but several demanding braking areas and two possible overtaking zones into turn 8 and 11.

Cars cross the start finish line at around 265kmph, before hitting the first corner at speeds of around 290kmp. The first corner is a tight left-handed hairpin, which drivers need to navigate before coming ingot a sweeping left hander that is taken around 240kmph, one of the fastest on the circuit.

Turn three sees the drivers take a fast right hander before heading into a fast left hander, each at pretty much full tilt seeing cars reach around 270kmph before hitting the back straight and into the a tight ‘S’ Bend. The ‘S’ bend is one of the slowest sections on track and with it sees the cars go down to as little as 80kmph.

Next up the drivers have to slowly go through another of the hairpin turns on track, again very slowly at speeds of just 65kjmph before hitting a long straight that also works as the DRS zone and a popular passing zone. This is where cars generally max out with their speed, hitting up to 335kmph, before breaking hard from 8thgear into just 2ndgear and speeds of around 70kmph.

The chicanes are next to navigate and with it see high kerbs meaning that drivers can’t necessarily cut off as much as they normally would. The drivers then head back up towards one of the main grandstands again hitting high speeds, before breaking hard and then into a tight left hander and then tight right hander. This is another section that drivers are able to pass and often where you see cars getting the most out of shape as it’s a very technical section.

The chase towards the finish line is on and they take a sweeping right hander at almost full speed before then two more right handers, before heading past the back side of the main grandstand. The cars then are needed to go through two slow left-handed turns, before making their way down to the last corner, which is a right-handed chicane and back up towards the finish line. 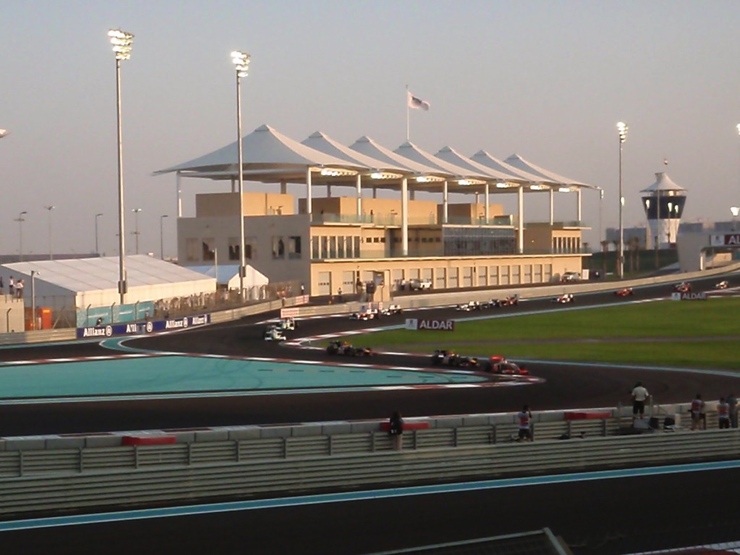 As stated the circuit was broken ground in 2007 and it first opened in 2009. It was a highly anticipated opening, especially given the money involved. But, the work started and then completed just before the economic crash and it was unsure as to how the track would compete given that money would be tight.

The work was carried out by that of Hani Rashid and Lise Anne Coutoure, who work as part of a New York Architect. It was actually a much-criticised appointment, given that many tracks worked with the likes of Hermann Tilke, but the management committee decided that a fresh approach was needed in terms of the design of the track and thus they decided to go against the grain, an choice that in hindsight seems to have paid off them. Interestingly, in 2017, it was announced that Hermann Tilke would be leading some changes on track in order to increase the number of overtakes and in turn, excitement around the race.

The circuit was created with a full lighting system, which meant that night races were able to take place and whilst qualifying is held through the day, the track does run as a night-race for the race itself.

Whilst the Abu Dhabi Grand Prix had already hosted its first race, the 2009 was a bit of a dead rubber. It was a year later when the last Grand Prix of the season was called into action in order to decide the championship, and it did so in dramatic fashion.

Fernando Alonso ultimately lost out to that of Sebastian Vettel, who won his first Drivers Championship in the process. It was Vettel’s second victory at the track after winning their 12 months earlier.

In an attempt to reignite the excitement into F1 and to prevent drivers from running away with the Championship, it was decided that for the last race it will be run as a double points race. It was a process that many didn’t really like and it turned out to be the only year that it was used.

The race did mean that the Championship could still go either way through and with it both Nico Rosberg and Lewis Hamilton went into the final race with just 17 points separating them. It was Rosberg who would struggle in the race though and with it see his chances of winning the title diminish, eventually finishing in 12thplace. Hamilton went on to win and in turn, lifted the Drivers’ World Championship for the second time.

The F1 Drivers Championship couldn’t have been closer going into the 22nd and final race of the 2021 season in Abu Dhabi. Mercedes’ Lewis Hamilton and Red Bull’s Max Verstappen were tied on 369.5 points, meaning whoever finished the race in the highest position would secure the title.

Verstappen secured pole position but was overtaken at the start of the race by Hamilton who took the lead into the first corner. Hamilton managed to build up a 12.1 second lead and looked to be on course to secure an historic eighth world championship but, with just five laps to go, a crash for the Williams of Nicholas Latifi would throw the race up in the air.

The safety car was deployed with Red Bull using this as an opportunity to change tires, Hamilton stayed out on track. Verstappen rejoined in second place but with five lapped cars between himself and Lewis Hamilton in the lead. Controversially, with one lap remaining, the safety car ended with the lapped cars allowed to pass, meaning a straight shootout for the title. With the fresher tyres, Verstappen was able to pass Hamilton at the fifth turn and held off his rival to become Formula One World Champion for the first time.