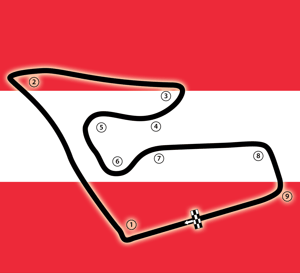 The Austrian Grand Prix has been a fixture in Formula 1 on and off since 1964. It returned to the schedule in 2014 having been dropped after the 2003 season.

Since 1970, the Austrian Grand Prix has taken place at the Osterreichring, located in a town called Spielberg in the Styrian region of the country, around 60km north-west of Graz. Since 2011 the Osterreichring has been known as the Red Bull Ring, with the energy drink company purchasing the track in 2003. Red Bull’s co-founder Dietrich Mateschitz was born in the area.

Some of the sport’s greats have won multiple F1 races on this track, including Alain Prost, Mika Hakkinen and Michael Schumacher.

In 2020 and 2021 Austria hosted two races back-to-back, the official Austrian Grand Prix and a second known as the Styrian Grand Prix. 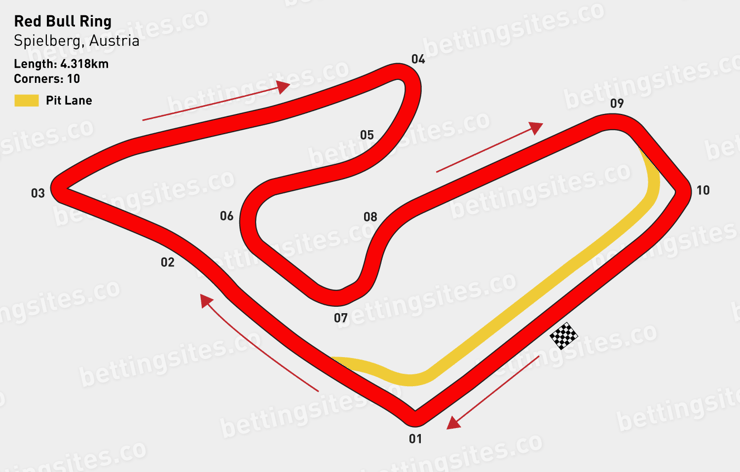 Austria's Red Bull Ring is a relatively compact circuit covering a distance of just over 4.3 km. There are 10 turns in total with the pit lane entering after turn 9 and exiting after turn 1. More info...

About the Austrian Grand Prix 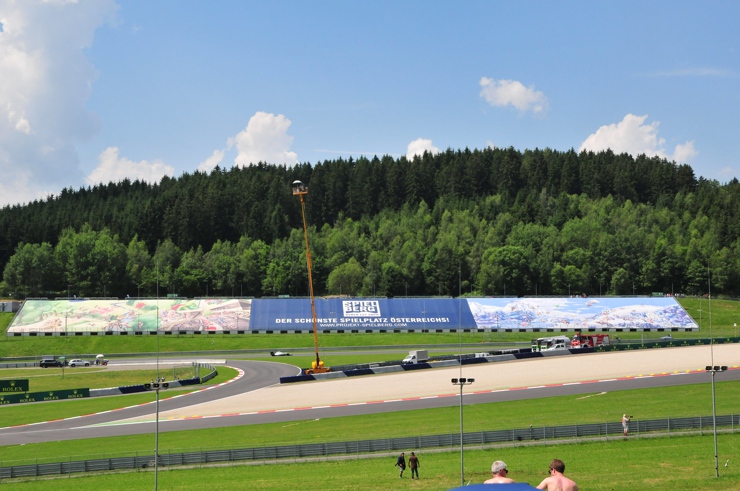 There are few Grand Prix’s that have a more spectacular backdrop than the Austrian, as it’s surrounded by the lush hills and forest of the Austrian countryside. The track is one of the more popular ones on the circuit and whilst small, possess a number of tricky corners for the drivers to navigate through.

The track is currently known as the Red Bull Ring, who were able to revive the track from what was a number of financial issues from the previous owners. It’s previous name of the Osterreichring is one that is still referred to and whilst it has hosted many F1 Grand Prix’s, it hasn’t always been a firm fixture. 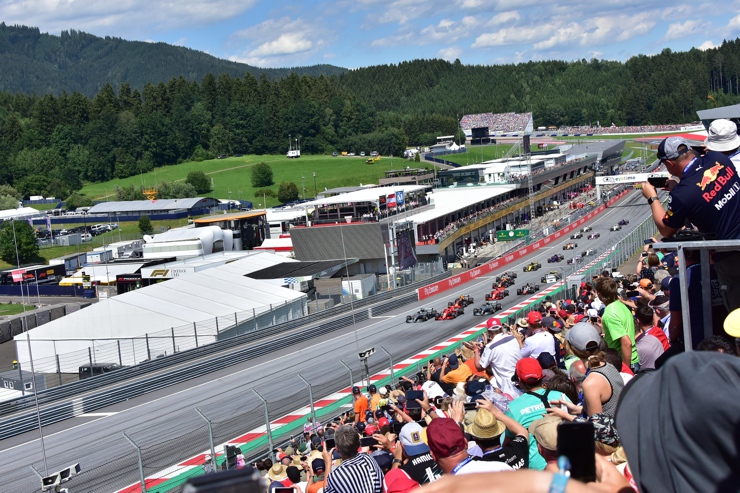 The lush green hills of Spielberg play host to the track and fans flock to see cars racing flat out in what is arguably the most breath taking natural backdrop that both drivers and fans will see all season.

The 4.3km track has one of the biggest elevation changes as well, with it rising 63.5 meters in total, meaning that drivers have an added issue to contend with in the form of this. The track only includes 9 corners, which is the fewest in the calendar and includes 2 DRS zones that encourage overtaking due to the high speeds and steep breaking zones that are on offer.

The winding corners and long straight test the drivers reflex to the absolute maximum, and whilst short drivers often say that over the course of the race, it’s highly draining for this exact reason.

The drivers come across the start finish line and see a big elevation rise up to turn 1. The elevation change is something that is often hard for the drivers to grasp as it means they are actually able to break a little later than they would if the track was flat. It allows them to shorten the zone quite considerably, but often drivers will get caught out.

As the work hard to maintain traction early in the race, the drivers then swing through and back down as the driver’s head down one of the main straights of the racetrack and into turn 2. As one of the fastest parts of the track, the drivers see well over 5G worth of force applied and the drivers squat down into a tight apex.

The run down to turn three sees cars pick up great speed again, but the breaking zone is another one that is tough to judge for the drivers as it’s descending back down the hill, meaning they need to break a little earlier than they would on the flat. The corner is a short apex, one which means that drivers spend a lot of time struggling for traction on the outside of the corner and really fighting with the car as a result.

The drivers then go through a small kink, which is classed as turn 4, although no issues for the drivers as the take it flat out. They then come to the 2 main corners on the racetrack, with turn 5 seeing them fighting for grip and traction. They then drop down into turn 6, a slightly faster corner than turn 5 and through turn 7.

This section of the track sees a huge amount of speed and momentum carried and into the blind brow of turn 8. This is another area that catches a lot of drivers out, often running wide and losing valuable time at the end of the run.

The final corner, turn 9, sees another tight apex before drivers try and use as much as the track as possible on the exit kerb, often fighting for grip at the same time. The run down across the start/finish line sees another of the DRS zones and across the line to complete the short, but highly exciting circuit. 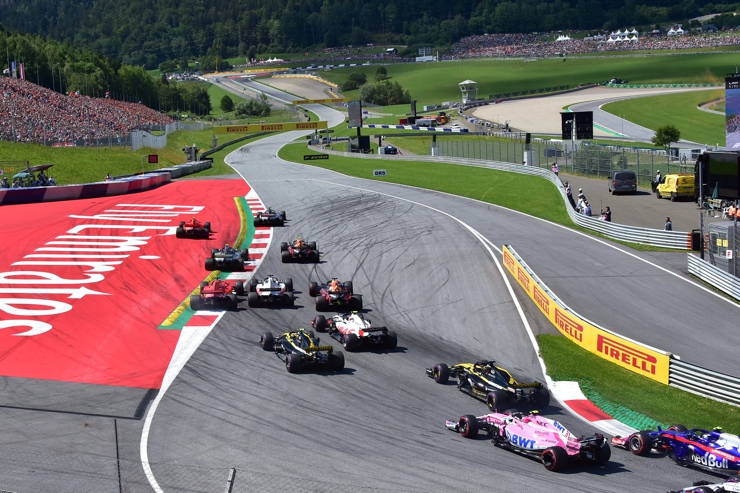 The original formation of the Osterreichring in 1969 was one of the fastest and most exciting in Europe at the time. It meant that drivers had to drop no lower than 3rdgear from a 5-speed gearbox that were used at the time, with speed being a priority.

But, the track aged quite badly and simply wasn’t able to hold up to the speeds and the demands of the modern race car, with many labelling it unsafe. It closed its doors between 2003 and 2011, when Red bull came in and made the necessary changes it needed to function as a racetrack again.

The grandstands and pit lanes were fully demolished and new building installed to replace them, making them much more desirable to the now multi-billion-dollar business that was Formula 1. It took until 2014 to see a return to F1 racing and since then has been a popular and firm fixture on the Grand Prix calendar.

The battle between Niki Lauder and Alain Prost was at its peak in 1984, with the pair going head to head once again in Austria. The pair would qualify on the first two rows of the grid, but it was Lauder who was to get the better of the race and eventually win, with Prost eventually returning after spinning off in his chase of Lauder.

The race was very much thought to be a turning point in the season, with Lauder then going on to finish no worse than 4thin the final 4 races of the season to win the Drivers’ Championship by just 0.5 points.

The 2016 race at Austria was one of the most dramatic. It was Lewis Hamilton who came into the race in pole position, finishing ahead of team mate Nico Rosberg. Rosberg had a 24-point advantage over Hamilton in the Championship, after a poor start from the Brit, but after the pair collided on the final lap, Hamilton would go on to win the race, with Rosberg finishing in 4thspot, cutting the lead to just 11 points.

But, it would be Rosberg that would have the last laugh, as he managed to win the Drivers Championship by just 5 points, going down to the final race of the season in Abu Dhabi.