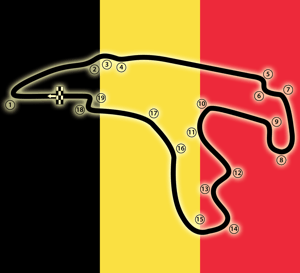 The Belgian Grand Prix is held at Spa, or Circuit de Spa-Francorchamps to give the track its full name. The circuit itself lies just to the south of the village of Francorchamps, around 20 km from the the town of Spa.

The first Belgian Grand Prix was held back in 1925 and it was the fifth race in the very first F1 season in 1950, won by the legendary Juan Manuel Fangio in his Alpha Romeo.

Spa is one of the most popular racetracks with both drivers and fans alike. The famous Eau Rouge/Raidillon section is one of the circuit’s highlights, seeing the track rise 40m from La Source hairpin after the home straight to a blind summit.

Ferrari have a particular affinity with Spa, winning here more than any other constructor. Multiple winning drivers include Michael Schumacher and Ayrton Senna as well a Brits, Jim Clark, Damon Hill and Lewis Hamilton. 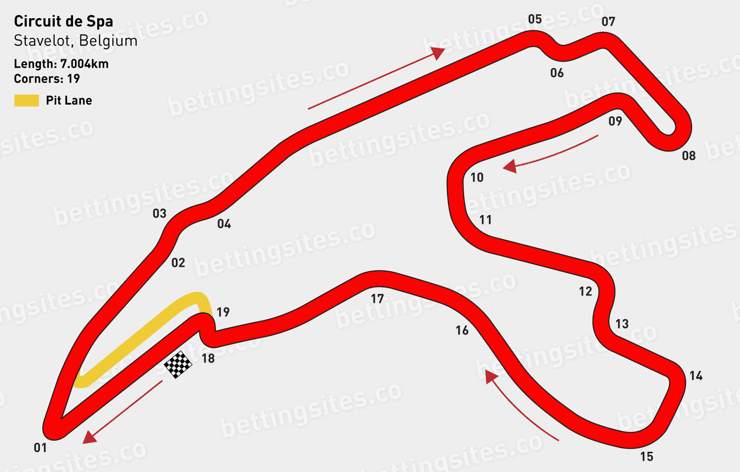 The circuit at Spa is a considerable 7km in length, meaning the 308km F1 races are completed in just 44 laps. There are 19 corners in total with the left-right-left sequence between turns 2, 3 and 4 famously known as Eau Rouge. More info...

*Race abandoned after 3 laps due to heavy rain

About the Belgian Grand Prix 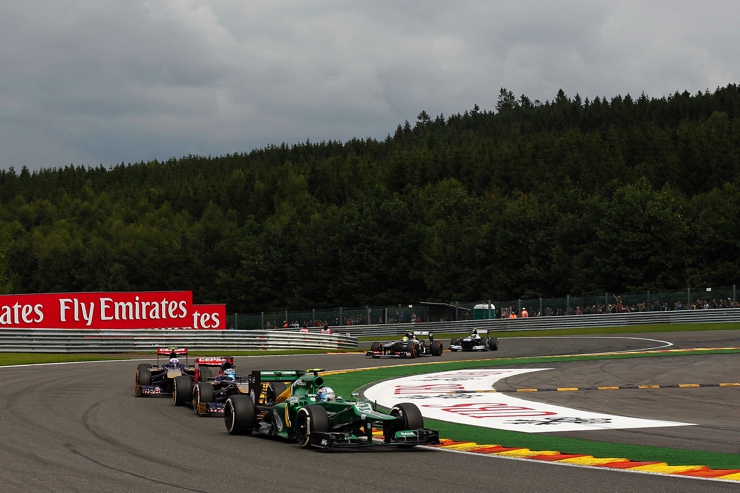 There are few more iconic and well-known racetracks in the world than Spa, situated in Stavelot, Belgium. The track is the longest on the F1 calendar and is often thought to be a brutal test for both drivers and cars.

It’s been about in some form since 1920 and was originally developed as a speed course, with many of those original features still on show today. Over the years, as the cars have developed, the track has had to be modified as it’s claimed many lives in the years it’s been open. 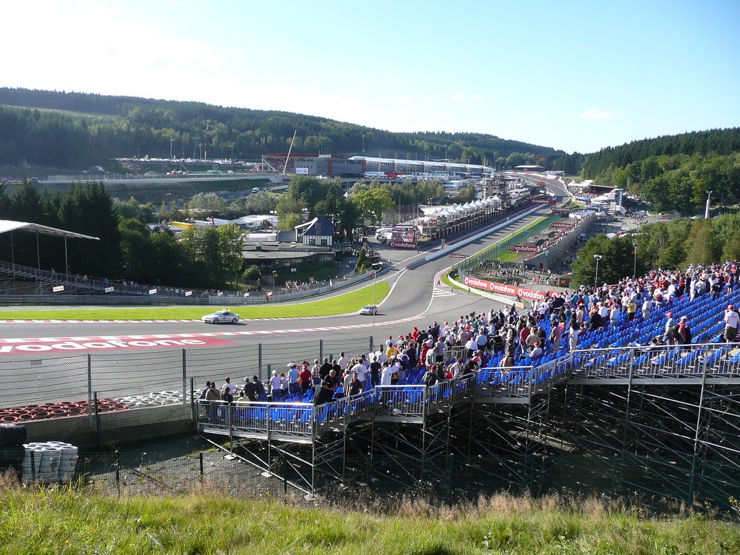 The track is often referred to as the “spiritual home of F1” and is held right in the middle of the circuit and as part of the European swing of races. At just over 7km it remains the longest circuit of the season, including long straights and fast, sweeping corners, coupled with its picturesque setting, mean that many regard it as the greatest racetrack in the world.

The changeable weather and big elevation changes of over 100m, along with legendary corners such as Eau Rouge and Blanchimont maintain its reputation as one of Formula 1’s most demanding challenges. The track is very much a part of the old-school and that’s how it’s set up to be. Fans from all over the world travel to the track to see a possible piece of history in the marking.

The run into turn 1 is very short, in fact, it’s one of the shortest in the calendar. The turn isn’t all that tight, but at the start of the race will offer some room for overtaking and can be utilised later in the race as well.

They then head down the bank as the car rapidly accelerates due to the elevation change and into the first of the iconic corners; Eau Rouge. The drivers need to take a deep breath – literally- as the compression from the elevation change is heavy at the base of the hill then very light as it comes up over the top, almost as it were to take off.

The cars then come up to the top straight and it’s not uncommon for cars to be hitting over 340kmph as they approach the chicane section. Turn 5 is very open and has a relatively short breaking zone. The cars are then flung straight into turn 6 which pulls the car across to the kerb and then going through turn 7 pretty much flat out, using the whole apex and the kerb on the apex.

The cars start to the steep decent again through turn 8, which is a sweeping hairpin. The driver must clip the kerb early before positioning the car into the middle of the road and gaining the correct approach for turn 9.

Turns 10 and 11 are probably the most iconic on the race track. Drivers are pretty much flat out between the two sweeping left handers, reaching speeds of 280 kmph in each, barely lifting between the two and using as much kerb as they dare to get a better racing line.

The run to turn 12 allows the drivers to take a quick breather after the almost 5G that is created in the previous two turns. Speeds decrease to around 180 kmph and sees a short run out through turn 13. They then approach Turn 14 and what is regarded as the end of sector 2. This is a point of reference for the driver to signify if they are on a good lap or not.

The drivers are then flat out through turn 15 and onto the back straight. It’s one of the most secluded parts of the racetrack with stunning views of the surrounding forest and very few spectators. It’s the fastest part of the track as well as cars are flat out through this section and through the kink at Blanchimont.

The driver then comes up to the relatively new chicane. A good line and run in here is vital to get good traction through the last turn and then back through the finish line. Drivers are required to have both great skill and bravery, especially in the back straight section where only the bravest will be able to keep their foot to floor and gain vital time over their opponents. 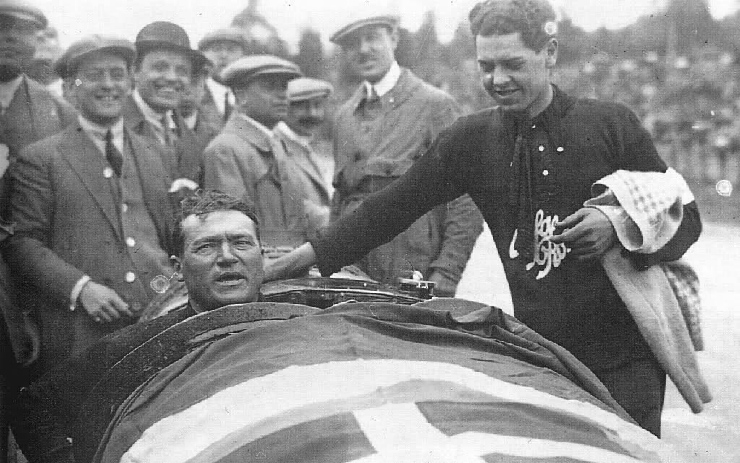 The track has changed considerably over the years since it first opened in 1920. But, the characteristics haven’t changed. Form what was once a fast, sweeping tracking is very much what you see today, although with added corners and safety measures to ensure driver safety is a priority.

Kimi Raikkonen will always be regarded as one of the best around the Spa circuit. From 2004 through to 2009 (race wasn’t run in 2006) he won an incredible 4 times from 5 races. The one race he failed to win was in 2008 when he crashed after just 4 laps after having managed to jump from 4thposition on the grid to second in his Ferrari.

The 1998 Belgium Grand Prix at Spa is one of the most iconic in the sports history. The race was eventually won by that of Damon hill, fending off Ralf Schumacher, his team mate by little under 1 second. But, it was what happened at the start of the race that everyone remembers.

On the first lap, David Coulthard lost control of his McLaren which caused a huge crash that involved 13 cars in total. 8 of those cars would retire after not even completing 1 lap and the race only had 8 cars finish the race, ironically, with 1 of those being that of Coulthard’s that has caused so much destruction at the start…. albeit 5 laps down on the winner!