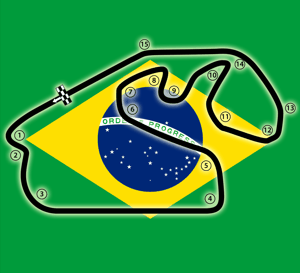 The Brazilian Grand Prix is held at Interlagos, or Autodromo Jose Carlos Pace to give the track its official title. Interlagos is located between the Guarapiranga and Billings reservoirs in a suburb to the south of central Sao Paolo.

Jose Carlos Pace was a racing driver from Sao Paolo who competed in 73 F1 Grand Prix, His sole Formula One race victory came in 1975 at Interlagos driving a Brabham Ford Cosworth for Martini Racing. Pace lost his life in 1977 in an aircraft accident with the track renamed in his honour thereafter.

The Brazilian Grand Prix has been ever present since the inaugural race in 1973, won by local legend Emerson Fittipaldi who was a two-time Formula One World Champion.

Alain Prost holds the record for most victories in Brazil with five, four with McLaren and a further win with Ferrari.

Lewis Hamilton has three wins in Brazil in 2016, 2018 and 2021 but his most famous race here was arguably in 2008. That season Brazil hosted the final race of the season, with Hamilton needing to finish fifth to secure his maiden World Championship. He did so but only took fifth from Timo Glock with three corners to go, to snatch the title from race winner Felipe Massa. 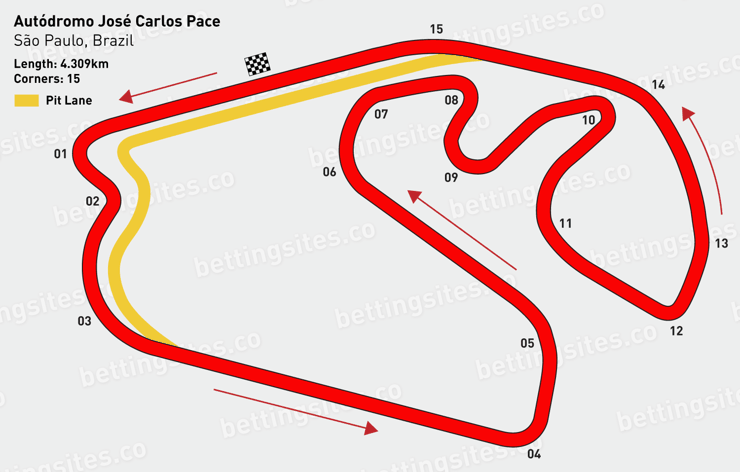 Interlagos has a full circuit of 4.3km. Each lap begins with the famous Senna S between turns 1 and 2 and finishes with a high speed sweeping uphill section turning into the home straight. The race distance is 71 laps and 305km. More info...

About the Brazilian Grand Prix 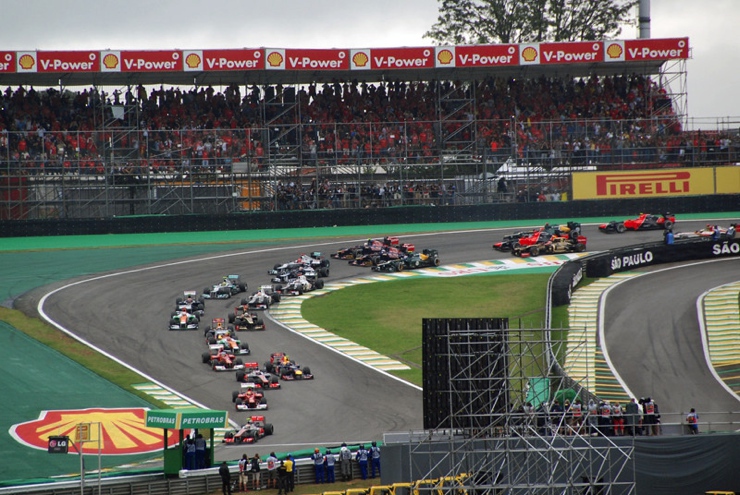 Few F1 circuits have seen the drama that Interlagos has been able to serve up over the years. The track has been famed for both starting and finishing the F1 calendar year at certain points, so it really has seen it all.

It’s been about since 1940 and in that time has seen the Grand Prix split between that if Interlagos and Jacarepagua. But, it’s been run at Interlagos since 1990 and has been one of the few stable fixtures in the calendar over the past few decades. 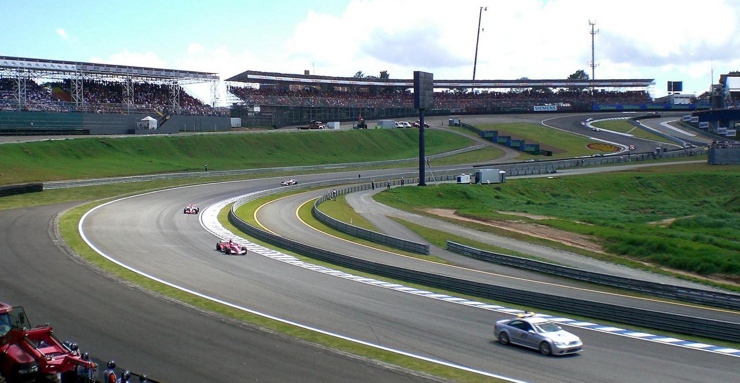 The track at Interlagos is famed for being at high altitude. This not only makes it tough for drivers as the air is very thin, but also for the cars as the way in which the air reacts to the car is very different from what they have to deal with at most tracks. The word ‘Interlagos’ means between the lakes, is located 16 km south of Sao Paulo in Brazil.

The 15 corner track, high altitude and a special carnival atmosphere that greets the drivers make it one of the most popular spots on tour. The track has a number of elevation changes throughout, with up to 43m in places. Even though there has been no Brazilian World Champion since Ayrton Senna, the local’s love for the sport and passion make it as popular as ever.

The cars cross the start finish line and head into turn 1 at speeds I excess of 340kph. The turn is tricky to navigate as it heads downwards, almost making it blind. It then drops immediately into the ‘Senna S’ and cars often struggle with oversteer as the track is very uneven, meaning that they also need to feather the throttle before fully getting back on it, making sure the back end is in place and traction is full.

The cars are absolutely flat through turn 3 and into the first DRS zone. This straight gives drivers the opportunity to check the system and make any adjustments that they may need for the upcoming sections of the racetrack.

Turn 4 is another high speed corner with a short apex as drivers are required to simply kiss the kerb and use as much as the track as possible into turn 5. Again, this is another part of the track where the “rollercoaster” feel to the race takes shape as they bob up and down on the straight into turn 6.

Turn 6 and 7 are again more fast corners that sweep throughout the track. Cars are almost at full throttle again, although it will depend on tyre wear here, as is an ongoing issue throughout the race. Cars then need to break hard before turn 8 requiring great accuracy as the cars immediately drop into to the next hairpin.

Turn 10 is another long apex corner that requires the driver to use the lateral load to move the car across the tarmac and ensuring that the correct lines are taken for the following corner.

The car then sweeps through turn 11 before it starts its accent back up towards the finish line. The driver simply needs to choose his line that will give him least resistance in making their move up towards the start. This may including clipping an apex, but such is the beauty of this part of the track, there are a number of lines that they are able to take.

Cutting past the pit lane entry, the cars enter another DRS zone and with it are full throttle across the line at the end of the race. The track often rewards the brave and the winner is usually the driver who is able to get the most grip throughout the mid to late section of the track, taking advantage of the fast, sweeping bends and being able to fend off any challengers that mat be pursuing. 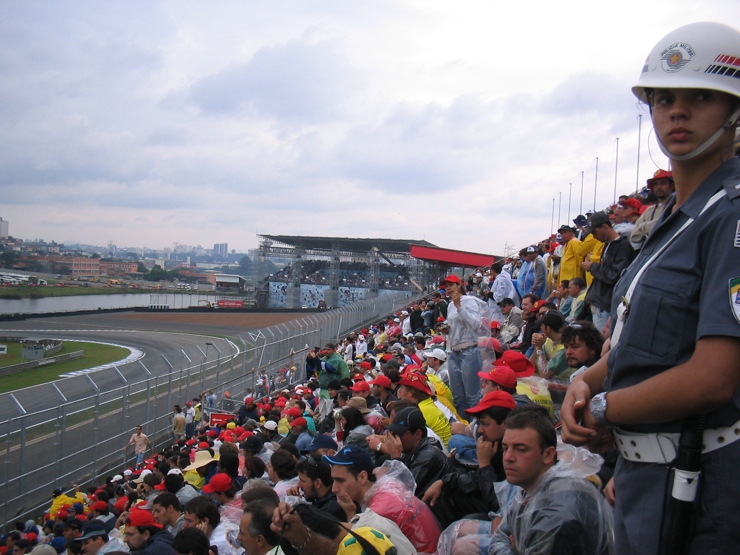 The land for the track was originally purchased in 1926 and the plans were set out to build accommodation and housing on the plot. The stock market crash of 1929 meant that these plans were put on hold before it was eventually decided that a racetrack would be built instead.

Work on the track didn’t start until 1928 and it took two years before it was officially opening in 1940, prompting the love affair that the Brazilians have motor racing. Formula 1 didn’t start there until 1972 when at the time it was raced as a non-Championship race. The first World Championship race was held just 12 months later in 1973.

2009 was an iconic moment not just for Jenson Button, but also Brawn. The outfit were the first to win in tehri maiden season since Mercedes-Benz almost 50 years prior to that. Button, in finishing 5th, did just enough to become World Champion for the first time sparking huge celebrations and singing down the intercom after crossing the line.

In 1991 finally managed to win his home Grand Prix for the first time, defeating Riccardo Patrese by almost 3 seconds. He became the first Brazilian winner of the race in 1986. Senna was so exhausted after the race that he had to be helped out of his car, even having to get someone to remove his hands from the steering wheel.

The 2008 grand Prix might just go down as one of the most fascinating races of all time. Hamilton came into the race on 94 points, with Massa on 87 points (10 points for a win) knowing that 5th or better would secure the championship.

Massa ended up winning the race and with Hamilton lagging in 6th place with just a few corners left, sparking wild celebrations in the Ferrari garage. But, Hamilton managed to pass Timo Glock in the last corner to come over the line in 5th and Ferrari’s elation turned to despair with incredible scenes within Hamilton’s camp.