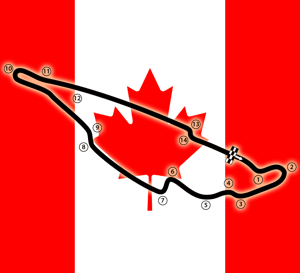 The Canadian Grand Prix is held each year at the Circuit Gilles Villeneuve in the city of Montreal, Quebec. The track is constructed on the man-made Notre-Dame island on the St Lawrence River which runs through Montreal.

The circuit is named in honour of the late Canadian driver Gilles Villeneuve who won the first F1 Grand Prix at the Montreal track in 1979 with his Ferrari. Villeneuve tragically lost his life in an accident during qualifying for the 1982 Belgian Grand Prix.

In 2019 Lewis Hamilton joined Michael Schumacher as the Canadian Grand Prix’s most successful driver with seven victories each. Schumacher had six wins in just eight years between 1997 and 2004 when driving for Ferrari. 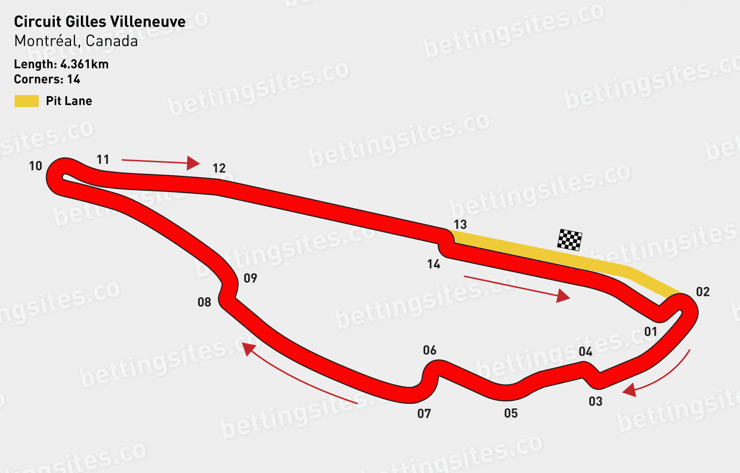 The 4.36km circuit comprises of 14 turns. As one of the shorter tracks it will take 70 laps to complete the 305km race distance. More info...

About the Canadian Grand Prix

The race is widely regarded as one of the most iconic on the tour, with the Notre Dame track (previous name and still widely referred to as this) being based around Notre-Dame Island, which is in turn situated around the St Lawrence river in Montreal. 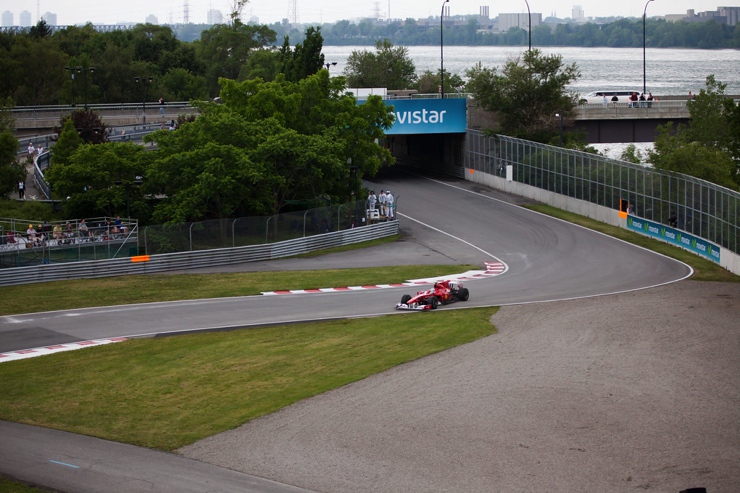 The 4.3km track is one of the driver’s favourite, weaving its way around famous buildings from the 1967 World Fair and also the home of rowing events in the 1976 Olympic Games. Racing in Montreal is always spectacular, and Canada is widely regarded as one of the best venues to see Formula 1 cars at their finest, given the number of vantage points laid out around the track. The track has many challenging corners to accompany a spectacular setting.

Approaching turn 1 at the Canadian Grand Prix, traditionally a low downforce circuit, breaking is tricky to the small left hand turn at 1 and then into the long sweeping hairpin at turn 2. It’s one of the biggest areas on the track for drama, especially at the beginning of races as cars jostle for position.

The driver then needs to make sure the car is positioned perfectly as they come to the first of the chicanes on the race track. If they have been unable to get a satisfactory racing line at turns 1 and 2, then they are really going to struggle to take momentum into these corners.

Drivers need to be very careful through the chicane and take as much of the kerb as possible, without hitting the wall as they come out. The closer the wall better as it allows them more grip and then accelerate through to turn 5 that they will take flat out in qualifying, and possibly for long periods of the race itself as well.

Kinks at turn 6 and then straight into turn 7 require immense concentration at it’s here where drivers need to gain maximum traction for the long back straight. A good run from here mean that cars are easily able to slip stream and often a great place for overtaking coming into turn 8.

The approach to turn 8 needs to be timed impeccably, and with it drivers will start to play the brakes just before the overpass. The “s” bends through 8 and 9 require a good amount attraction and approach the hairpin. Getting the braking zone here is imperative and is a spectacular place for the crowds to sit as it’s another area that benefits from a high number of overtaking spots.

The drivers accelerate out of this and start into the longest straight on the track. The cars hit speeds well in excess of 330kmph here. Their target is a 100m board that they know will be the start of the breaking zone heading into the next turn.

The driver needs to be brave here as they take huge amounts of kerb through the final S bends and then power on through to the line. Whilst a relatively short lap, the track really does have it all, from tight, twisting sections to long straights gaining huge speed. A track the drivers love to take on and one of the best looking on the F1 calendar at the minute, that’s for sure! 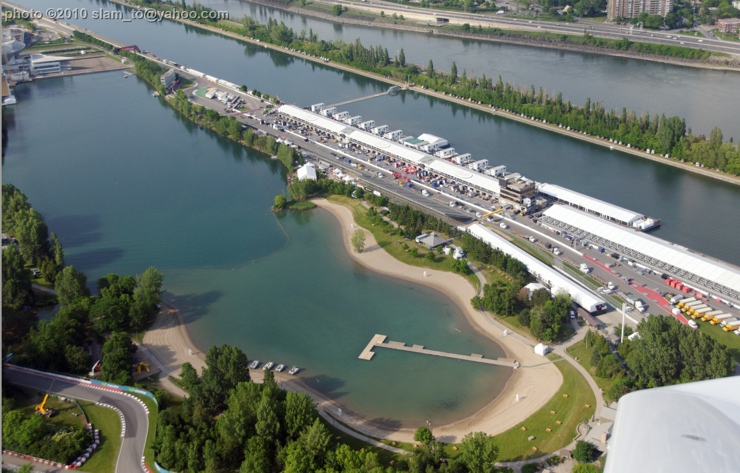 The first official Formula 1 event was held in 1967, although racing had been taken part as part of a Canadian Grand Prix from 1961 at Mosport Park. Other venues in the early years of the event include the likes of Mont-Tremblant, before moving from Mosport Park in 1977 and taking residence at Circuit Ile Notre-Dame, as it was then known, but now more commonly known as the Circuit Gilles Villeneuve.

In an action-packed race in 1999, it was one wall that had particular relevance to one of the most iconic aspect to the Montreal based track. The final corner, which ironically had on “Welcome to Quebec” plastered all over it, saw Damon Hill, Michael Schumacher and Jacques Villeneuve all crash into it at different periods of the race. It was Mikka Hakkinen who benefited most, winning the race and extending his lead over Schumacher to 4 points in the Drivers championship as a result.

Whilst it’s been Michael Schumacher who is the most well-known brother over Ralf, it was the pair of them that manged to dominate the Grand Prix over the course of 9 seasons from 1997 to 2004. Admittedly, it was Michael who was the dominant force, winning 6 of the races, but brother Ralf chipped in in 2001 to pick up just his second career Grand Prix victory.

In 2008, Robert Kubica was pretty much an unknown quantity in F1, still finding his feet in is BMW Sauber. After a solid start to the season, he was able to benefit from crashes to Lewis Hamilton and Kimi Raikkonen to secure his first and only F1 victory. Whilst the win took him to the top of the driver’s standings at the time, he failed to really kick on and ended finishing in 4thposition, with Lewis Hamilton winning at the final race of the season in Brazil.