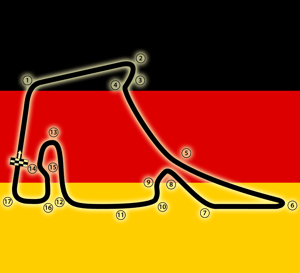 The German Grand Prix had been a firmly established and popular fixture since it was first added to the Formula One World Championships in 1951 but it dropped from the schedule after the 2019 race.

The first ever Grand Prix in Germany was in 1926 at the AVUS track in Berlin. It was won by Rudolf Caracciola in a Mercedes. Caracciola’s six German Grand Prix wins in the pre-Formula One era remains unmatched.

The early F1 German Grand Prix were held at the Nurburgring, with the AVUS in Berlin making a rare appearance in 1959. Hockenheim hosted the race for the first time in 1970 and held every race between 1977 and 2006 with the exception of 1985 which was back at the Nurburgring. The two tracks then alternated until 2014 when Hockenheim became the sole circuit used.

Ferrari have been the dominant manufacturer in Germany, winning 21 Grand Prix, with Williams the next best on 9. Michael Schumacher and Lewis Hamilton share the record for the most F1 German Grand Prix wins with 4 each. 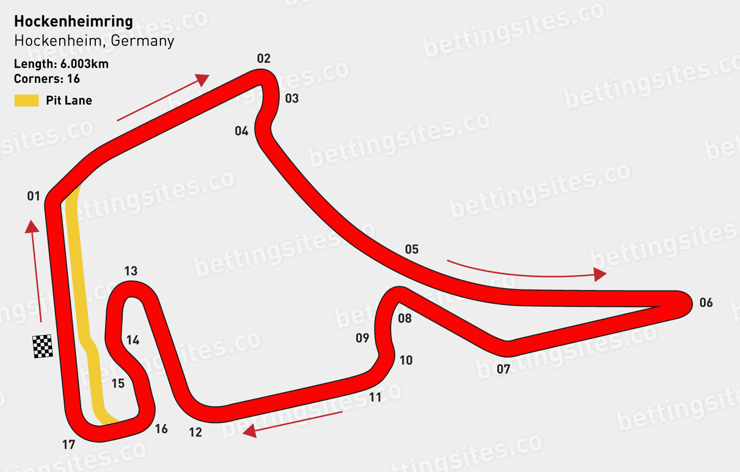 The Hockenheim ring is one of the longer F1 circuits at over 6km. There are 17 corners in this high speed track with the full race distance completed after 67 laps. More info...

About the German Grand Prix 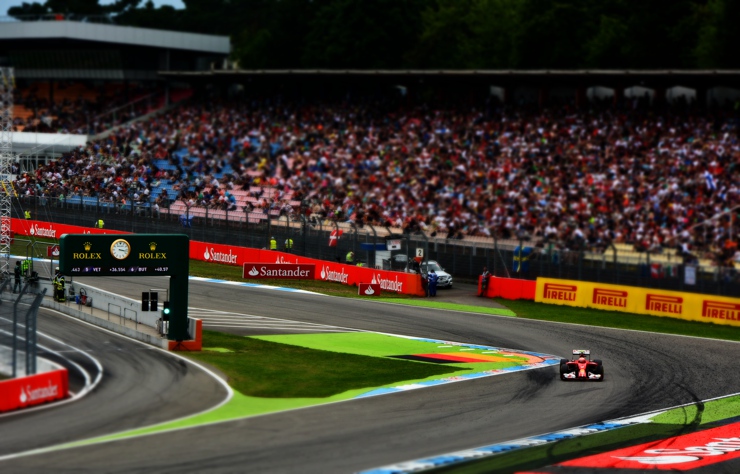 The German Grand Prix is hosted by the Hockenheimring, which is located in Barden-Wurttemberg, a sleepy town within Germany. The track has been hosting Formula 1 since 1970 and whilst it hasn’t always been a firm fixture on the calendar in recent years, the country is one of the best supported races in the world.

The current set up of the German Grand Prix initially had the Nürburgring hosting every other race, but since they were unable to gain enough funding to commit to this deal, Hockenheimring were awarded exclusive rights for the foreseeable future. 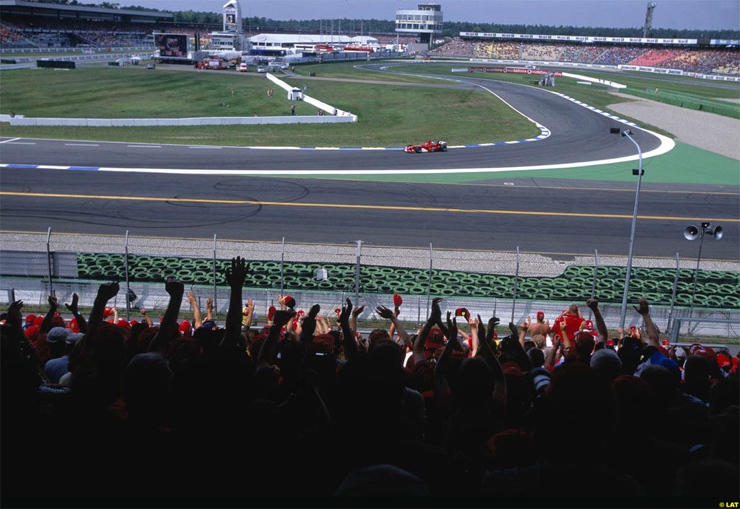 The current 4.574km layout, with 17 corners that was introduced in 2002, is a great place to come and watch Formula 1. The grand stand holds over 120,000 people, who cheer on their heroes and hold their plaques of their favourite teams. With a plethora of German drivers in the current set up, hopes are held high for a home victory.

Hockenheim is in a quiet, rural part of German, but nothing beats the sound of the Formula 1 cars in full flow around the track.

As the drivers come out of the last turn positioning the car for the best acceleration across the start finish line, it’s a relatively short run down into turn 1. High speeds and quickly down the gears, using maximum kerbs on the exit, again making a very sort shift and run down into turn 2.

This is quite a tight entry into turn 2, the cars often tend to oversteer as a result and drivers are required to pull he car back across. The cars then hit the back straight and the driver has time to look around the forest ahead, which was once famously used for the full Grand Prix track.

The driver spots his breaking point at around 330kmph, the drivers need to stay wide initially in the new part of the circuit. They then come up through the flat out kink at 7 and is a positioner as they pull the car to the right, which often is a little bumpy under breaking.

the drivers pass the Mercedes stadium on the right and through the almost flat out kink at 10. Now we come back through the historic stadium of the track. The mighty turn12 means that drivers need to be very narrow on the exit. Thy then run down into 12 and have a long camber change, with a tight line.

They then need to navigate through the kink at 14, 15 and the down into 16. Another section that the cars like to oversteer and then they run hard on the way home. The drivers are able to see the whole of the stadium in what feels more like a football match with the number of fans that are going mad with every pass of a German designed car, such as Mercedes. 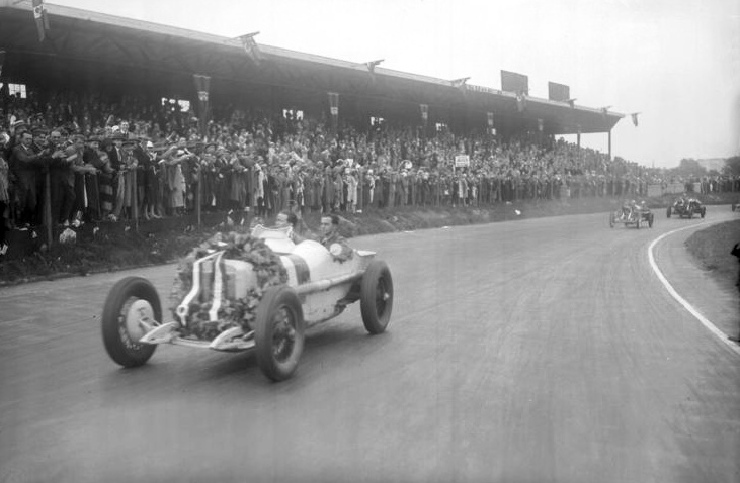 The track has gone through many changes since it was first opened in 1932. Whilst initially considered to be one of the safest tracks in the world, the advancement of the cars has meant that the track has needed to adapt as well. The initial layout was fairly basic, with just 6 corners in total. This track ran through until 1938 when the first of the major changes were made.

The number of corners were actually reduced to just 4, in what was essentially a glorified oval, with a few tight corners involved. The speed of the cars with this layout was one of aspects that drivers loved about the track, but again, as cars got quicker, the track got more unsafe.

The next major redevelopment came in 1992 and this set up ran for 10 years through to 2002. Several kinks were added into the oval shaped track to slow drivers down and with it saw a much more technical track. They also added in a double hairpin towards the end of the track, which as a result gave the track 16 corners in total, the most that had ever been seen at the track.

The current design has been running since 2002 and no longer do they run through the forest. It’s much more in keeping with modern day Formal 1 racing, in that it includes a number of tight, technical areas. The design is one that has been greeted with mixed reviews from the fans saying that overtaking is now very limited, but the changes were required for the most part, due to safety fears.

Michael Schumacher’s 4 wins at the German Grand Prix is the most of any driver in the modern era. His victory in 2006 was his last in his home grand prix and one that was much needed in terms of the title race that year. He ended up winning the race by just 0.720 seconds from his teammate Felipe Massa and more importantly, made vital ground on Championship leader, Fernando Alonso.

But, whilst the result was Schumacher’s third win a row that year he was unable to hold off the challenge posed by Alonso, who went on the win the drivers championship by 13 points, with Schumacher almost gifting him after retiring in the penultimate race in Japan.

One of the craziest Formula 1 races for some time took place in 2000. Everything was at it should be, until some invaded the track after 26 laps and started walking around in the middle of the race. This signalled a safety car until the man was removed, but it allowed people to pit.

It was Rubens Barichello in his Ferrari that took full advantage of this, winning the race by 7 second over that of Mika Hakkinen. But, most importantly, it was the first win of Barrichello’s career and one that will be remembered for a very long time.