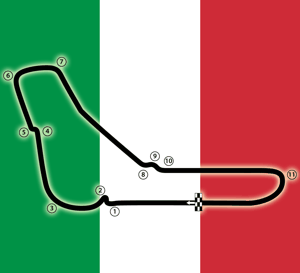 The race is held at the Autodromo Nazionale Monza and is located to the north of the city of Monza, which itself is only around 9 miles from Milan in northern Italy. Monza was built in 1922 and has hosted each Italian F1 Grand Prix with the exception of the 1980 race which was held at Imola due to refurbishment.

The first F1 Italian Grand Prix was one Giuseppe Farina in his home race. The winner of next next two races was local driver Alberto Ascari who was born in Milan. He suffered a fatal accident at the track in 1955 aged 36. The bend where the driver crashed was replaced by a chicane which is now named the Variante Ascari which runs from turns 8 to 10.

There has been numerous British winners of this race, including Damon Hill (2), Stirling Moss (3) and Lewis Hamilton (5). Ferrari have been the dominant manufacturer historically though Charles Leclerc’s win in 2019 was their first since Fernando Alonso’s victory in 2010.

For the Emilia Romagna at Imola, please click here.

For the Tuscan Grand Prix at Mugello, please click here.

The Italian Grand Prix will next race on 12th September 2021. Tips will be added shortly before qualifying starts.

Monza is a sweeping circuit with just eleven corners meaning that racers will be on full throttle for the vast majority of the race. The pit late enters just before the 1.1 km finishing straight, entering just before the tight turn 1 chicane. More info...

The 2020 Italian Formula One Grand Prix from the famous Autodromo Nazionale di Monza will take place over the course of this weekend. This is the latest double-header of this unique F1 season and will be the first of two Grands Prix on Italian ground in the space of seven days. We have been treated to seven spectacular races thus far, with Sunday’s Grand Prix being the eighth round of an unforgettable 2020 season.

Current World Champion Lewis Hamilton leads the way at the top of the standings, picking up an astonishing 157 points after seven races. Nobody can get near the Brit, with Max Verstappen, who sits second, a whopping 47 points behind ahead of this weekend’s race. Valtteri Bottas is currently in third, just three points behind the Red Bull man and Mercedes are already more than 100 points clear in the Constructor’s Championship.

This promises to be a thrilling Grand Prix over 53 laps at the excellent Monza circuit. Lewis looks unbeatable, but can Verstappen cause an upset and win his second Grand Prix of the year? Will Bottas get back on top of the podium after Hamilton’s recent dominance? Who will finish in the points?

World Championship leader Hamilton is the Grand Prix favourite yet again and as ever, he looks very hard to oppose, even at short odds. The 35-year-old has hardly put a foot wrong in this season’s championship, winning five of the seven rounds. Since starting with a fourth place in Austria back in July, Lewis has won the Styrian, Hungarian, British, Spanish and Belgian Grands Prix, finishing runner-up at the 70th Anniversary Grand Prix at Silverstone along the way.

Hamilton is closing in on Michael Schumacher’s Grand Prix victory record, with the Brit now just two race wins behind. Lewis needs just three more Formula One Grand Prix victories to beat the German’s incredible record of 91. With Hamilton in fine fettle, the Stevenage-born star will surely get the job done this season and set a mark that may never be passed. The No. 44 looks unstoppable at the moment and is our pick to win the 2020 Italian Grand Prix at Monza this Sunday (1/2).

Those odds may appear short but they imply a 67% chance of him winning and he has already won five out of the seven races so far (more than 71%). Given that fact and Hamilton’s five previous wins at the Italian Grand Prix, including four in the last six years, 1/2 looks very solid, so don’t miss out.

The excellent Charles Leclerc has been getting the best out of Ferrari’s limited car this season. The Monaco man has finished on the podium twice, securing a second in Austria in round one before taking third place in Great Britain in the fourth round. However, the last two races have been disappointing for Leclerc, as he retired in Spain and finished in 14th in Belgium.

Teammate Sebastian Vettel has endured an even tougher time in the famous Ferrari car so far this term. In fact, sixth place in Hungary is the best finish of the German’s season up until now. Last time out, Vettel finished a place ahead of Leclerc in Spa but we expect the youngster to bounce back here in Ferrari’s home Grand Prix.

Leclerc is without doubt one of the best drivers in Formula One these days, and big things are expected of the youngster in the upcoming years. The Monte Carlo-born ace won the 2019 Italian Grand Prix at Monza but is unlikely to finish on the rostrum this year. Nevertheless, we are backing Leclerc to finish in the top six on Sunday at 5/1.

Those really are huge odds considering his win last year and if you don’t want to back Hamilton at odds-on this is an excellent alternative. At even bigger odds, consider backing Leclerc to force his way onto the podium at the huge price of 66/1. It’s a long shot but the value is certainly there in our opinion.

About the Italian Grand Prix 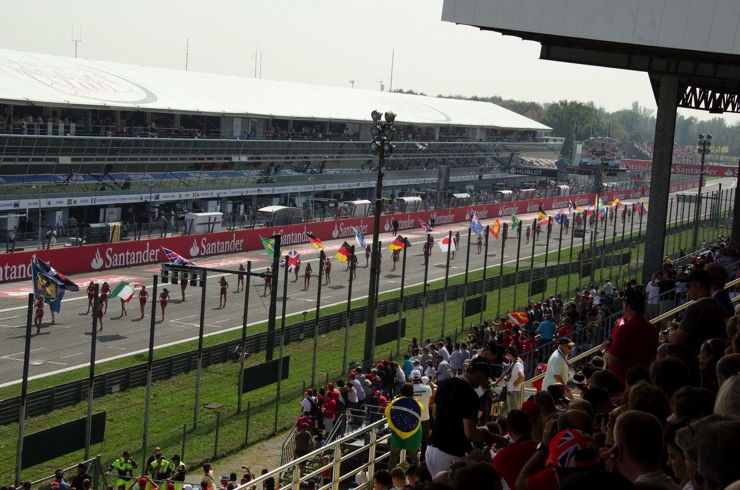 The Italian Grand Prix, as well as the British Grand Prix, has been held every year since the start of the Formula 1 championship races in 1950. The track is synonymous with motor racing and whilst not the official home of Ferrari, it is widely considered to be the motor racing home for one of the most famous Italian exports.

The host of the grand prix is that of Monza, which in itself has played a huge role in the success of Italian motorsports. It’s seen many layouts and formats over the years and tweaks have been made tonto only make the track safer, but also more exciting for both drivers and fans. 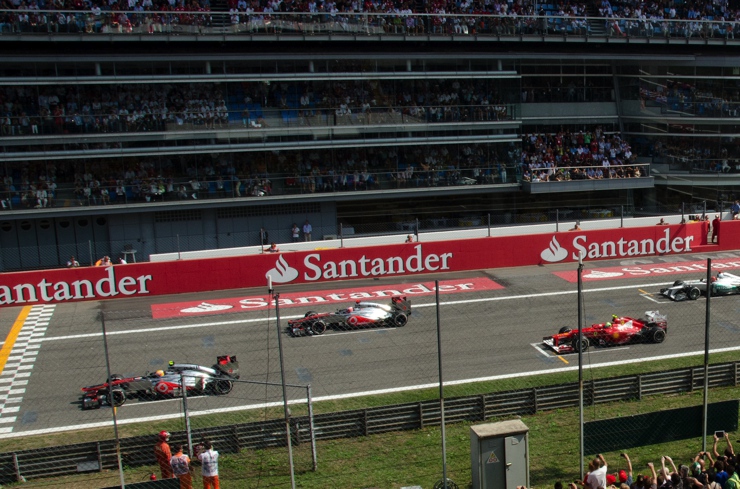 Monza is the fastest and one of the most historic circuits in Formula 1. Situated in the picturesque Royal Park, a short drive north of Milan in Northern Italy, Monza is known as the “Temple of Speed”, with drivers at full throttle for three quarters of the 5.37km lap. As a result, the teams set up their cars with very low downforce, which increases the top speeds as it creates less drag through the air.

The long straights are made up of famous corners, such as Curva Grande, Variante della Roggia, Varianre del Rettifilio and Variante Ascari, to make up what Italian’s call the Magic Track. For many, there is no other track that captures the sport like Monza does. The Ferrari fans turn the racetrack red and a true carnival atmosphere is set up for the entire race weekend.

The track starts on the pit straight, which is also the first DRS Zone on track. The drivers reach speeds in excess of 340kmph and they are constantly looking left for the 100 yard board, which is the start of a brutal breaking zone before heading into a very tight chicane where cars get as slow as just 70kmph. The drivers must kiss the apex on each corner to make sure they get optimum drive through and out of this section.

The next section is through Curva Grande and it’s all about being as flat out as possible without scrubbing too much of the tyre. The cars will be situated just inside the apex for this exact reason and they are pretty much at top speed by the time they see the bridge and start breaking into the next turn.

The second chicane now greets the drivers and again, they must use as much of the kerb as possible here, where are fairly tame compared to most tracks. The drivers then head under the trees and the light change here as a result is often something that has been compared to the tunnel in Monaco and something that often catches drivers out in terms of nailing the most optimal line through here.

The cars are then going through a short run into the second of the two middle section corners. A good line is imperative as they must get a good drive into the back straight and utilise another DRS zone. The cars then head back down the bank before coming back up and hitting the Ascri chicane. They are carrying huge speed into the left hander and then the right handers here, again using as much of the track as possible to get the best possible run out.

Coming out of the final part of the chicane, the drivers then need to be able to run slightly wide before a look along another of the longer straights. Cars will be hitting almost top speed here of 340kmph and trying as hard as they might to not scrub any speed along here.

The final corner sees the cars sweep through at around 240kmph and with it try and find the straightest line possible to start the next lap. Whilst the final corner seems pretty tame, it’s actually been the scene of many races that have seen last minute overtaking with drivers becoming too cautious and not getting on the throttle quick enough before crossing the line. 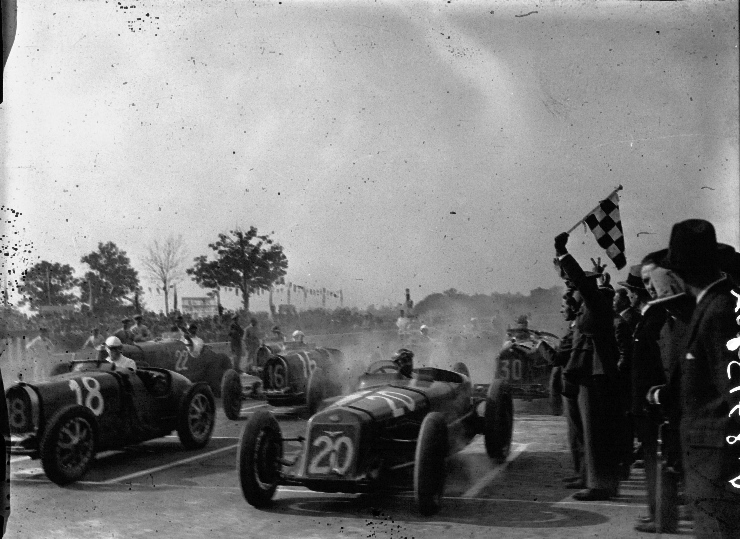 The track was initially built in 1922 and was financed by the Milan Automobile Club. It’s maiden race was that of the Italian Grand Prix and with it has been the scene of some of the most iconic races in the world as a result.

The current set up sees three tracks in total. The Oval, the Combined course and the Modern Grand Prix Circuit. The Grand Prix circuit has seen many changes over the years, as you would expect, with the original track having just 8 corners in total, to the most recent version including 11, mainly added to slow cars down because of safety concerns, but also to promote overtaking.

In 2008, Sebastian Vettel made history at the Italian Grand Prix, Monza, where he became the youngest ever winner of a Formal race in the history of the sport. The rain came down, which played into the German’s hands, before then going on to securing pole, before taking off after a safety car start leading the whole race – bar 4 laps when pitting – and securing his first win.

Schumacher had just taken the hot seat in what was a failing Ferrari team at the time. They had won just two races in 5 seasons and were widely regarded as a “had been” of Formula 1. But, Schumacher had already managed to win in Spain and then again in Belgium, before going on to win at the home of Ferrari, cement his place in the Ferrari and Monza folk law in a very short space of time.