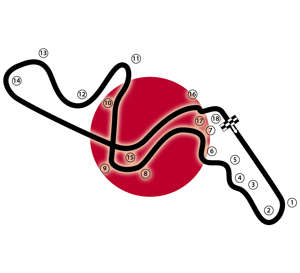 The Japanese Grand Prix is held at the Suzuka Circuit, which is located in the city of Suzuka on Japan’s main island of Honshu. Suzuka is over 300km from Tokyo but only 100km from Osaka and just 50km south of Nagoya.

The first Grand Prix in Japan took place in 1963 at Suzuka, won by Britain’s Peter Warr and his Lotus 23. The first Japanese Formula One Grand Prix was in 1976. That race was held at Fuji and was won by legendary American driver Mario Andretti. Britain’s James Hunt won the second Japanese F1 Grand Prix in 1977.

Suzuka was designed and built by the Honda motor company who have a factory just 2km from the track. The first Grand Prix here was in 1987. The circuit has a distinctive figure of eight layout and is hugely popular with both drivers and F1 fans.

Michael Schumacher was a serial winner at this circuit during his illustrious racing career, winning at Suzuka on six occasions. Lewis Hamilton is just one victory behind the German with five wins. 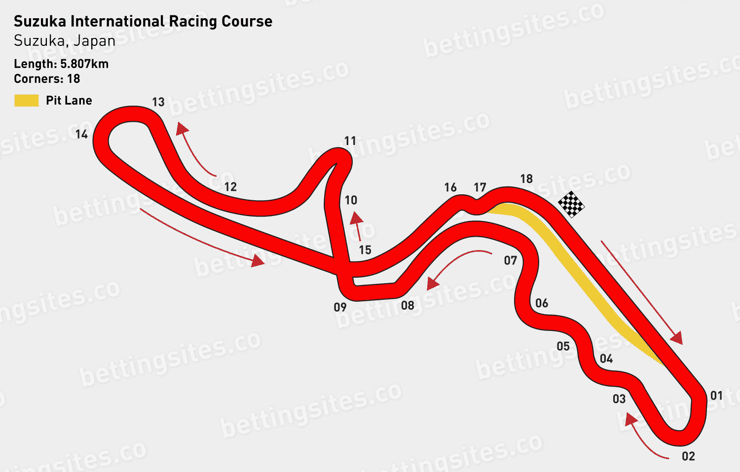 Suzuka's figure of eight track covers 5.8km and incorporates 18 corners, with the underpass after turn 9. The race length is just over 307km, which is 53 laps. More info...

About the Japanese Grand Prix 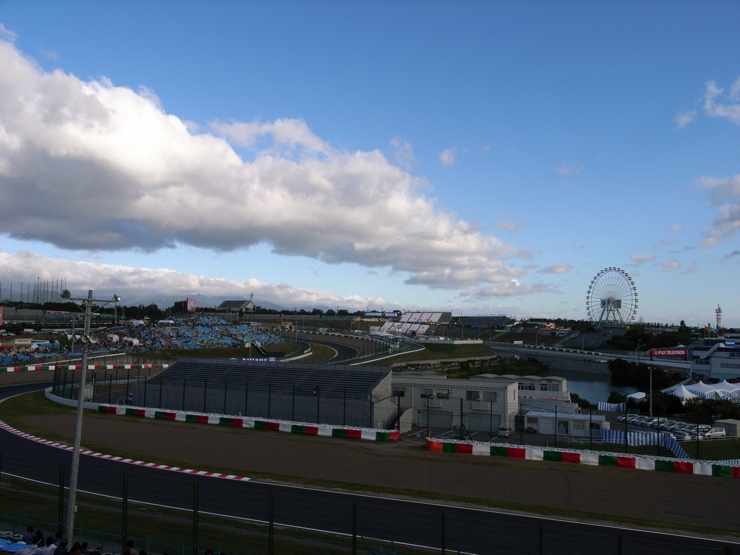 Japan’s Suzuka Circuit is one of the most recognisable racetracks in the world. It’s the only track on the F1 calendar that is in the shape of a figure 8, with the track passing back under itself at the mid-way point. Whilst it’s been Formula 1 that has arguably put the track on the map and injected a massive following in Japan, the track has been able to host other events, such as the World Touring Car Championship, Super Gt, Moto GP and many more.

The track was originally designed and developed by Soichiro Honda as a test track for Honda with tehri car development. But, it was deemed just too good to only be used behind closed doors and since 1952, racing of the highest calibre has been held here. 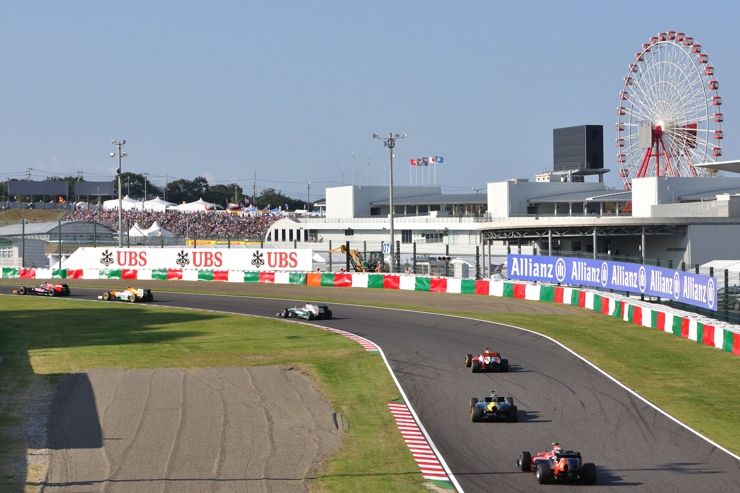 The Suzuka circuit lies south-west of Nagoya, Japan’s third largest city and is revered by drivers and the teams. The 5.8km circuit is famed for its figure of 8 layout and includes famous corners, such as the Spoon Curve and 130 R.

But, what really makes Suzuka special is the fans and they turn out in tehri drives to catch a glimpse of tehri favourite racing team, whether that be F1 or other motorsports. The race has often been at a pivotal time in the championship and it always provides a huge challenge for both the drivers and the teams.

The drivers set off down the pit straight, which is the first of the DRS Zone. There is a big elevation drop down into turn 1, which is something that many people watching on TV don’t see. This means that drivers have to nail their breaking zone and get on a little earlier than they might If it were a flat run down.

The drivers need to be fully committed into the corner, as it’s extremally fast taken at speed around 260kmph, before then breaking through the second part of the corner as it tightens quite considerably and has huge lateral G fighting against the driver’s neck.

We then move into one of the best sequences of corners anywhere in the world with the “s” turns. The corners move from left to right, rising up behind the pit complex – all the time with drivers fighting to get on full throttle as soon as possible. They then head over the top and drop down again looking for a late apex before riding up through Dunlop curve.

Drivers are then trying to take the corner flat, which it almost is throughout qualifying, although at the same time trying not to scrub their tyres and lose time. The next two corners the drivers are going to use a lot of the kerb, before having to drop down into the second of the two corners and accelerating through.

They then pass under the bridge on this brilliant race track before cruising through the kink and heading into hairpin. The will be looking for a late turn in for use of maximum acceleration throughout the corner.

The longest corner of the track awaits next and whilst it’s pretty easy in the dry, in the wet, which it often is at Suzuka, it can be very tricky in terms of how much power to put down. They then move into Spoon corner and run from kerb to kerb fighting to try and carry as much speed as possible through this.

The cars rise up the track again, heading over the crossover section. Interestingly, the bridge always creates a little ripple in the tarmac, which means that there is always a bump here for the drivers just to be aware of. They then hit 130 R a corner once feared by the drivers, but it has been improved of late in terms of the run off, allowing a little more speed to be carried through safely.

Next up is the famous chicane – the scene of when Prost and Senna came together and then straight into the final corner trying to find the best line, coming down the hill and across the start finish line. 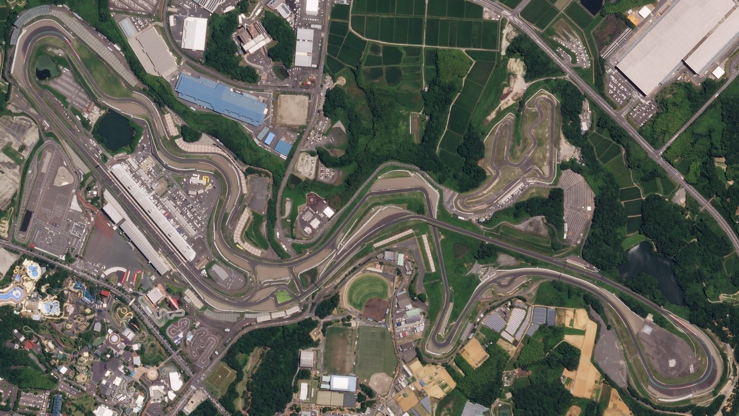 The first formula 1 race was held in 1976. At the time, Suzuka was already a highly established track for motor racing, hosting several Japanese Grand Prix’s, albeit non-championship races. Since then, the track has been modified four times in total. The first came in 1983 when a chicane was added to the last curve to slow cars down through the pit straight. A host of crash barriers and run off areas were also added to increase safety.

The next change came about in 2002 when the chicane was lightly modified, and the 130 R corner was also made a little safer. A year later, 130R was tweaked again, increasing run off area even further and general improvements to safety were made as a result of the death of Daikro Kato in 2003.

Alain Prost and Ayrton Senna went head to head in 1988 for the world title. The pair were widely considered to be the best two races on the planet at the time and the pair qualified in first (Senna) and second respectively to set up the race perfectly.

Dramatically, Senna had stalled on the grid at the start of the race, giving Prost an early lead. He dropped to 14th place but quickly made a charge through the field. By lap 14, the rain started to come, which benefitted Senna. Prost’s gearbox was playing up and by this time and Senna was right behind him. Prost had been held up in back markers for much of the race, which Senna pounced on.

Senna went on to win the dramatic race by 13 seconds, running slick tyres in the wet for much of the race. He then went on to win the Drivers World championship by just 3 points over Prost, which was also the points difference for that race.