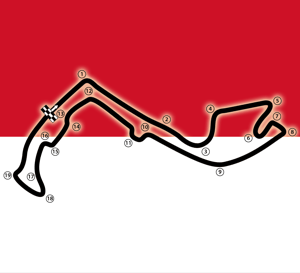 For many fans the Monaco Grand Prix is the standout event of the F1 calendar, with plenty of stars ordinarily in attendance for the race.

The Monaco Grand Prix is famous for being a tight city circuit, winding its way around the Monte Carlo streets and harbour front.

The first Grand Prix here was in 1929, won by British driver William Grover-Williams in his Type 35 Bugatti. Monaco was the second of seven races in the first F1 World Championships in 1950 when won by Juan Manuel Fangio, and has been a permanent fixture from 1955 onwards.

Ayrton Senna has the most wins of any driver with six, one ahead of both Michael Schumacher and Graham Hill. 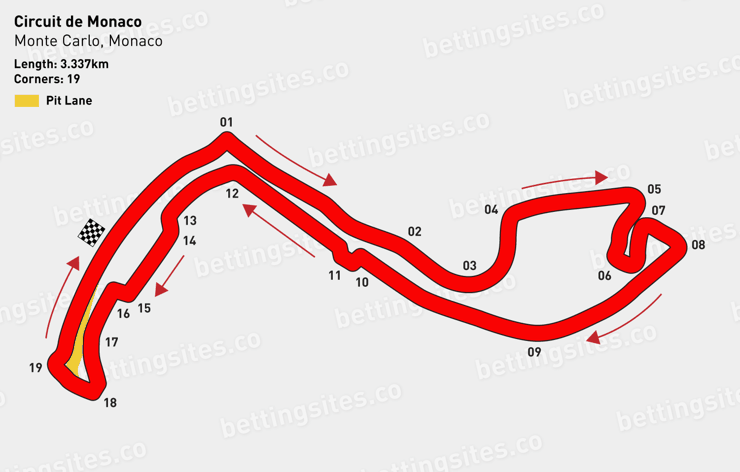 Monaco is a narrow track with limited overtaking opportunities. There are a total of 19 bends with a full circuit of just over 3.3km. More info...

About the Monaco Grand Prix 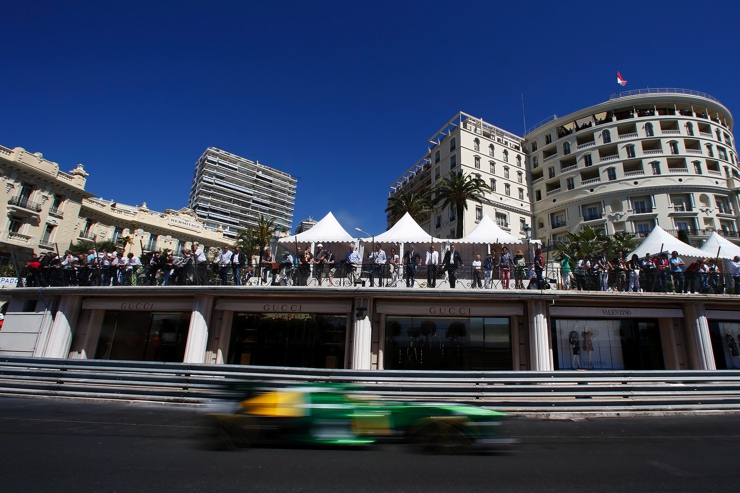 The Monaco Grand Prix is one of the most iconic sporting events in the world, let alone F1. The meeting personifies the glitz and glamour that Formula 1 is often famed for, with the rich and famous coming out in droves to be a part of the action.

The track is one of few street races that is currently run and it’s the oldest street race in the calendar, as well. What’s unique is that it’s run throughout the streets of the second smallest country in the world. The run down through the harbour allows billions of pounds worth of yachts, full of spectators to overlook proceedings. 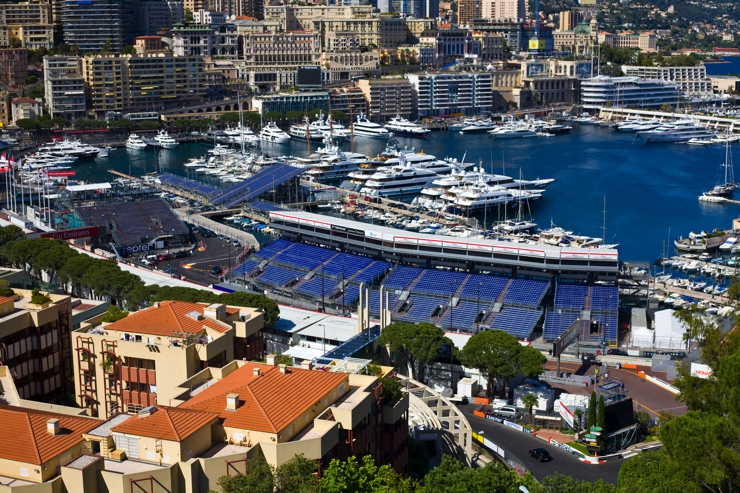 Located in the French Riviera, close to the Italian border, the race has been a regular fixture of the World Championship since 1955. But, in that time, the circuit has changed remarkably little. It’s the shortest and the slowest lap of the year, with cars operating on maximum downforce and brakes working about as hard as they will all season.

Overtaking is tough, with just 1 DRS Zone in the entire race, so qualifying in Monaco is more critical than any other grand prix. The famous harbour is home to the rich and famous over race weekend, with iconic and memorable views everywhere you look.

The cars come across the start finish line and the drivers are trying to position themselves to get as straight a breaking zone as possible coming into turn 1 to allow maximum downforce and shorter breaking zone. The cars have a slightly rise up after the apex and then enjoy a high-speed roller coaster ride as they climb up the hill, absolutely flat out in the process.

This section is very narrow, and you often see the cars kissing the barriers as they complete their ascent. The next turn is a very tricky, long left hander that goes into casino square. Traction is key here and the more speed they can carry, the more grip they will be able to achieve.

They then start to work their way back down the hill and pull slightly to the right to avoid what is actually a tree root situated under the track. The Fairmont hairpin is one of the most iconic places on the track as it’s often one that car spotters gather when race weekends aren’t taking place to catch a glimpse of an array of supercars. The corner is the slowest on the racetrack, with maximum lock required from the drivers.

The drivers then need to negotiate the famous right handed, where Senna ended up in the barrier whilst leading a race by over 30 seconds. They then head into the darkens of the tunnel, with the light change proving to be a big issue and often drivers are running on memory here until their eyes are able to adapt to the light.

They pass by the impressive yacht club on the left, before spotting their breaking zone and into the first of the chicanes and one of the few overtaking opportunities during the Grand Prix. It’s now into one of the best sequences on this racetrack.

Cars reach speeds of veer 250kmph per hour through the high-speed chicane, which requires a brave outlook with the change of direction included, as well. The next chicane is much slower as drivers start to get towards the end of the lap.

Cars then slow down as they approach Rascasse corner where the cars will have a shallow exit and short run into the final turn, known as the Antony Noghes corner, named after the organiser of the first Monaco Grand Prix. Drivers then sprint for the finish line as they work their way back up the hill. 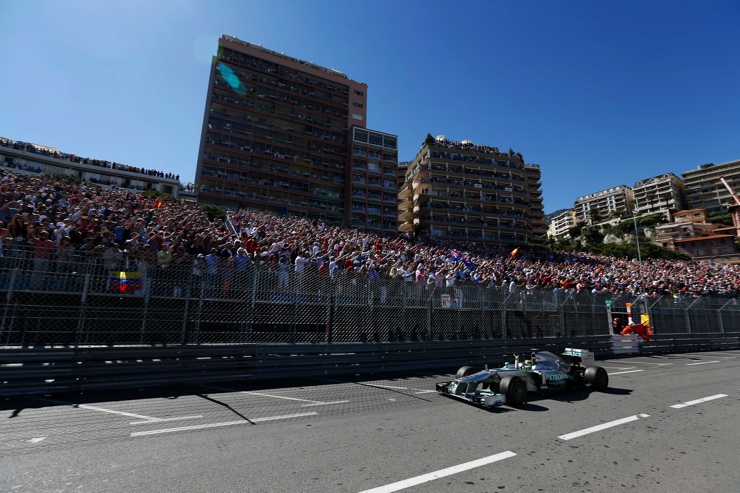 The first Grand Prix that was held in Monaco was back in 1929. It was Prince Louis II that was the driving force behind the race, but it was Antony Noghes that was the race organiser. The race was then held from 1929 through to 1937, before featuring just 3 times before 1955 – mainly down to the war.

Since then, it’s been one of the stalwarts of the drivers’ championship. The track has come under criticisms of late however, with many stating that the lack of overtaking sections makes for a pretty boring race. But, purists will argue that F1 is as much about strategy as it is overtaking, which has a huge role to play in this race.

Graham Hill was the dominant force throughout the sixties at Monaco and his 5 race wins crowned him the nickname as the “King of Monaco”. Hill was able to win his first race in 1963 and from there had been able to dominate several races since then. He is still regarded today as one of the best drivers that the track has seen and only Ayrton Senna has managed to top his 5 wins, with 6 in total.

Only two drivers won the Monaco Grand Prix between 1984 and 1993, in the form of Ayrton Senna and Alain Prost. The pair were at the peak of their powers and whilst Senna came out on top of the battle 6 times, it was often Prost who was pushing him hard to create a piece of history and widely be regarded as two of the best drivers of all time.

Whilst qualifying isn’t usually as interesting as the race itself, around Monaco, as mentioned previously, it holds as high regard as any of the tracks in the world. This was highlighted in 2006, when Michael Schumacher, after being provisionally in pole position with qualifying drawing to a close, parked his car on the track, blocking opposition and forcing them to drive around and essentially lose all time on their final flying lap.

Schumacher claimed that he had to stop due to car failure, but the FIA disagreed and eventually he was to start the race from the back of the grid. He eventually finished in 5th position, with Spaniard, Fernando Alonso, picking up the win and extending his lead at the top of the drivers’ championship, before going on to win by just 13 points over Schumacher in what was determined to be a pivotal point in the season.