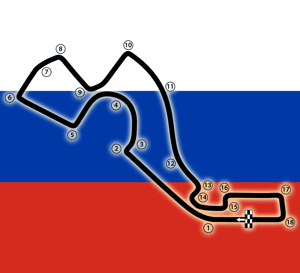 The Russian Grand Prix is a relative newcomer to the Formula One calendar having first been held in 2014. The track is located in Sochi, in the far south of Russia on the Black Sea. The track is by and large a street circuit which navigates around the $50 billion Olympic Park which was built for the 2014 Olympic Games.

Lewis Hamilton in his Mercedes won the very first F1 Russian Grand Prix in 2014 ahead of his then team mate in second, Nico Rosberg, his future team mate in third, Valtteri Bottas and former team mate in fourth, Jenson Button. 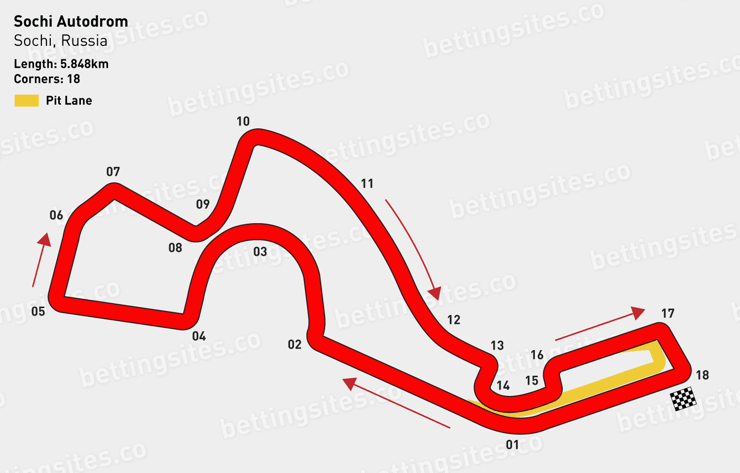 The Sochi Autodrom is a street circuit which winds its way around the Sochi Winter Olympic Park. A tight and twisting track there are 18 bends to be negotiated each lap including the left handed turn 3 which sweeps past the Poyushchiye Fountain for ¾km. More info...

About the Russian Grand Prix 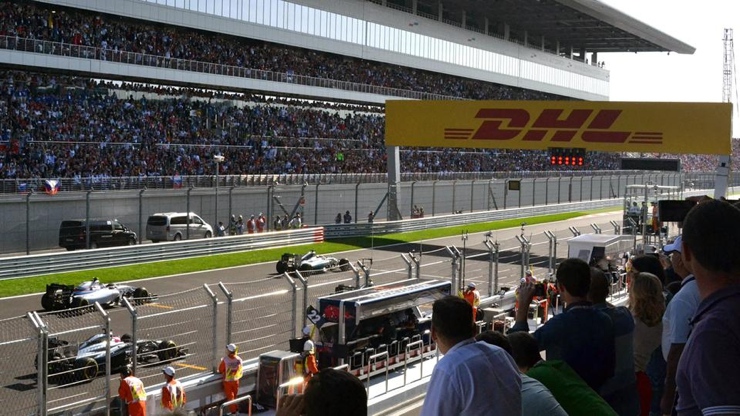 Russia is one of more recent additions to the F1 calendar. The first championship race was held in 2014 and since then has seen a lot of praise for both the Sochi Autodrom track and the set-up of facilities that are based around the track.

The initial plans were for the race to be brought in around the 2010 season, but with the preparation of the Winter Olympic games in 2014, it was decided that the best timing would be upon completion of this. The track runs around the Olympic village and, as such, signed a 7-year deal, running from 2014 onwards. 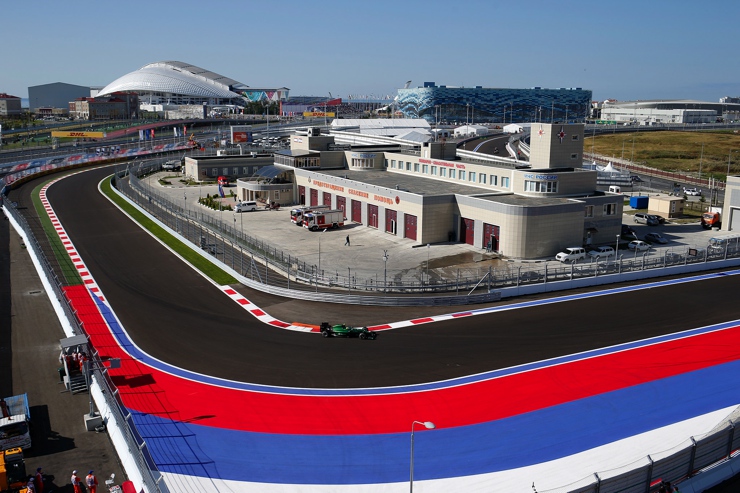 The spectacular Sochi Autodrom, which played host to both the Olympic and Paralympic winter games, weaves its way around the Olympic park. The 5.85km circuit runs clockwise, consisting of 12 right and 6 left hand corners, combining technical sections, with 2 long, high speed straights.

The track is fourth longest in the F1 calendar, with good overtaking spots at turn 2 and 13, as well as 2 DRS zones, allowing drivers to really push the cars to their limits. Sochi is one of six cities that has hosted both an Olympic games and a World Championship Grand Prix.

The drivers head across the start finish line and through turn 1, absolutely flat out. The corner is more of an inconvenience more than a challenge as they fight for position of the line. They then approach speeds well in excess of 330kmph as they fly through the first DRS zone.

The cars then run through the tight and tricky turn 2 before immediately hitting turn 3, which is longest on the track and feels as though it’s never ending, such is the severity of the corner. The corner causes huge G force on the neck of the driver and whilst many choose to take quite a tight line, there are many different lines that drivers can take to get the maximum performance from their cars.

Turn 4 and 5 are both pretty straight forward, although the former does tighten which can appear to give drivers more room than they have. Kimi Raikkonen and Valtteri Bottas famously came together here in 2015.

The drivers are then faced with a kink at turn 6, which they take flat out and doesn’t really affect them, before heading into another tight run at 7 before running down to turns 8 and 9 where the track starts to get a little more interesting.

These corners are designed to really work the car and it’s imperative that drivers are able to get a good line into turn 8 to ensure that they are able to get a good drive out of turn 9. It’s also an area that works the right-hand side of the tyres very highly, which is something that needs to be monitored by the teams throughout the race.

Cars have to work through a big stop down into 10 and it’s important they nail the line once again in order to get a good drive through the long DRS Zone and through turn 11 as well. The drivers are then faced with a tricky breaking zone going into turn 13, which sees them have a lot of lateral load as a result.

Immediately from turn 13 is turn 14 and the drivers will be struggling with oversteer here for the most part, kissing the apex on the way out and using as much of the track as possible. Down towards 15 and 16 is the “Monte Carlo” section of the racetrack where the drivers need to feed the car through the “s” bends. No heroics can be made here and it’s a matter of coasting through to get maximum grip as they come into the final few corners of the track.

The cars run down into turn 17 where they take at speed, before having another tricky breaking zone before the final corner, essentially losing all momentum as they run back towards the start finish line. This final section is one where cars with lower downforce really have an advantage here as they are able to get on the power quickly, through the gears and take on the overtaking sections in turn 2. 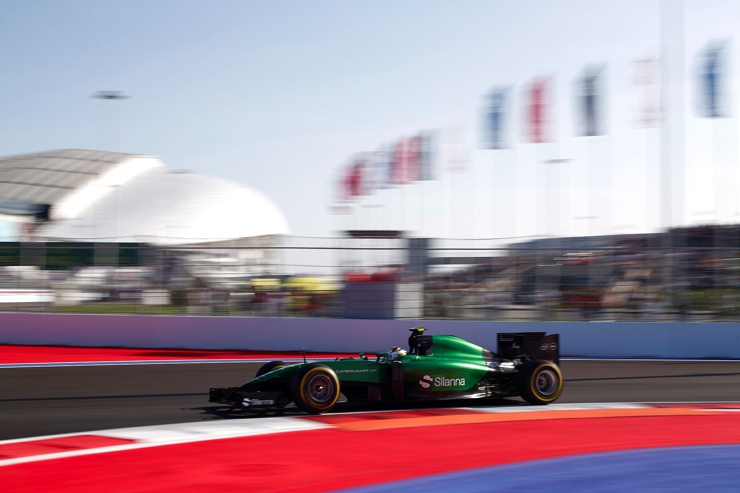 The track took three years to make, after breaking ground in 2011 before being completed shortly before the start of the Winter Olympic games in 2014. It’s been incorporated as part of the Olympic village at a cost of almost $200 million.

The award of the Russian Grand Prix to Sochi came on the back of almost 30 year’s worth of work to bring Formula 1 racing to Russia. Many bids were abandoned for “bureaucratic reasons” and several failed attempts were made in that time. The final green light was given by the FIA in 2014, allowing the 2014 Russian Grand Prix to go ahead, with the winner, Lewis Hamilton, receiving his award from the president, Vladimir Putin.