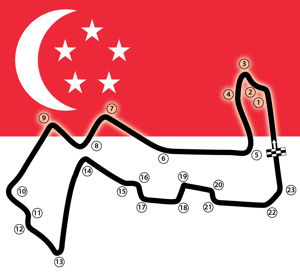 The Singapore Grand Prix takes place at the Marina Bay Street Circuit to the south and east of the island.

This race was added to the Formula 1 calendar in 2008 but there was previously a Singapore Grand Prix in the Formula Libre series between 1966 and 1973.

Currently Singapore is the third of five street circuits in the F1 season following on from Monaco and Azerbaijan, with the Australian and Abu Dhabi Grand Prix later in the season.

The race is run at 8pm local time, meaning the track needs to be lit by artificial lights. This was the first F1 race to be run under lights, with Bahrain following since 2014.

German driver Sebastian Vettel is the race’s most successful driver with five wins for both Red Bull and Ferrari. His victory here is 2019 was his only win of that season. 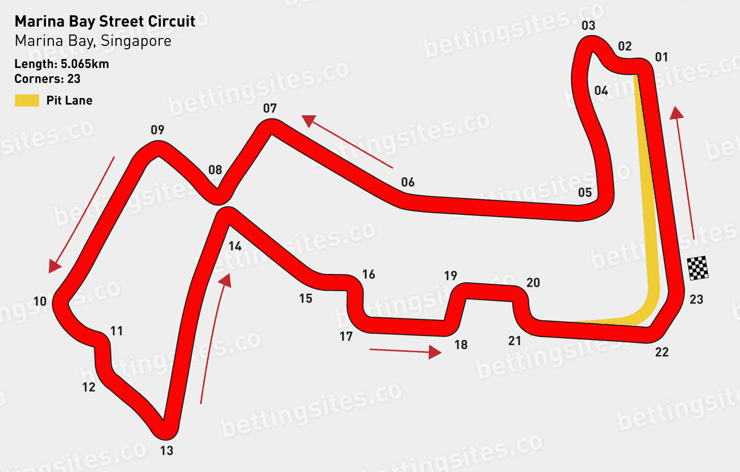 The Marina Bay Street Circuit covers just over 5km of Singapore streets and with 23 corners, the drivers are constantly working hard to get round each of the 61 laps. Despite being held in the evening, track temperature are still high and conditions are humid. More info...

About the Singapore Grand Prix 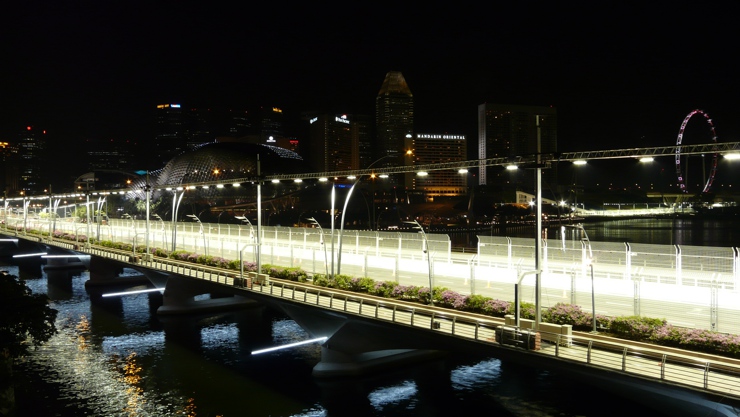 There are few more breathtakingly stunning Grand Prix circuits than that of Singapore’s, Marina Bay. Even through the day the sights and sounds of the Marina are a stunning place to be, but when the lights get turned on and racing takes place, the cars and the race really comes alive.

The Grand Prix has been running in the country since 2008 and the track took 1 year to the day to complete, at a cost of $33 million, which is actually quite cheap compared to some. Attendances have been pretty consistent as well, with over 300,000 visiting in the first race weekend, and now averaging around the 250,000 mark, making it one of the biggest. 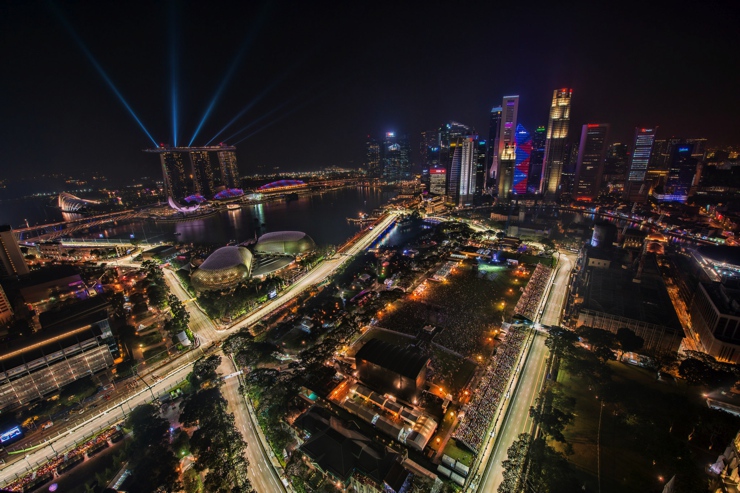 The Marina Bay played host to Formula 1’s first ever night race, where the bright lights lit up the grandstand and cars glistened under the city’s futuristic skyline. The race is one of the toughest of the year, with humidity around 80% and air temperatures, even at night, around 30 degrees Celsius.

The circuit has the most corners of the season, with 23 and with drivers working this hard under the extreme heat, they can lose up to 3kg of body weight during the race.

As cars go across the start/finish line and into turn 1, it’s a fun little section for the drivers, going back and forth through three turns. Cars often are at the highest level of grip here and this allows them to push hard toward the wall, where they are then able to get most traction and the best line out of the section.

You immediately get a sense of it being within a street track, with the walls being very close to the circuit and cars using a lot of the kerb as they move through and onto the back straight. Physically, this is very demanding on the drivers and as they move through the DRS Zone. A lot of pressure is felt on their heels and the back of their legs due to essentially supporting your body on what is known to be a fairly bumpy race track.

As we move into turn 8, this is one of the tighter sections around the track and drivers need to pull the car very much across the track to get the right line into an open turn 9 and then on to what is a reasonably lengthy straight down onto the chicane. Drivers actually use this straight to check on their controls how their lap is going and see if any changes need to be made. It’s one of the few parts on the track they can do this, so it’s an important section.

The chicane is a fast one, with drivers being able to take a lot of the kerb at speeds of around 150kmph, before heading through the “S” bends and then under the tunnel. Drivers then need to take on turn 13, where they can run wide and then across the Anderson bridge, which is more like a motorway than a racetrack given how wide it is. The width also encourages overtaking and slip streaming is done in the run down to turn 14.

The back end of the circuit has a lot more of a street section feel to it and is an area that allows the drivers many different routes throughout the chicanes. Some may choose to clip the apex in order to get a tighter line, but others will run wider in order to be smoother and a little less on tyre use.

Next up is a totally unique section of any race track in the world as drivers actually pass under the grandstand, which creates an amazing view for fans that are sat above it before seeing them, disappearing beneath their feet. Drivers will work through yet another chicane at turns 20 and 21, whilst really getting a feel that they are coming towards the end of the lap.

It’s a great finish section as well and a real rush for the drivers as they meet corners 22 and 23 with high speeds and starting the run back across the start/finish line. 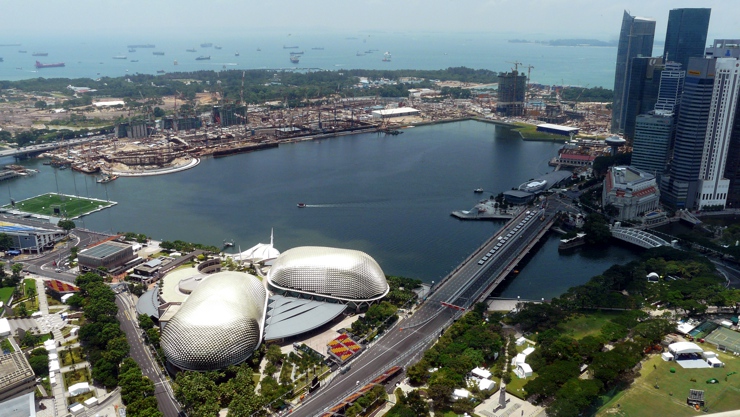 The deal for F1 to head to South East Asia, and more in particular, Singapore, was struck in 2008 by both Bernie Ecclestone, the head of Formula 1 and the Singapore Tourism Board. As part of the deal, it was agreed that the government would co-fund the race, paying around $90 million of the $150 million paid to host the event.

2008 saw Singapore host its first Grand Prix. It was met with huge celebration from within the country and with it hundreds of thousands of flocked to the race meeting over the course of the weekend. The race was eventually won by that of Fernando Alonso, who incredibly started in 15th position before working his way through the field.

But, it was Nelson Pique Jr. and the Renault team that took the headlines. Pique Jr. crashed out of the race on lap 14, which meant a safety car was deployed. This played into Alsono’s hands as it meant that the gap between him and Massa, who was leading the race, was massively reduced. Alonso, on the fresher tyres, was able to pass Massa and win the race.

But, it was later reported, after Pique Jr. had been dismissed by Renault that he was ordered to crash his car so that Alonso would get a chance of winning. As a result, Renault accepted their fine, were suspended for 2 years and bosses, Flavio Briatore and Pay Symonds, were removed from their positions within the team.