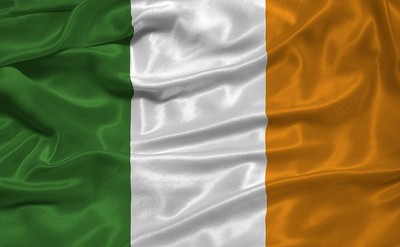 The FAI Cup is the primary domestic cup competition for football clubs playing in the Republic of Ireland with the addition of Derry City from Northern Ireland. This tournament is run by the Irish FA, with the competition’s full title the Football Association of Ireland Senior Challenge Cup.

The cup was founded in the 1921/22 season. The winners of the inaugural trophy was St. James’s Gate who were created as the works team of the St. James’s Gate Guinness Brewery. The League of Ireland was also played for the first time this season with ‘The Gate’ winning the league and cup double.

Historically, Dublin based Shamrock Rovers have been the most successful side in the FAI Cup, with 25 titles to date. This includes a run of six FAI Cups in a row between 1963/64 and 1968/69.

The FAI Cup is far from the lengthiest cup competition you will find on the continent. There are only six rounds in total, including qualification, and there are no replays except in the quarter and semi-finals. Nevertheless, even the teams that avoid the need to qualify must win five successive matches if they are to lift the trophy so it is no easy feat. As the Irish professional leagues switched to being summer leagues in 2003, the FAI Cup made the switch at the same time. This means that the tournament usually begins in spring and concludes in November/December.

This cup competition is for teams from the Republic of Ireland although there is regularly one exception to this. Derry City, who have lifted the cup on a number of occasions, are based in Northern Ireland, just on the other side of the border. The reason they play in this cup and not the (northern) Irish Cup, is that they have been part of the Republic of Ireland Football League system since the 1985/86 season. This is not especially unique in itself as you do have Welsh teams playing in the English FA Cup, for instance. 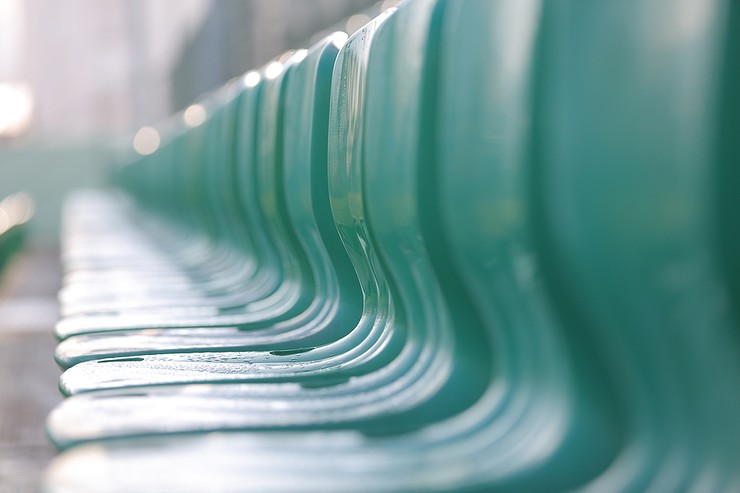 Before the FAI Cup properly begins, there is always a solitary qualification round. This quite small round involves intermediate and junior teams from outside Ireland’s top two divisions. You will find these come from the likes of the Leinster Senior League, Munster Senior League and the Ulster Senior League. There is no direct promotion from these leagues into the Irish second-tier but occasionally the leading sides from here are invited in when space becomes available.

The qualification ties, like most matches in the FAI Cup, are settled on the day so extra time and penalties will be called upon to determine a winner if necessary. A small number of teams who are eligible for the qualification round instead enjoy a bye into the first round of the competition. The exact number will depend on how many fixtures are played but in all cases, there should be 12 teams progressing through the qualification stage. It could be, for example, eight winners and four byes (as it was in 2019) or six winners and six byes (as it was in 2021).

The 12 teams that survive the qualification round, whether through receiving a bye or winning their one-legged match, join the first proper round of the FAI Cup. It is at this stage that all 20 teams from Ireland’s top two divisions jump into the action, meaning a 32-team draw. This is always a nice number for any tournament as it facilitates a simple series of knockout matches leading to a final featuring just two teams.

The First Round, as it is known, features these 32 teams and half of those involved will face elimination at this stage. This leads there to being 16 teams in the second round and this then progresses to the quarter-finals, semi-finals and the final. Most of these knockout matches are one-legged and should the scores be level after 90 minutes, the game will go to extra time followed by penalties. The quarter-finals and semi-finals do differ in this aspect though as any tied matches simply end after 90 minutes and will be replayed at a date in the near future. Rules stipulate that any replay will always take place at the home ground of the side that played away in the original encounter. Only one replay is permitted under FAI Cup rules (per round) so should the two teams end up drawing again, the contest will go to extra time and penalties if required.

In the past, the FAI Cup would feature replays for any tied finals but that rule was abandoned a fair while back. The last final that ended up being replayed was in 1999/00 as Shelbourne drew the initial clash 0-0 with Bohemians. Shelbourne won the next meeting 1-0 but had they not found this winning goal then yet another replay would have been required. Across the 20th century, the FAI Cup final never featured extra time or penalty shootouts, instead it would just use as many replays as needed. In most instances, only one was required but the 1949/50, 1969/70 and 1998/99 finals did all require two replays.

Prior to 1990, all FAI Cup finals, excluding a handful of replays took place at Dalymount Park, the home of Bohemians FC. So, while a completely neutral venue most of the time, some finals have seen Bohemians play at their own ground, even if they did not have the usual proportion of home supporters. For much of the century, it was used for a range of major matches including World Cup qualifiers and Euro qualifiers but back in these times the capacity was much, much larger than it is today.

With Dalymount Park lacking the necessary development work and slashed in size due to safety concerns, it became increasingly unsuitable for big matches. It was at this point that Lansdowne Road stepped in to the host the final, doing so for the first time in 1989/90. Around 29,000 showed up to view the action this year, making it the most well-attended FAI Cup match since 1964. The final continued to feature at Lansdowne Road but not for too long. Between 1996 and 2008, four other stadiums held the final including Tolka Park, RDS, Tallaght Stadium and there was even a brief return at Dalymount Park.

Since 2010 though, all finals have taken place at the Aviva Stadium, Ireland’s showpiece stadium that was built on the site of the old Lansdowne Road ground. Over 36,000 fans saw the brand-new stadium for themselves for the 2010 FAI Cup final but there was a significant dip in attendance after this. Things did pick up after a few years though with the 2018, 2019 and 2021 finals all seeing in excess of 30,000 supporters (the 2020 final was played behind closed doors). Fans have typically got their money’s worth at the Aviva Stadium too as between 2010 and 2021, nine finals headed to extra time and from these, five featured a penalty shootout.

For the team that lifts the FAI Cup, it is first and foremost an additional honour to add to their records. There is also the matter of prize money, of which the winner receives the largest portion compared to any other side. It is not a huge amount of money in the grand scheme of things, and less than some clubs will earn through their league position but it is certainly nothing to be sniffed at.

If this is not incentive enough, winning the cup also provides a spot in the following year’s Europa Conference League qualification stage. Often, the FAI Cup winners end up securing a European spot through their league position anyway but occasionally this does not happen. The most recent example we can supply you with is when Derry City finished fifth in 2012, a full 16 points behind third place. At the time, a cup win granted entry to the Europa League second qualifying round while the teams finishing second and third in the league had to start from the first round.

Whenever the FAI Cup winners end up finishing within the top three, the spare European place always ends up going to the team that finished fourth in the league rather than the cup runners-up.

It is going to take a club a very long time to better Shamrock Rovers’ record in this competition. The Tallaght-based club have lifted the trophy a whopping 25 times (as of 2021) which is 13 more than any other club. Their record in finals is quite intimidating too as they have only lost 10 times at the last stage, giving them a win rate of 71%. Despite their many successes mind you, much of their fanbase will only remember seeing their club lift the cup once. After winning the 1986/87 edition of the tournament, Rovers have suffered something of a drought, only winning it just once since, in 2019. 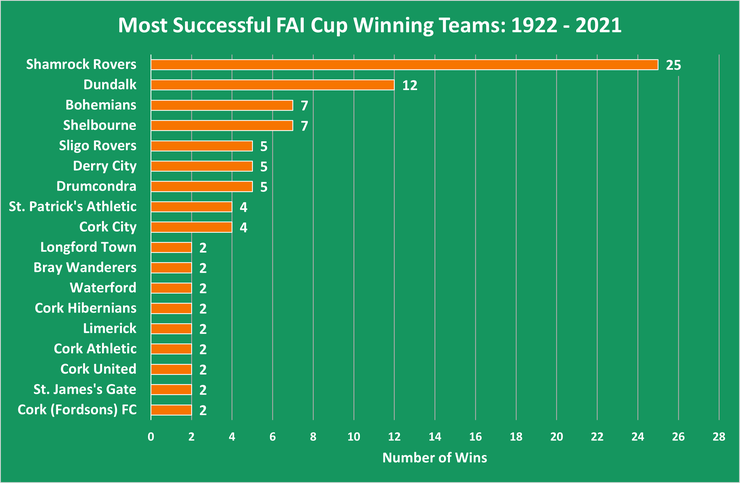 Trailing Shamrock Rovers by a fair way in second place is Dundalk. Their victories in 2015, 2018 and 2020 put their overall tally up to 12. These recent cup wins have helped create some daylight between themselves and both Shelbourne and Bohemians who sit on seven titles each. Shelbourne could easily be a lot higher having reached the final 18 times but they have a fairly poor record when it matters most. This is still better than what Waterford have managed mind you as the Blues have won just two of their nine appearances in the final (22%).

Most beaten finalists have at least enjoyed cup success on another day but there are four teams that have never been better than runners-up: Cork Celtic, Brideville, Dolphin and St Francis. The now-dissolved Cork Celtic are undoubtedly the most unfortunate out of all these, losing all three finals they were involved in (once as Evergreen United) despite forcing a replay across all of them.

The FAI Cup has been on the go since 1921-22 although its 100th birthday celebrations did not go according to plan due to the global health crisis at the time. Nevertheless, whether faced by wars or health crises, the FAI Cup has always found a way to soldier on so there has been a cup winner every year since its foundation. Shortly after its introduction, in 1924, Athlone Town made quite light work of the competition, winning it without conceding a single goal. Only three teams have been able to repeat this impressive accomplishment since: Dundalk (1958), Shamrock Rovers (1968) and Sligo Rovers (2010).

In 1985, the League of Ireland emerged, featuring two top divisions – the Premier Division and the First Division. Premier Division sides dominated the FAI Cup initially but in 1990 Bray Wanderers of the First Division lifted the cup by beating non-league St Francis in the final. While it was Bray who entered the record books thanks to this, St Francis deserve recognition for their huge underdog tale. Seeing a non-league side in the FAI Cup final is scarcely believable anymore so they did exceptionally well to reach the final hurdle. Needless to say, no non-league team has managed the feat since.

Bray are also responsible for another FAI Cup first, although this one is not one to celebrate. In 1999, they become the first side to lift the trophy and face relegation in the same season. This meant that we ended up with an Irish second-tier side playing in the UEFA Cup (now the Europa League) qualification rounds. Rather unsurprisingly, they ended up being thrashed during what was only their second ever European outing, losing 8-0 on aggregate to Swiss outfit Grasshoppers.

Quite a few FAI Cup records have emerged in more recent years and there was a fresh addition in 2020 as Dundalk faced Athlone Town. Due to the global health crisis, that year’s competition was limited in duration meaning Dundalk only had to win two matches to reach the semi-finals, (Athlone won three). It was here they met Athlone, who (despite winning their quarter-finals match 4-1) ended up getting absolutely hammered by their Premier Division opponents. The 11-0 defeat, featuring nine different goalscorers, was the largest FAI Cup scoreline ever recorded in its then 100-year history.