The UEFA Super Cup is a one-off match contested at the start of each season between the current holders of the Champions League and the Europa League.

The Super Cup was first played in 1973 between Ajax and AC Milan over two legs. Milan won 1-0 at the San Siro but Ajax triumphed 6-0 in Amsterdam to lift the first trophy. The Final remained over two legs until 1998 when it switched to a single game at Stade Louis II in Monaco which hosted each contest until 2012. From 2013 the game has been played at different venues across Europe.

Real Madrid, Barcelona and AC Milan have won the most Super Cups with five each, ahead of Liverpool who have won on four occasions.

About the UEFA Super Cup

Unlike most cups that feature numerous rounds and lots of matches, the Super Cup has none of this. Each year the competition includes just two teams who play a solitary match. Being one of the teams involved is very difficult as it requires winning either the Champions League or the Europa League but once there, clubs are only 90 (or 120) minutes away from another trophy. For those familiar with English football, it has similarities to the Community Shield, a one-off match that sees the winner of the FA Cup play the Premier League champions. While this is viewed as little more than a glorified friendly though, the Super Cup is a contest that teams take considerably more seriously.

The Super Cup itself is often the match that begins the season for the clubs involved so it provides a very early opportunity to add a piece of silverware to the trophy cabinet. Teams do not take home the original trophy mind you, only a full-size replica as UEFA retain the original for themselves. Both participating clubs also receive 40 medals each, gold for the winning club and silver for the runner-up.

If this was not all incentive enough, then it should be noted that participation in the Super Cup does pay quite handsomely for just a one-off match. In 2020, the two clubs involved received €8.8m in prize money, with €5m of this going towards the winner. For a club to get its hands on the biggest slice of this quite lucrative pie, they just need to triumph over their opponents by whatever means necessary. If neither can win the match within 90 minutes, the game will enter 30 minutes of extra time. If the scores remain level after this, a penalty shootout will determine the winner following the standard ABAB format.

As for other rules, each Super Cup participants name 23 players, meaning 12 substitutes. Three of these can enter the field of play within 90 minutes while a fourth substitute is permitted should the game head to extra time. Both teams can wear their usual home colours but in the event of a clash, it is the Europa League winners that must pick out an alternate kit. Should a team refuse to play, or find themselves unable to play, then the runner-up of the competition they won can take their place. This virtually never happens but it did in 1993 when Marseille were suspended due to a bribery scandal, subsequently enabling AC Milan to take their spot. 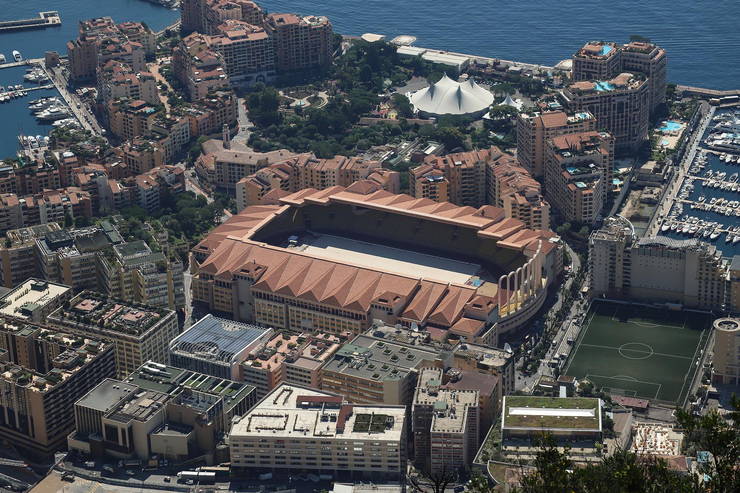 When the Super Cup switched to being a single match at a neutral venue in 1998, the stadium selected for this was the Stade Louise II in Monaco. Unlike Champions League and Europa League finals in which the final moves around the continent each time, the Super Cup stayed in Monaco for 15 consecutive years. The run ended in 2013 when the Eden Arena in Prague took responsibility for hosting the one-off contest. Incidentally, this game produced a nine-goal thriller which still remains the highest-scoring one-legged Super Cup. Since this point, a variety of arenas have welcomed the Super Cup, typically ones unlikely to ever have an accepted bid to host a Champions League or Europa League final.

Up to the time of writing, a total of 24 teams have managed to win the Super Cup, with 11 doing so more than once. Barcelona and Milan sit joint top of the leaderboard having triumphed on five occasions each. In Milan’s case, their achievement saw them handed an original copy of the trophy for them to retain permanently. Barcelona were not treated to the same privilege though as the rules were changed when Milan became the first team to record five wins. 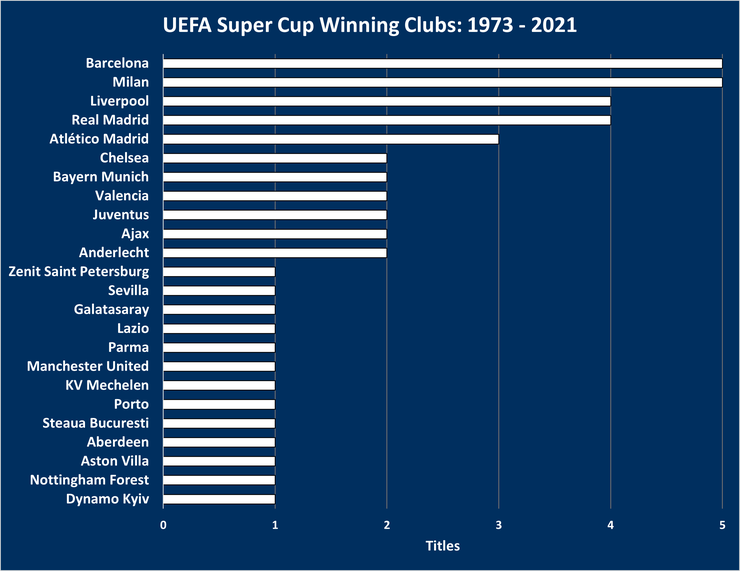 Sevilla have just one title despite featuring in six Super Cups, the joint third-highest amount along with Liverpool. Unlike the Merseyside outfit that have won four and lost two, the Spaniards have suffered defeat on five (consecutive) occasions in this one-off match. This extremely unfortunate record has not stopped Spain from topping the all-time charts mind you. 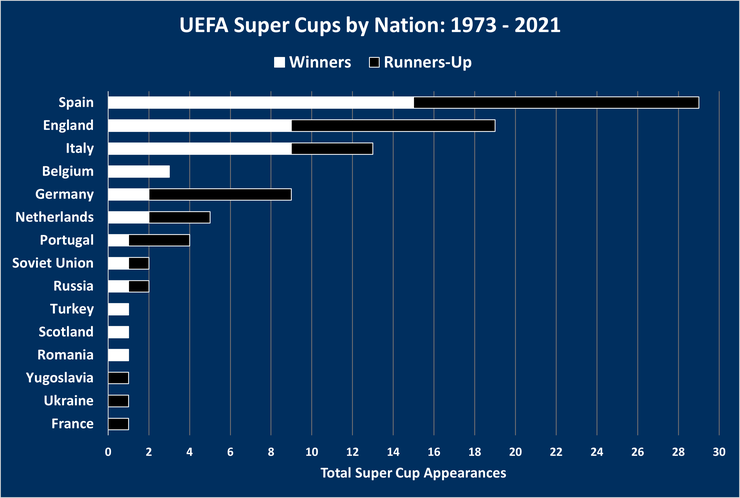 A couple of points to note here. Although part of the Soviet Union at the time, it was Dynamo Kiev of Ukraine that reached the Super Cup on both occasions. As for Yugoslavia’s sole representation, this came courtesy of Red Star Belgrade, based in present-day Serbia.

So far, we have taken a look at Super Cup success based on club and nationality but what about the method of qualification? With the Champions League (formerly the European Cup) being the stronger competition, you would naturally expect winners of it to fare better in the Super Cup. This has proved to be the case too although it is not as one-sided as you might expect. 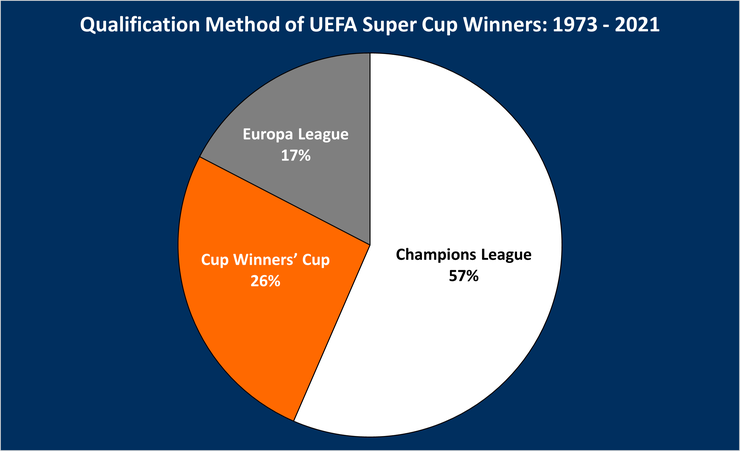 The Cup Winners’ Cup merged with the Europa League (then UEFA Cup) in 1999. As both are considered separate tournaments, their records are not merged.

It may surprise you to know that no player has more than three Super Cup goals to their name. Even though there have been 19 two-legged finals, it has seemingly proven impossible to become a prolific goalscorer in this competition. Of the nine players to reach this three-goal feat, only one stands a chance of improving on his record, with this being none other than Lionel Messi.

Although there are nine players sharing this top-scorer title, the records are not equal. Radamel Falcao remains the only player to have netted a Super Cup hat-trick since it moved to being a one-legged match. Very much at the peak of his powers having scored 36 club goals the previous season, the then Atletico man was instrumental in the 4-1 hammering of Chelsea, for whom he later played. The only other player to score three goals within one Super Cup match was Liverpool’s Terry McDermott. The Englishman was responsible for half of his team’s haul as they crushed Hamburg 6-0 at Anfield (7-1 on aggregate).

If you are wondering where frequent record-smasher and five-time Champions League winner Cristiano Ronaldo is, he has netted two Super Cup goals from 97 minutes of action.

The first man to come up with the idea of a European Super Cup was Anton Witkamp, then a reporter and later an editor at the Dutch paper De Telegraaf. The idea came to him in 1971, shortly after Ajax had lifted the European Cup for the first time while Dutch football was enjoying its heyday. With Ajax looking like a true force to be reckoned with, Witkamp wanted to further test their abilities via a new cup. It would also give a more definitive answer of who the best team in Europe was if the European Cup winner had to face the Cup Winners’ Cup champion.

Witkamp did attempt to get an official endorsement of his idea in 1972 but UEFA president Artemio Franchi initially declined. His reason for doing so was that the European Cup Winners’ Cup champions, Rangers, had been handed a one-year ban by UEFA due to fan misbehaviour. Witkamp was not deterred though and with him backed by the enthusiastic support of Ajax chairman Jaap van Praag, the match went ahead regardless, simply in an unofficial capacity. It was instead billed as a celebratory match for Rangers who had reached their centenary year. For this reason, Ajax’s 6-3 aggregate victory is not recognised by UEFA and does not count to their overall Super Cup tally. It did however help reinforce their status as the best side in Europe. 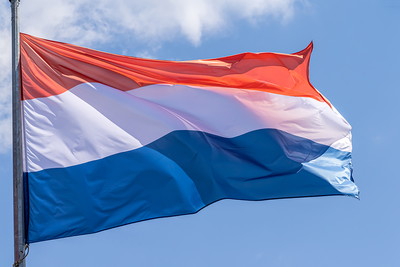 UEFA did begin recognising the Super Cup the following year though so Ajax’s 6-1 win over AC Milan in 1973 is the first edition that had their backing. For many early years, the final took place over two legs with both sides playing one leg at their home ground. The away goals rule was employed to settle scorelines tied on aggregate and failing that then extra time would feature, but this was only required twice (1982 and 1993). There were a few exceptions to this standard format though such as in 1984 when Juventus and Liverpool agreed just to play one match due to fixture congestion. Political circumstances also saw just one leg played in 1986 and 1991.

The Super Cup has run largely continually since being founded but in certain years it has not run at all. This first occurred in 1974 as Bayern Munich and Magdeburg could not find a date that worked for both teams. Seven years later and a similar problem occurred as Liverpool could not find an available time to play Dinamo Tbilisi. Lastly there was the abandonment of the 1985 Super Cup due to the ban on English teams taking part in European competitions. Had this not been implemented then Everton were the team set to take part as they had lifted the Cup Winners’ Cup shortly before. In these times, rules did not permit the competition runners-up (Rapid Vienna) to place in the Super Cup instead.

The 1998/99 season was the last to feature the Cup Winners’ Cup so after this point it was the UEFA Cup (now Europe League) winner that would take on the Champions League victor. One season earlier the Super Cup changed format to a one-legged match played at a neutral stadium (Stade Louis II). For a short period, this one-legged format featured a 30-minute period of golden goal extra time, followed by a penalty shootout if both teams failed to hit the back of the net. Galatasaray are the only team in Super Cup history to win courtesy of the golden goal rule, doing so in 2000. They may well end up being the last too as the rules were altered two years later with a regular period of extra time taking its place prior to penalties.

At this time the Super Cup took place in late August but in 2014 UEFA took made the decision to bring it forward a couple of weeks so it would take place in mid-August. This was made possible as FIFA removed this slot as being a friendly date in the International Match Calendar. Although this mid-August date has stuck since, global circumstances did force the 2020 Super Cup to take place in September and in a different stadium than initially scheduled.

The creation of a third European competition, the Europa Conference League, in 2021 had no bearing on the Super Cup as it continued to be contested purely between the Europa League and Champions League winners. There are currently no plans to create some sort of min three-way tournament including all three European champions. This may change in future but such a move poses scheduling issues and may hurt the reputation of the Super Cup.