After Lee Westwood’s mightily impressive win in Abu Dhabi he headed straight to Dubai for the celebrations. As anybody who follows Westwood on social media can testify, he very much enjoyed himself on Sunday before getting straight back to work ahead of this week’s Omega Dubai Desert Classic.

Once again, Westwood is part of a very strong field in the desert. This is one of the strongest events on the European Tour schedule and will feature many of the tour’s leading lights. Sergio Garcia is one of the big names making the short trip from Abu Dhabi. He does so after a strong showing and is ready to kick on to win in Dubai at 20/1 with BetVictor.

The Majlis Course at Emirates Golf Club is, in many ways, a classic example of a desert golf course. That means that it usually plays tougher in the afternoon compared to the morning as the winds tend to get up during the day.

Like last week’s venue, the Majlis Course is exposed to the elements so any increase in wind will be keenly felt. Players must take wind direction into account off the tee as this is a strategic golf course. It is important to set up approach shots that are as straightforward as possible as hitting a high number of greens in regulation has always been the key statistic in the Dubai Desert Classic.

Just like the Dubai skyline, the Majlis Course is in a state of near constant change. The event organisers like to tinker with the layout to make it more challenging but the one thing that never changes is how well it is presented. These are arguably the best greens on the European Tour which engender confidence in even the more shaky putters.

The one thing that most former winners of the Dubai Desert Classic have in common is previous good form around the Majlis Course. Haotong Li is the only player in the list below who arrived in Dubai without a prior top 20 finish to his name. The Chinese star was able to make up for his relative lack of experience thanks to his excellent long game and ability to play well in the wind.

The severity of the wind always plays a major role in this tournament. The conditions for this year’s event suggest that scoring won’t be particularly tough but that there will be more than enough wind to keep the players honest. That suggests that the 2020 Omega Dubai Desert Classic will go the way of a top quality ball striker rather than a top class putter as the latter group tend to thrive when scoring is lower.

What players do off the tee is far from important at the Majlis Course providing players avoid the worst of the desert that frames many of the fairways. This is a second shot golf course where those who are able to relentlessly hit greens in regulation will give themselves the chance to climb the leaderboard.

There is so much talk about the incredible amount of younger talent breaking through in the top level of professional golf that it was refreshing to see 46 year old Westwood get over the line. He’s been an inspiration to several generations of golfers during his career and is now inspiring those of a similar age.

Sergio Garcia has six years on Westwood but as he’s recently turned 40 it’s likely he’ll be thinking about what happens as he approaches the autumn of his career. Garcia showed that he remains highly capable of competing with the best in the game with his play in Abu Dhabi last week. He could have easily improved upon an eighth place finish were it not for a couple of mistakes and Garcia will be feeling very good about his game as he returns to Abu Dhabi.

The 2017 Dubai Desert Classic champion loves playing in the desert and has more than enough experience of playing in the wind to cope even with the worst of the conditions this week. Garcia will go down in history as one of the best ball strikers in the history of golf and can use that ability with his irons and wedges to set up enough chances to win this title again.

Bernd Wiesberger was supported here to go well in Abu Dhabi and he would have returned nicely from an each way bet were it not for a very poor final day. The Austrian was disappointed he couldn’t kick on to challenge Westwood but remains very happy with the general state of his game.

Wiesberger is certainly in a much better state than 12 months ago. His missed cut at the Majlis Course in 2019 can be put down to the form and fitness issues he was dealing with at the time and punters should know that he’s in a very different place now. Wiesberger has the ball striking ability and the confidence with his putter to rack up a large number of birdies this week, keep the bogeys at bay and he should challenge at 25/1 with bet365.

Sergio Garcia is an excellent proponent of desert golf. He’s played well in many of the big tournaments held in the Middle East including the Dubai Desert Classic which he won just three years ago. After an encouraging return to action last year, Garcia looks primed to kick on and follow the Rory McIlroy, Stephen Gallacher, Tiger Woods and Ernie Els in becoming a multiple champion at the Majlis Course so back him at 20/1 with BetVictor.

About the Omega Dubai Desert Classic

Those involved in professional golf have been talking for a long time about the prospect of a global tour, one which combines the PGA Tour and European Tour. The latter tour has been a de facto global tour for many years now, hosting tournaments in far flung corners of the globe for over 30 years.

The Middle East is an incredibly important part of the world for the European Tour with the Saudi International becoming the sixth tournament held in the area in 2019. Dubai has long been a trendsetter in the Middle East when it comes to the worlds of tourism, transport and entertainment. It is fitting then that it was the first place in the Middle East to host a European Tour event in 1989 when the inaugural edition of the Omega Dubai Desert Classic took place.

The tournament, much like the Dubai skyline which provides the backdrop for the Majlis Course at Emirates Golf Club, has developed incredibly over the years. It regularly plays host to some of the biggest names in the sport (thanks in no small part to a healthy appearance fee budget used for PGA Tour stars) and has a prize fund worth in excess of $3 million.

As befitting Dubai’s reputation as a global hub, the Dubai Desert Classic has always been a tournament with a distinctly international feel. That much was clear right from the start in 1989 when the tournament then called the Karl Litten Desert Classic was won by the Englishman: Mark James.

James’s win started a run of four tournaments in a row which were won by golfers from different countries: Eammon Darcy from Ireland in 1990, Seve Ballesteros from Spain in 1992 and Wayne Westner from South Africa in 1993. South Africa became the first nation to have two Dubai Desert Classic winners when Ernie Els romped to victory by six strokes in 1994. Els subsequently became the first player to win the event twice in 2002 before winning again in 2005. However, even Els who loves this event could not match Stephen Gallacher’s feat of winning back to back tournaments, something the Scot managed in 2013 and 2014.

Spain were the second country to register multiple winners of the Dubai Desert Classic in 1998 when Jose Maria Olazabal won and they have since gone on to be the most successful nation in the history of the tournament with six winners compared to the USA’s five and South Africa’s four as of 2020. 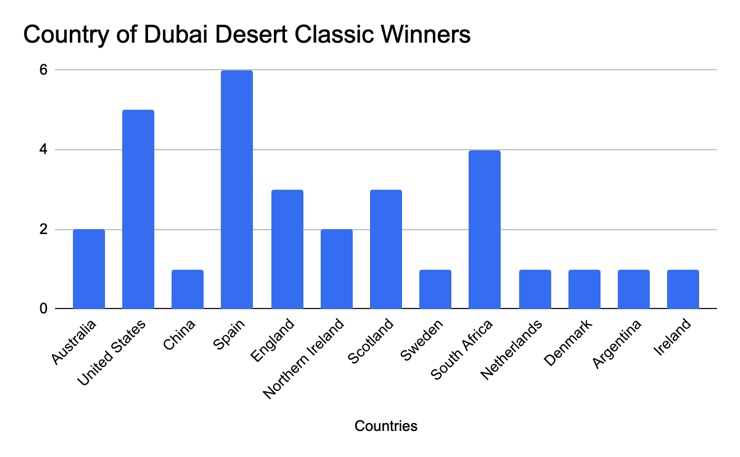 On the face of it, there isn’t much to link the Omega Dubai Desert Classic with the Masters. There is, however, one link that every player who has yet to be fitted for one of those famous green jackets at Augusta National knows very well, namely that victory in Dubai preceded a first Masters success for both Danny Willett and Sergio Garcia.

Willett managed to hold off a spirited challenge from both Rafael Cabrera-Bello and Andy Sullivan at Emirates Golf Club in 2015 before taking advantage of Jordan Spieth’s infamous meltdown to win the Masters four months later. One year on and it was Garcia who followed up victory in the Dubai Desert Classic with his first Masters win, where he memorably came through an incredible dual with Justin Rose.

The form between the two tournaments holds up to closer scrutiny. For example, Rory McIlroy’s best ever finish at Augusta came in 2015, just months after he won the Dubai Desert Classic for the second time. Other players have followed up a strong showing at Emirates Golf Club in January with another good performance at Augusta in April even if they were unable to win.