The Genesis Invitational may not be the start of the golfing season but there is a feeling that it is where the season really gets serious as we head into the spring before the first of the Majors.

This tournament became an Invitational in 2020, with the field limited to 120 players. The other Invitationals on the PGA Tour are the Arnold Palmer, RBC Heritage, the Charles Schwab and the Memorial.

Riviera Country Club first hosted this event back in 1929 when it was known as the Los Angeles Open. It shared hosting duties over the years and decades that followed before taking over as the sole host in 1999.

Riviera Country Club is an excellent example of a classical golf course. The relatively narrow fairways are framed by trees, players must carefully set up their approach shots into the greens and the bunkers are deep enough to be genuinely hazardous.

Riviera is a long way from the sort of wide, expansive courses that we see so often on the PGA Tour with the change in pace one of the reasons that so many world class players ring the Genesis Open in their diaries at the start of every season. The history and prestige of the course is also a significant pull factor. Riviera has hosted three major championships and has form lines that tie up well with other major venues such as Augusta National.

Although intimidating off the tee with trees ready to punish errant tee shots, Riviera actually tends to favour the longer hitters. Recent editions of the tournament were won by Adam Scott, J. B. Holmes, Bubba Watson (twice) and Dustin Johnson and it is the big hitters who usually head the betting.

That said, a Tom Fazio-led redesign in 2008 helped future-proof Riviera in that it cannot simply be overpowered. Dog-legs, bunkers and those trees all make it important for players to set up their approach shots whilst what a player does on the greens can make or break their week.

About the Genesis Invitational

The history of the PGA Tour is full of events which started off as local golf tournaments and grew to become major, internationally renowned events. The Genesis Invitational is one such tournament with a history that begins in 1926 when it was called the Los Angeles Open.

The tournament has gone by many different names since that inaugural event. Currently, it is sponsored by Genesis Motors who provide a lot of money for what is one of the richest events on the PGA Tour. As of 2020, it is also one of the few tournaments given invitational status.

Nissan and Northern Trust are the two companies to have sponsored the Los Angeles Open before Genesis took over in 2017. The event has also been held at a large number of local courses but is best known for its long association with Riviera Country Club.

As you might expect from a top class golf course in Los Angeles, Riviera is incredibly exclusive with a membership drawn up from the great and the good of LA. It’s also a very challenging test of golf which has been able to keep pace with modern golfers despite it being a classical layout.

A Special Event for Tiger

It’s always special for a golfer to return to the site of a former triumph. That’s particularly true of the Genesis Invitational which has produced a number of multiple champions (as outlined in the table below). 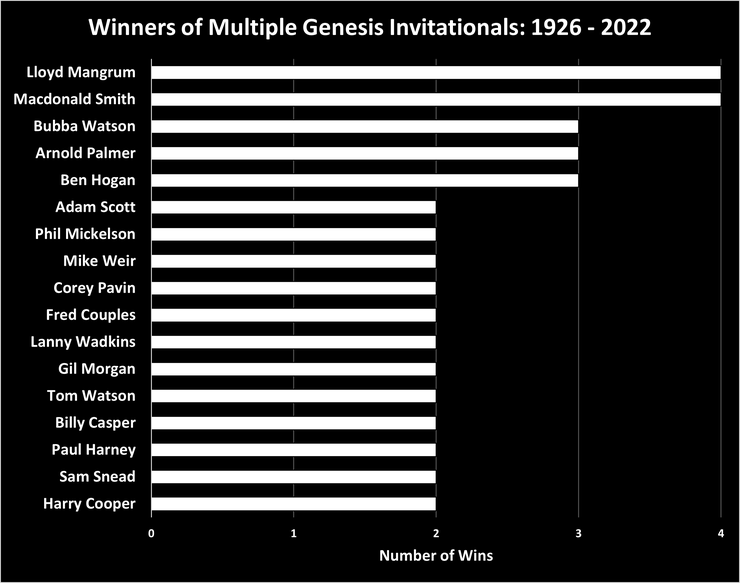 This is also a very special event for Tiger Woods despite the fact that two runners-up finishes in 1998 (at Valencia Country Club) and 1999 is the closest he’s come to lifting the trophy. That’s because Riviera was the site of Woods’ first ever appearance on the PGA Tour back in 1992.

It was obvious even at that incredibly early stage that Woods was something special – the PGA Tour does not regularly hand out places in the field to 16 year olds – but nobody could have imagined that Woods would go on to change the face of the sport in the way he has.

Woods has earned an eye-watering amount of money since that debut but he has equally raised a huge amount for charity through his Tiger Woods Foundation. He hosts the Genesis Invitational through his foundation and is still very keen to add the tournament to his long, long list of wins.

Anybody who has watched much golf on Sky Sports will know that Rich Beem is something of a character. ‘Beemer’ as he is affectionately called, is best known for holding off the challenge of Tiger Woods to win the 2002 PGA Championship but British golf fans have got to know him for his relaxed, humorous approach to the sport.

That humour was on full display in the 2007 Nissan Open. Beem was in the shakeup at the top of the leaderboard on Saturday thanks to a very good round of golf which turned into a great one on the 14th tee. Beem required a mid-iron club to reach the pin on the par three which can stretch to almost 200 yards, but he was obviously feeling confident as he took dead aim at the flag and was rewarded with a hole in one.

Quick as a flash, Beem raised his arms in celebration, threw his club into the air and climbed onto the roof of the brand new Nissan Altima – the prize for a hole in one – which sat behind the tee. His reaction of pure joy was replayed around the world and eventually was turned into a television commercial by Nissan who ran with the strapline, “nothing compares to owning a Nissan.”