Traditionally, the Scottish Open is the final tournament before the Open Championship. Following on from the Irish Open, this is ordinarily the last chance the world’s best golfers have of honing their skills before tackling the oldest and arguably most prestigious of the four majors.

This isn’t the case in 2020, with the Open postponed and both the Irish and Scottish Opens switched to the Autumn. That said, the Scottish Open remains one of the highest quality tournaments taking place on these shores.

First played in 1972 at Downfield Golf Club, the Scottish Open has been hosted by numerous courses over the years including St Andrews, Gleneagles, Carnoustie and Loch Lomond.

Since 2017, the Scottish Open has been part of the European Tour’s Rolex Series of elite tournaments, bringing with it a boost in prize money to £7 million.

The Scottish Open was hosted by Loch Lomond Golf Club for years. Financial difficulties led to a move away from that storied venue and whilst that was a disappointment for many, the move gave the Scottish Open a new lease of life. From then on, the tournament has always been held at a links golf course to help the strong fields assembled every year get their games ready for the Open Championship.

The tournament remains at a links course, although some purists would argue that point when it comes to The Renaissance Club. The course is based on hallowed ground for golfing enthusiasts, features all of the typical challenges you’d expect of a links golf course but it is a modern layout built to look, feel and play like a links compared to the more ‘natural’ links courses which are its neighbours on the east coast of Scotland.

Whatever your feelings about the nature of The Renaissance, there is no doubt that it is up to the challenge of hosting the Scottish Open. It also has hosted both the 2019 and 2020 Ladies Scottish Opens so is up to the task of challenging some of the world’s best golfers.

A certain amount of links pedigree is a necessity to score well on the par 71 which can be stretched out to 7,343 yards. The damp conditions in North Berwick will mean that some elements of links golf such as running the ball up the fairways onto the greens won’t be as prevalent but an ability to play well in the wind and out of challenging bunkers will be required.

About the Scottish Open

The Scottish Open, which is currently being sponsored by Aberdeen Standard Investments, is one of the European Tour’s most prestigious events and, as of the 2020 season, one of eight tournaments that are part of the highly lucrative (we think a purse of $7m qualifies as highly lucrative!) Rolex Series.

Over the years, the tournament has been played at various courses across Scotland, including Gleneagles, Loch Lomond, Carnoustie and Castle Stuart. Since its first staging, the Scottish Open has had various sponsors and different names but has always remained a huge event.

The Scottish Open has been a Rolex Series event since 2017 and has been part of the Open Qualifying Series since it started in 2014. This tournament gives players one last chance to qualify for The Open (alongside the concurrent John Deere Classic in the States), whilst for those already eligible it is the perfect links course preparation, being typically scheduled for the week before the oldest major. At the time of writing, the latest Scottish Open took place at Renaissance Club in North Berwick in 2019 and Austrian Bernd Wiesberger prevailed in that one.

You’ll Need to Go Low to Win in Scotland

Despite the Scottish Open only starting in 1972, it has grown into an important competition on the European Tour calendar. We have been treated to plenty of thrills and spills in this prestigious event in Scotland throughout the years. In more recent times a really low score has been needed to prevail in this one, partly due to the ability of modern players to overpower the old links courses, especially if the weather is benign. 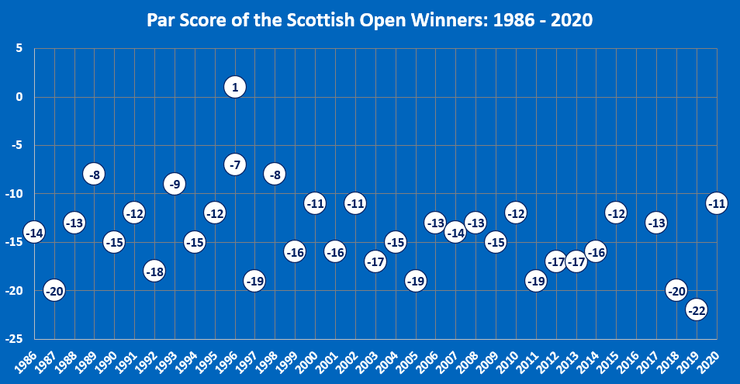 Not since 1998 has a score single-digits under par been enough to land this event. Lee Westwood won that year with a total of -8 at Loch Lomond, although a year earlier Tom Lehman was 19 under for his four rounds at the same course. In 2019 -22 was only good enough for a play-off, with Brandon Stone shooting -20 to win in 2018. Indeed, the average winning score between 1999 and 2019 inclusive was an incredible -15.33 under par. You’re going to need a hot putter to win the Scottish Open.

Nowadays, the Scottish Open plays a vital role on the European Tour, but that has not always been the case. The first two editions of this event, in 1972 and 1973, were both broadcast on live TV in the UK but then the Scottish Open went into hibernation. In fact, from 1974 to 1985, no tournament even took place, which is why 1986 will always be an important year for the this championship.

The Scottish Open made a very welcome return in ’86, replacing the Glasgow Open, which had been running from 1983 to 1985. The tournament had one year at Haggs Castle Golf Club before making the move to Gleneagles until 1994 while then being known as the Bell’s Scottish Open.

The Scottish Open has thrown up several memorable moments since Neil Coles won the first event at Downfield in Dundee back in 1972. We had Gordon Sherry’s magic moment in the spotlight in 1995 (he finished fourth as an amateur), and Justin Rose’s heroics in 2014, but Colin Montgomerie’s famous victory at Loch Lomond in 1999 really stands out.

Montgomerie is without doubt one of the most successful and popular British golfers of all time. The Glasgow-born ace won a vast number of European Tour events, but his victory at Loch Lomond in 1999 will go down as one of the Scottish star’s most pleasing wins of his illustrious career.

‘Monty’ trailed superb Spaniard Sergio Garcia by seven shots, but he was not to be denied on home turf, going on to finish three shots clear of the field to lift the trophy. Montgomerie went on to win the Order of Merit at the end of the season.

Plenty of players from the UK have prevailed in this tournament over the years. However, Montgomerie remains the only Scot to have won any version of the Scottish Open, adding even further prestige to that famous win. As we can see from the list below, Woosnam’s three victories make him the most successful Brit in this tournament and, indeed, no player from anywhere else in the world can match Woosie’s hat-trick of Scottish Open triumphs. 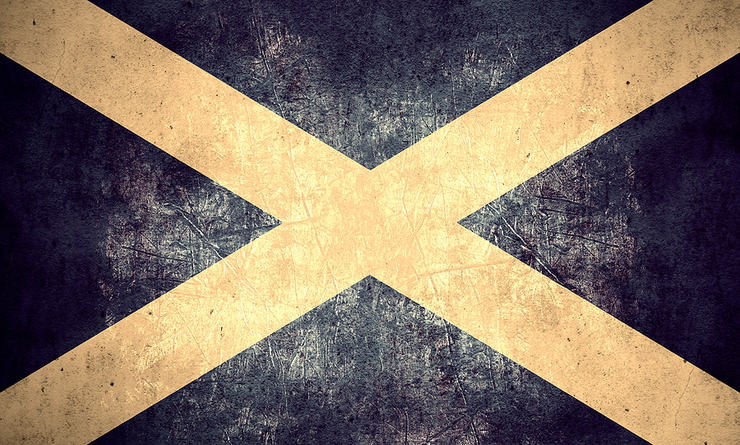 Whilst most people accept 1972 as the first edition of the Scottish Open, some golfing historians claim that the inaugural tournament dates way back to 1935. Indeed, the Glasgow Herald from that year reported on a “New Scottish Open Championship being played at Gleneagles.

This was a non-R&A event and golf’s governing body objected to it being called a “Championship”. Despite ongoing wrangling it was held again the following year but ultimately the R&A got their way and that was that for the Scottish Open until almost 40 years later. At least it was worth the wait!