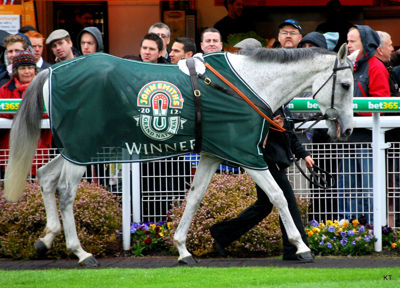 The Grand National at Aintree in Liverpool is perhaps the biggest and most famous horse race in the world. It attracts a global TV audience of around 500m and provides around nine minutes of thrilling entertainment and it is a spectacle like no other.

The huge field, the 30 fences (that remain testing despite modifications to improve safety), mammoth distance of more than four miles and two furlongs, and the often tricky going means that this race is perhaps harder to win than any other. Throw in a sapping and seemingly never ending run-in of almost 500 yards and it is clear that it takes a very special horse to triumph in this contest.

It is the most lucrative jumps race in Europe, with winning connections in 2019 taking home more than £560,000. This attracts a high class field and with 40 horses typically going to post, picking the winner is almost as tricky as actually winning the race. The first horse to ever claim glory in this uniquely gruelling contest was named Lottery and many feel that is hugely apposite given the seemingly random nature of predicting the winner.

Quick Answer: Yes, seven horses have won more than once. Six of the horses have won twice with the infamous Red Rum winning it three times. Tiger Roll won in 2018 and 2019 and is still running so it is possible he could match (or beat) Red Rum’s record. 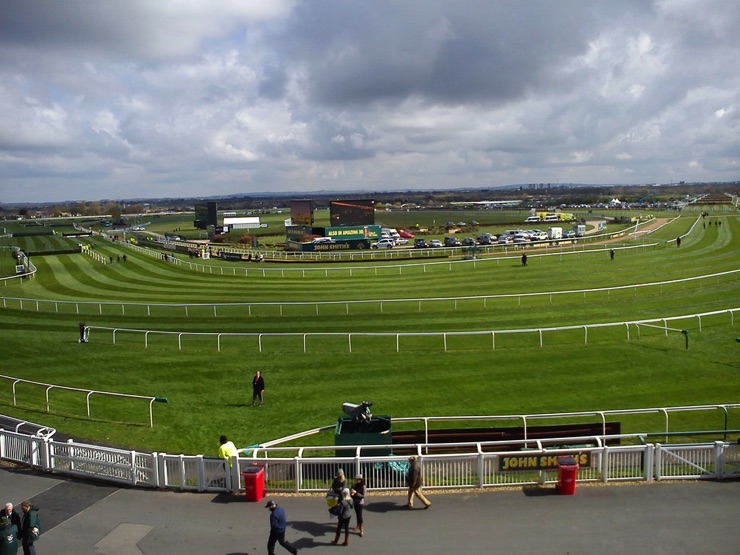 Well, to answer the titular question of this article quite simply: yes, there are horses that have tasted victory in Aintree’s showpiece more than once. Before we list all of the official multiple winners, it is worth noting that whilst Lottery is the first horse to win the Grand National proper, in 1839, there were races that took place prior to that which held, for a time at least, the same moniker.

Anyway, the reason we are talking about this confusing nomenclature is that before Lottery wrote his name in the National’s record books, we arguably had our first two-time winner of the race. The Duke won in 1836 and 1837, ridden by a certain Martin William Becher, Becher being both instrumental in establishing the race and also subsequently having one of its most famous obstacles named in his honour (Becher’s Brook, obstacle six and 22 in the current National layout).

Whether we choose to count The Duke or not, there are a number of other horses who have officially won the Grand National more than once:

So, as we can see, there have been seven horses, excluding The Duke, who have managed to defy the odds to win this incredibly difficult race more than once. Let’s look a little more closely at some of their stories. 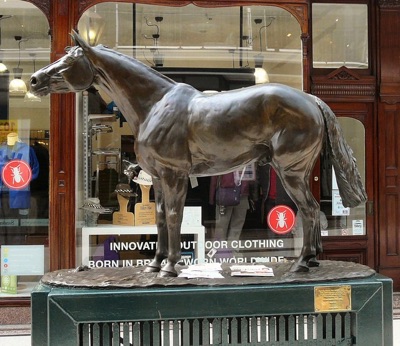 Red Rum is undoubtedly the greatest horse in the history of the Grand National and that isn’t just because he is the only horse to win it three times. Red Rum was a horse the public adored and he was trained by Ginger McCain, one of the truly great trainers in National Hunt history, who also saddled Amberleigh House, the 2004 winner. Red Rum’s victories really captured the public’s imagination and his enduring success in this race made fans come to view him almost like part of the family.

Many of Red Rum’s career stats are hard to believe and one of the most impressive is the fact that he never fell in 100 races. The fact he even contested 100 races is mightily impressive, especially considering the gruelling contests in which he typically took part. But there is no escaping the fact that it was his performances in the Grand National that really make him stand out and not just his record three victories. His full record in the world’s greatest steeplechase reads:

If the Grand National is a lottery then Red Rum must have been the luckiest horse to ever stride around a racecourse. Of course, the alternative view is that a horse with three wins and two seconds to his name in this particular race is quite simply the greatest Grand National horse we have ever seen and that we are likely to ever see.

Many consider his coming-from-behind victory in 1973 as one of the greatest performances ever in the race. His third win, when the public more or less willed him over the line, was voted the 22nd best sporting moment in UK history in 2002 (although some would question the merit of a poll that voted beating Germany 5-1 in a World Cup qualifying game ahead of beating them in a World Cup final!). 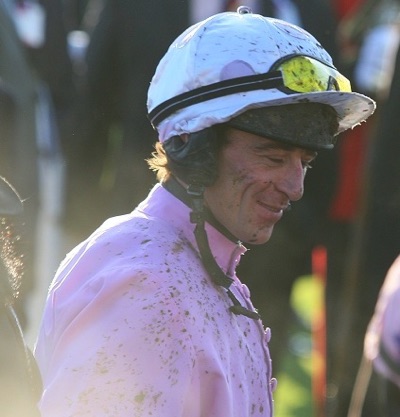 The obvious horse to look at next is Tiger Roll, winner of the Grand National in 2019 and 2018 and bidding for the hat-trick in 2020. No horse has ever won three in a row but this mightily impressive Irish gelding is a clear favourite in the ante post betting.

A son of Authorised, he is well bred and with Gordon Elliott training him for Gigginstown House Stud, and Davy Russell his jockey for the Grand National, he has everything in his favour. Well, almost everything. Tiger Roll was given joint top weight for the 2020 race and owner Michael O’Leary had previously stated that he was very unlikely to enter his horse if the handicapper treated him in such a way.

Tiger Roll is a marvellous horse but the 2020 Grand National is going to be one of the classiest ever, with BHA handicapper Martin Greenwood saying: “

The race is full of top-class individuals and boasts the winners of races such as the Grand National, Irish National, Welsh National, Rowland Meyrick Chase, Cheltenham Gold Cup and much more. It is as good a staying handicap as would be run anywhere. You could argue that it is the highest quality Grand National in modern history.

In November, prior to the weights being announced, O’Leary said, “I know it makes for a great story, that it would be wonderful if he won three Grand Nationals in a row, but wouldn’t it be terrible if he died lumping a huge weight around Aintree? I care more about looking after the horse and I am not killing him. I’m not soft and accept it happens, but I have a wife and children who are in love with this horse and I am not risking him to lump a humongous weight.”

The current plan is for the 10 year old to head to the Cheltenham Festival to try and win the Cross Country Chase, just as he did in 2018 and 2019. O’Leary initially said that he may well retire if he completes that particular hat-trick but Tiger Roll is just so impressive that the pull of going for the Aintree hat-trick was always likely to prove too strong.

That seems to be the case now, with Michael’s brother Eddie O’Leary recently saying, “We still feel he’s on a very unfair handicap mark but so be it. It’s unfair to deny him a chance to go for history. If he comes through Navan and Cheltenham and all’s well, then we’ll run.” He finished a very solid fifth at Navan following a 316 day break, so on to the Festival he heads!

The way in which Tiger Roll has won many of his races suggests he could well land the hat-trick. He seemed to float round both Cheltenham and Aintree and never at any stage looked in danger of either clipping a fence, getting into trouble or coming into contact with another horse. That’s a remarkable feat given the nature of the Cross Country and the National and, in common with Red Rum, Tiger Roll has never fallen.

No matter what happens in April 2020, Tiger Roll’s place in Grand National history is assured. He won at 10/1 in 2018 and as the stonking 4/1 favourite last year. Currently priced at around the 5/1 mark, despite the 11-10 weight he’ll be saddled with, he may well be backed in to 4/1. Can he thrill punters once again and make history? Time will tell… 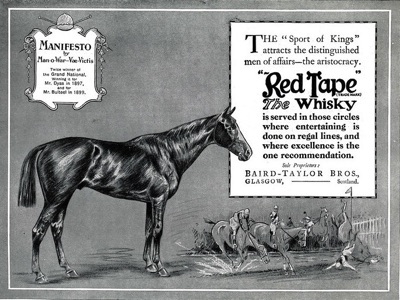 Manifesto landed the Grand National in 1897 and 1899 so it is safe to say that nobody alive today has seen him race. There are very few beyond hard core racing fans who would have ever even heard of him but this dual winner is well worth a closer look.

Things didn’t start too well for the attractive bay as he fell in his first race in 1892 but he made steady improvements and as a seven year old entered the 1895 Grand National. He finished a very credible fourth, behind winner Wild Man Of Borneo, but didn’t fair quite as well 12 months on when falling at the very first race.

Undeterred, connections changed trainer and sent him to the 1897 race where he was sent off with 11-3 on his back but as the 6/1 favourite. He delivered the goods, beating Filbert by a huge 20 lengths to land his first Grand National.

A year later injury forced him to miss the chance to defend his crown but in 1899, despite giving at least a whole stone to the entire field, he won once again. That victory was a remarkable achievement and, with 12 and a half stone to lump around Aintree, arguably is up there with anything Red Rum, or any other horse, managed in this unique race. Sent off at 5/1 he won by a commanding five lengths despite some hairy moments along the way.

The new millennium saw Manifesto return to Aintree, once again carrying top weight as he bid to become the first ever horse to win the race thrice. At the age of 12 his burden proved too much but he finished third, with just Barsac and winner Ambush II ahead of him.

He missed the race the next year but came back in 1902 at the age of 14, once again carrying a huge weight. Once again he defied that and his advancing years to finish third, an achievement even more impressive considering the heavy ground and the two and a half stones conceded to winner Shannon Lass.

Do you think this section on Manifesto is ever going to end? Like the horse, it keeps going. He finished third yet again in 1903 and, amazingly, returned in 1904 at the ripe old age of 16. Once again he was forced to carry more than 12 stone, which seems strange, but he got round and finished eighth in his last ever Grand National.

His record of eight Grand Nationals is one that may never be bettered, with two wins, three thirds and a fourth also an incredible achievement. Red Rum and, if he lands the hat-trick, Tiger Roll, are likely to be the horses most remembered, but Manifesto may well be the best of them all.