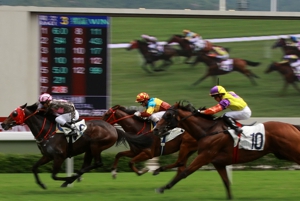 Totepool betting is different to fixed odds betting that most bookmakers offer. Rather than offering a set price on a given horse, the amount won is determined by the total amount staked on the race and on the particular horse that wins. This method of betting is called parimutuel betting and was originally started in France at the end of the 19th century. It is now viewed as slightly old-fashioned but remains popular in France and to a lesser extent North America and Australia.

Whatever money is taken on a race is subject to the bookmaker’s cut and other fees and taxes, with the remainder divided out among the winners according to how much they bet on the horse. This effectively means you always get the SP (Starting Price) on a horse and don’t know the exact odds you will be paid until the race is run.

In the UK Totesport – now owned by Betfred – are the only company that can offer this form of wagering. Tote was established way back in the 1920s following the 1928 Racecourse Betting Act, originally as a government appointed board (created by Winston Churchill no less!). In the 1960s, this became the Horserace Totalisator Board – the Tote, taking its name from the machine created in America used to calculate the odds of such bets.

Many people argue that Totepool betting offers lower odds but on the whole they are broadly the same as you would find at a standard bookie. On occasion – depending on how many people back the winning horse – you may find you can get higher odds at the Totepool and this, along with the simplicity of the betting, whereby you just tick a horse number and a stake, are what appeal to some people.

However, the major draw of Totepool betting is not the standard “to win” or “to place” bets, but the large jackpot prizes offered by the Tote Scoop 6 and the Tote Jackpot. These bets can now be placed through bookmakers other than Tote, having been syndicated out, and function a little like a lottery – certainly in terms of the prizes on offer. The Scoop 6 is run every Saturday and requires you to pick the winners of six named races, usually ones being televised.

Just as with the lottery, these prizes can rollover and the biggest win to date is a whopping £3.5 million won back in 2009. The average win – including the bonus the following week that winners are eligible for – is a very tasty £279,218 and given you can perm your selections – that is pick multiple horses in each race to increase your chances – you could be in line for a massive win.

The Tote Jackpot is similar but entry is £1 rather than the £2 for Scoop 6 and the prize is on offer for the first six races at whichever meeting is the Jackpot meeting that day. Again, rollovers are common and the highest prize won on a Tote Jackpot is just under £3m in 2011 at Newmarket.

As Totepool betting works via the form of a pool bet, the dividends are essentially the returns that you get for your bet. But, unlike betting with more traditional based bookmakers, the dividend that you receive can’t be calculated until the race has finished and all bets have been taken.

In order to best utilise Totepool, it’s key to try and find bets that might have a fairly small number of punters betting on the same bet. This could be a horse that isn’t one of the favourites or even a long-priced no-hoper, if you’d rather. This is because as the more punters back the horse, the smaller your dividend becomes.

Let’s run through a quick example of how a bet is formed with the Tote and how your dividends are calculated. When forming your bet, the race card is going to look a lot different to the majority of race cards. Here you will simply see the horse number for that race and sometimes they will include the name of the horse, but not always, so it’s often up to you to work out which horse that is.

The next step is place your stake on your horse number. For this example, let’s say we place a £10 bet on Horse number 1. After the race has run, the Tote then add up how much money has been placed on each individual horse.

The favourite is based on the horse that has taken the most money. The cumulative amount of money that has been taken for the race will now be trimmed by the Tote’s cut, which they take of every race as their “fee”. This could be as much as 10% for some races.

Below we have included a typical results card that highlights both the starting price of the winning horse and the Tote Win price. What this also shows is that if you were to have placed your bet on the Tote for this race then you would have got better odds than backing the starting price by 40p per £1 staked. 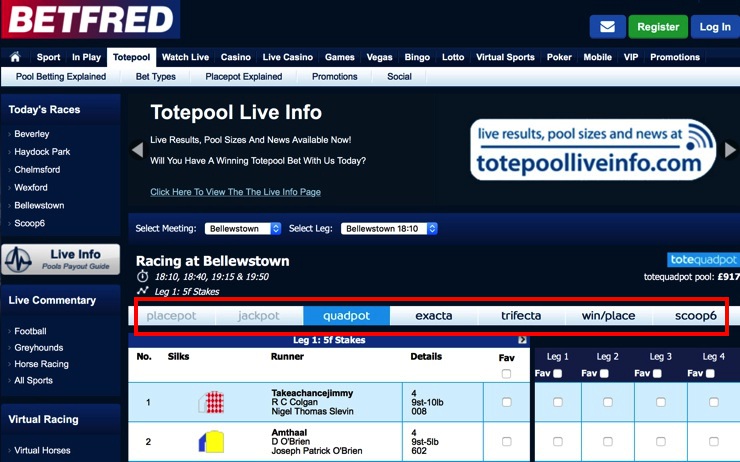 As the Tote continues to expand, the number of different types that are on offer has increased to meet demand. These are the Totepool bet types:

Betting on the Tote place is not too dissimilar to that of each way betting, but for this your whole stake is going on the horse to place, rather than to win. It’s worth noting that the number of placed paid will be determined on the number of horses in the race. As the race increase in size, the number of places will also increase. You won’t get extra money for your horse winning as it will simply go down as a place finish.

The Tote Exacta works in the same was as traditional forecast bet would work. For this, you need to choose two horse in the race to finish both 1st and 2nd.  You will be required to highlight the finishing position of each horse and in the correct order. An extension of this bet is the Exacta combination bet. This is where you choose two horses, but they can finish in either 1st or 2nd place. The odds will decrease quite a lot over that of the traditional Exacta bet.

This market works the same as the Tricast bet with traditional bookies but is often more readily available with smaller field races than the Tricast.

The Quadpot allows you to select a single horse from 4 races within a single meeting to finish within the place spots for that race. The races are usually made up of the final four races for each meeting and the places will be determined based on the number of runners for that race.

The Placepot extends the Quadpot in that for this you need to choose a horse in each of the 6 race within a meeting for a successful bet. It’s worth noting that in a Placepot you are able to select up to 3 horses if you wish for each race, giving you a better chance of success. But, as you add in more selections, the overall odds for your bet will decrease. For maximum winnings you will need to choose just 1 horse.

The jackpot is one of the most popular Tote bets and for this you need to select the wining horse in each of the 6 races from a single meeting. The “jackpot” comes in to play as given the difficulty of this, if no winner is found, then the money rolls over to the next jackpot meeting. It’s also worth noting that not all meetings are eligible for this bet, so it’s worth checking up prior to placing your bet.

Finally, the Scoop6 is another of the more popular bets and is essentially the same as the jackpot bet above in that you need to select 6 winners from 6 races within a single meeting. The difference is that this bet is only targeted towards the bigger meetings throughout the year and comes with a larger minimum bet of £2, compared with a minimum bet of just 50p from the Jackpot bet.

When Betfred acquired the Tote in 2011 for £265 million, part of their deal included exclusivity amongst UK and Irish racetracks to offer pool betting. This license was set to expire in 2018, but in a turn of events, many racetracks have refused the new deal laid on the table from Betfred and instead decided to implement their own pool betting company, Britbet.

The fall out of this has been pretty significant and Fred Done, owner of both Betfred and the Tote has indicated that he would pull all of his on-course bookmakers from some 50 tracks across the UK whilst also removing all sponsorship deals in place for any races or tracks meetings.

Whilst the majority of racetracks are backing the new Britbet deal, the likes of Ascot and Chelmsford, have decided against backing this new pool betting option. However, Chelmsford is actually owned by Betfred, so they were never going approve and Ascot are going to launch their own pool betting operation in partnership with both Totesport and Betfred.

Whilst deals are still being finalised for Britbet, the fact that 54 of the 60 racecourses in the UK have backed it is an alarming number and one that could be catastrophic for Totesport. But, as pool betting is so niche, it looks like an almighty uphill task to try and really establish them on the same levels that ToteSport have been able to reach.

Totesport already have a 19.25% takeout from win bets with as big a pool base as you will find. Assurance are still yet to be in place in regards to dividends from Britbet, but you can imagine that these numbers will increase even more, in the short term at least.

Totepool betting – as you can see – is an opportunity to win great sums money, whilst the standard Tote bets will sometimes give you a higher payout and can often give a bit more excitement as you wait for the dividend on your winner to be announced after the race. If you fancy a change from your normal racing bets or are bored of losing on the National Lottery, Tote might be just what you’re looking for.