The Best Mate Bonus is one of the newest additions to the racing calendar. It’s only been around since 2019 and it comes as a celebration to one of the most influential jump horses of all time. It’s a prize fund that highlights the racing process that Best Mate took to really establish himself as one of the elite horses of his era. It starts with entry to the Peterborough Chase, a race that Best Mate won in 2002. He then went on to win the King George VI and the Cheltenham Gold Cup in the same season. To date, no other horse has followed in his footsteps.

The prize fund is hosted by the high-end bookmaker, Fitzdares. They have given a £500,000 bonus to any horse that can win the Peterborough Chase, King George VI and the Cheltenham Gold Cup in the same season. It’s been arranged like to this to draw a bigger crowd in for the Grade 2 Peterborough Chase, which is seen as a great stepping stone for those that are looking to progress into the realms of Grade 1 National Hunt racing given that King George VI and Gold Cup are two of the best.

Quick Answer: The prize money for winning the Best Mate Bonus is around £500,000. In total, the winner would receive just over £1 million after collecting the prize money from the other races.

Who Puts up the Money?

As stated, it’s Fitzdares bookmaker who have put up the money for the bonus. It was they who came up with the idea of commemorating a horse like Best Mate and given that the route that he took to get to the top was so difficult, it’s one that is worth celebrating.

As part of the deal they are also set to sponsor the Peterborough Chase as well, which means that not only is more money coming into the industry for the bonus, but also for that race as well. It’s also worth noting that on top of the £500,000 bonus from Fitzdares, the horse that wins all three raced will pick up a little over £550,000 from prize money alone, making the package worth over £1 million.

What Challenges Does the Bonus Face?

The main one is that the three races are all very different. The horse has to be able to go and run two and half at Peterborough, three miles at Kempton and then three and a quarter at Cheltenham. Basically, you need to find a middle-distance horse that can stay over 3+ miles. Given that no other horse since Best Mate has been able to achieve this, will highlight how hard it will be to do.

However, it’s not uncommon for horses who do well over longer distances work their way up over time. The problem is that this is usually over a few seasons and not just a few months. Given that the racing starts in December for the Best Mate Bonus and then ends in March at Cheltenham, it’s not a huge amount of time to work out if horses will be able to stay the distance or not.

Who Was Best Mate?

Best Mate is one of the most iconic and well-known racehorses of all time. Whether you were a fan of National Hunt or flat racing, everyone knew who Best Mate was and just how good he was. Over his career he raced 22 times, with 14 wins and 7 second places to his name, 10 of those Group 1. He was owned by Jim Lewis and was trained by Henrietta Knight. In 2000 a 40% stake in the horse was sold to Markus Jooste for £242,000.

He is best known for his three Cheltenham Gold Cup wins that came in 2002, 2003 and 2004, respectively. In his final Gold Cup win he went off at odds of 8/13, which are some of the shortest ever for the race. As a result, he was often compared to the great Arkle, although his best rating of 182 was someway off the 212 that Arkle achieved.

Here is a list of some of his major wins and achievements before his death on 2005 aged 10.

What Are the Races Involved?

There are three races involved for the Best Mate Bonus, which are:

The process is pretty simple in that the horse that takes the £500,000 bonus needs to win all three of these races to do so. As we stated earlier, only Best Mate has ever achieved this feat and whilst it’s new, it will prove to be difficult because of the difference in length of the races. Here’s a little more info on each race:

The Peterborough Chase is the only Grade 2 race of the three. It’s been running since 1969 with the first winner being that of Purdo, ridden by Bob Davies. The race takes place Huntingdon Racecourse, which is near Cambridgeshire. It’s run over 2m 4f ½ furlongs and has a total of 16 fences over the track. The race is run in December and comes with a prize fund of £60,000.

The most iconic horse in the race’s history is that of Edredon Bleu. The French horse was able to win the race 4 times in a row from 1998 through to 2001. Edredon Bleu was trained by Henrietta Knight and it was in fact his stable mate, Best Mate, that stopped the horses run in 2002. Other notable winners of the race include 2 time winner, Wayward Lad and Monet’s Garden in 2008.

The King George VI Chase is run at the Boxing Day meeting at Kempton Park. It’s one of the biggest races of the year, let alone National Hunt races and is part of the first meeting back after a Christmas break for most of the industry.

It’s a Grade 1 race and comes with an impressive purse of £250,000, with the winner getting £142,375 from that purse. The race is considerably longer than the Peterborough Chase at 3 miles exactly, which means that any horse to win both are going to have to improve over that distance.

The King George VI is best known for its affiliation with the great Kauto Star. He won the race on 5 separate occasions from 2006 through to 2011. Since it was first run in 1937 the race has had some of the best National Hunt horses of all-time win, including Long Run, Desert Orchid, Wayward Lad, See More Business, One Man, Cue Card and Silviniaco Conti. 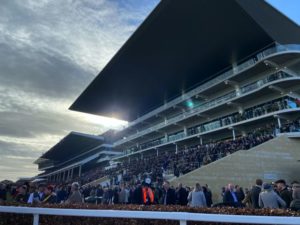 The Cheltenham Gold Cup is the premier event in British National Hunt Racing, taking place at the famous Cheltenham Racecourse. It takes place as part of the Cheltenham Festival and this Grade 1 race comes with a massive purse of £625,000, with the winner getting £351,688.

It was first run in 1924 and at 3m 2 furlong provides a stiff test for one of the strongest fields in National Hunt racing anywhere in the world. It’s a huge step up in distance from the Peterborough Stakes, which makes Best Mates path to glory in the race even more impressive.

The names of winning horses and jockeys is a who’s who of the all-time greats of the sport. It’s Golden Miller who is the most decorated though, with 5 wins in total from 1932 to 1936. In more recent times winners have included Kauto Star, Best Mate, Sizing John, Denman, War of Attrition, Kicking King, Master Oats, Mill House and of course, possibly the greatest ever, Arkle.