It’s probably one of the most elusive and hardest to win horse racing titles in the industry though and this is highlighted by the fact that there have only been 2 winners since it was first conducted in 1921. One of the reasons as to why there have been so few winners is that each of the races is quite different in length, which means it’s hard for a horse to specialise in each discipline.

The Triple Crown includes three races in total which are the Irish 2,000 Guineas, Irish Derby and Irish St. Leger. Even though there has been additional prize money on offer at points for the winner, as it stands there is currently no additional prize money. That being said, a horse that wins all three races is going to pick up over €1.2 million in earnings from the three races, making it one of the highest paying events in horse racing.

Quick Answer: There is currently no additional prize money for the Irish Triple Crown, however, the winner would potentially collect over €1.2 million in earnings by winning the three races.

What Is the Format of the Races Involved?

As we have mentioned the Irish Triple Crown doesn’t just include three random horse races, instead, they include three of the best flat races in the sport, let alone just in Ireland. Given that two of the three races are aimed at only three-year-old horses (Irish 2,000 Guineas and Irish Derby), it means that horses have just one chance of winning the Triple Crown (Irish St Leger is available to horse aged 3 and up).

Racing starts in May with the Irish 2,000 Guineas, followed by the Irish Derby in late June or early July and is completed by the Irish St Leger which is run in September. Here’s a little more info on how each of the races works:

The Irish 2,00 Guineas has been running since 1921 and is the youngest of the three races. It was the final inclusion to the Triple Crown and was created to compare with the 2,000 Guineas that had become massively popular in the UK. It takes place just 3 weeks after the UK’s version, so you do get some horses making the trip across to run in both races, even though the time between the race is short. 9 horses have won both the English and Irish 2,000 Guineas in the same season.

The race takes place at Curragh Racecourse which is in County Kildare. It’s one of the best-looking racecourses in the country and is the biggest race at the course. It’s open to three-year-old horses and is run over a 1-mile track. The purse is €400,000, with €232,000 going to the winner.

Given that horses can only run in the race once, it’s been won by some big names over the years. This includes the likes of Rock of Gibraltar, Churchill, Gleneagles, Canford Cliffs, Dubawi, Spectrum and Flash of Steel, to name a few.

In terms of jockeys, none have more wins than that of Tommy Burns Sr. and Martin Quirke, with 5 apiece. In terms of the trainer, Aiden O’Brien has dominated this race with 11 wins, starting with his first in 1997 with Desert Kings and his most recent being Churchill in 2017. 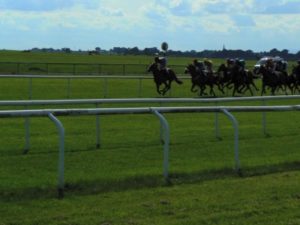 The Irish Derby is the biggest flat race in Ireland. It’s been running since 1866 and as a result, is also one of the oldest flat races in the country as well. Like the Irish 2,0000 Guineas, the race takes place just 3 weeks after the Epsom Derby, with the pair very closely linked in terms of runners and riders.

There were a couple of older instalments of the Derby that took place over the years. The first came about in 1817 called the O’Darby Stakes and then the Curragh Derby in 1848. But both were relatively short-lived. The modern version was created by the 3rd Earl of Howl, the 3rd Marquess of Drogheda and the 3rd Earl of Charlemont, before first running in 1866.

However, it could be argued that the Irish Derby didn’t get the recognition that it does now until 1964 when the prize money was drastically increased. It’s now €1.5 million purse makes it one of the richest horse races in Europe and the richest in Ireland. The winner takes home a cool €855,000 for their days work.

Like the Irish 2,000 Guineas, the race is hosted at the Curragh Racecourse in County Kildare. It’s a distance of 1m 4f make it a little longer than the Guineas, but shorter than the St Leger. Aiden O’Brien has also dominated this race over the years, with 13 wins to his name starting with Desert King in 1997. Leading owner is Michael Tabor with 14 wins and leading jockey is Morny Wing with 6 wins.

The Irish St Leger is often seen as the final of the major flat races of the season and is the final leg of the Irish Triple Crown. The race has been running since 1915 and like the other two, is also held at the Curragh Racecourse in County Kildare.

However, the race is the longest out of the three, measuring 1m 6f in total distance. Also, it’s the only one out of the three that is open to horses aged three and up (since 1983). This is one of the reasons why it’s been so tough for a three-year-old to compete against more mature horses and therefore why there have been so few Irish Triple Crown winners over the years.

There have been just 2 winners to speak of wince 1921. The first is that of Museum, who went on to lift the Triple Crown in 1935. The second is that of Windsor Slipper in 1942.

The lack of winners has taken away some of the interest in the Irish Triple and the fact that the last attempt at the Triple Crown was that of Desert King in 1997, winning both the 2,000 Guineas and the Derby. The fact is now, it’s going to be even harder for a 3-year-old to go on and win the St Leger given that it’s open to horses older and more experienced.