The county of Yorkshire is something of hotbed for UK racing, with no fewer than nine courses residing in the land of the White Rose. York racecourse itself of course is the most well-known of these, whilst Doncaster famously plays host to the final Classic contest of the season in the shape of the St Leger. Lying a little to the east of those two venues, and just outside the historic market town of the same name, is the popular venue of Beverley.

Situated on common land known as the Westwood, and featuring the rolling East Riding hills as a backdrop, the track resides in an area of Yorkshire steeped in racing heritage. It was in fact all the way back in 1519 that the Kiplingcotes Derby – said to be the world’s oldest horse race – took place in the region. The first grandstand wasn’t built on the current site until later, in 1767, but that still means the course now has more than 250 years of history behind it.

Regular racing at the track was a little stop-start in the early years, but Beverley has now become an established fixture of the summer racing season. Renowned for its relaxed and friendly atmosphere the venue stages around 19 meetings between the months of April and September, with the pick of the bunch being Hillary Needler Trophy day in May, and the Listed class Beverley Bullet sprint which takes place in August each year.

Beverley is a flat only venue, and stages races over distances of 5f, 7½f, 1m, 1m½f, 1m3½f, 2m and 2m3f. An efficient watering system in place at the course means that firm ground is extremely rare; however, it isn’t the quickest of tracks to drain and it can quickly become very soft when the rain arrives. 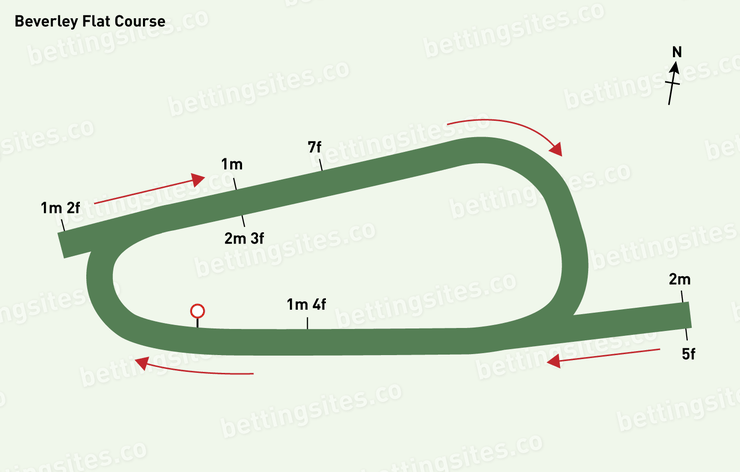 A right-handed course of a shade over 1m3f in circumference, the track at Beverley is broadly oval/egg shaped in conformation. The two banked turning sections of the course are relatively sharp, particularly the turn which takes the runners from the home straight and into the back stretch.

Overall, the track is fairly flat, but the runners are met with a downhill section on the penultimate bend, before the ground then rises again to take the field into the home straight and continues to rise all the way to the line. Given that gradually rising ground, this final two and a half furlong straight is easily the stiffest section of the track.

The five furlong sprint contests begin on a spur which features a right-handed dog leg turn leading into the home straight. Featuring steadily rising ground throughout, this is viewed as being one of the stiffer five furlong courses in the country, and an ability to see it out well is a good indicator that a runner may stay six furlongs at an easier course. Despite the stamina demands of the sprint track, it is still a big advantage to be quick out of the stalls and so able to gain an advantageous position headed into that right-handed jink into the straight.

Although the home straight is stiff, the remainder of the course is considered to be relatively easy, and as such it can pay to race prominently over all distances. Overall, Beverley favours the long striding galloping type of performer who can prove very difficult to peg back if getting into a rhythm up front. Hold up performers do not have a good record at this venue.

One final note on the five furlong draw at Beverley is the fact that the bias does seem to even out on soft ground, as under such conditions the outside rail does tend to ride quicker. On anything quicker than soft ground though, low is undoubtedly the place to be around here.

Races over seven and a half furlongs, which feature a right-handed turn into the straight only around a furlong from the start also favour those drawn low. The strike rates over this distance, across 140 races analysed, are: 10.7% for low, 7.2% for middle and 8.8% for high. Not anything like so pronounced as in the five furlong events, but still worth bearing in mind when making those selections.

There does also seem to be a bias in favour of those drawn low over 1m3½: 13.6% low, 7% middle and 8.1% high. This would make sense as the first bend does come up relatively quickly following the start in such events. With a sample size of only 36 races though this bias isn’t as copper bottomed as those in evidence over the shorter distances. At all other distances there doesn’t seem to be any significant bias in evidence.

Jockeyship can be at a premium on the round course here, with judgement of pace crucial heading into that stiff home straight. As such, a rider with a proven record at the venue can be well worth a second look. Ben Curtis has topped the pile amongst the riders in the past five seasons boasting around a 20% strike rate and handing supporters a level stakes net win of almost £9. No other jockey has returned a net win over this period. Locally based David O’Meara has been the man to follow in the training ranks during this spell – showing a 17% strike rate and a very healthy level stakes net win of over £33.

One of the most interesting stats at Beverley is the fact that blindly backing the market leader in every handicap contest over recent seasons would have returned a net win of over £7.50. The favourite also fared well in non-handicap races for runners aged four and older during this time – handing supporters of the market leader a level stakes net win of nearly £5.