Situated a couple of miles to the east of the famous seaside town of the same name, and only around a mile from the coast, Brighton is one of Britain’s most southerly racecourses. Based in Kemptown and perched level atop Whitehawk Hill, around 400ft above sea level, the track affords excellent views of both the city of Brighton and Hove, and the sea itself.

With those excellent views, the track is one of the most picturesque in the land and – with the earliest reports of racing in the area dating as far back as the early 1700s – Brighton can also rival many locations when it comes to its equine history. First staging events on the current patch of land in 1783, the course has benefited from Royal patronage in the past – the Prince of Wales who later became George IV being a frequent visitor – and has held a number of fairly prestigious contests including a trial for the Epsom Derby.

With the Royals ceasing to attend and the British seaside holiday decreasing in popularity, the track experienced a downturn in fortunes in the 20th century, but was revived by a £4million investment by Northern Racing in 1998. Now part of the Arena Racing Group, the track may not quite match the prestige of years gone by, but has at least experienced an upsurge in popularity and is renowned for its beautiful setting and relaxed, friendly atmosphere.

Situated on the same land as that used back in those 1783 races, the current course is around half a mile shorter these days, with the 4f section which cut across the golf course no longer in use. The other major change is that despite having staged hurdles contests in the past, the track is now a flat-only affair.

Considering the course is located high up on a hill, features a fast draining chalk base and stages racing throughout the summer months, it isn’t too surprising that genuinely soft ground is pretty rare at Brighton, with going on the firm side of good being the norm. However, despite this fairly sturdy surface the ground at Brighton does tend to become pretty cut up in comparison to many other tracks, particularly towards the end of the season.

Brighton currently stages around 22 fixtures per year, all of which take place between the months of April and October. The pick of the fixtures comes in August as the track plays host to its signature three-day meeting headlined by its most valuable race, the Brighton Mile Challenge Trophy. 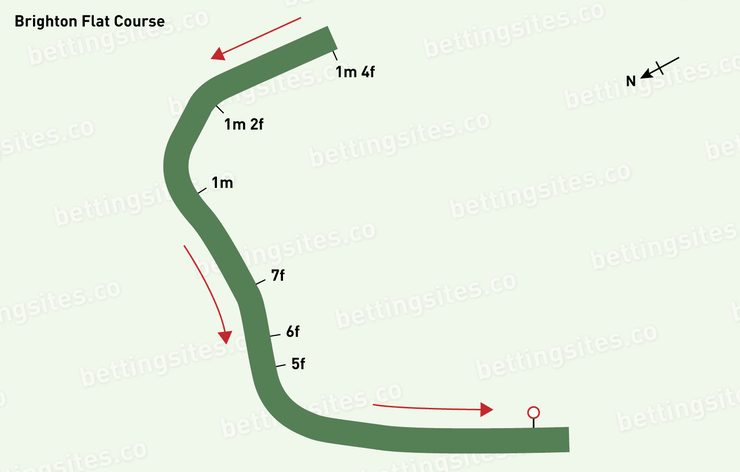 When a track is variously described as being, challenging, unusual and unique, it is probably safe to assume that we aren’t talking about your standard oval circuit. Brighton is in fact one of only a few British tracks which does not have a complete circuit at all. Three-sided and open, the track is roughly in the shape of a “U”, close to 1m4f in length, and features severe undulations. Given this layout, the longest races at the track take place over the full course distance of 1m4f.

Runners tackling this 1m4f course begin at the lowest part of the track and set off on route to the wining post, which represents the track’s high point. Following the start, the field quickly encounters steadily ascending ground which then leads into the first sharp left-handed turn into the back straight – containing the starting points for races over 7f214y, 5f213y and 5f59y.

This back straight is actually anything but straight, but in fact more of a “v” shape, featuring a right-handed kink at around the mid-point. The second half of this back section does feature relatively level ground, before then turning sharply left-handed into the home straight. This second turn is comfortably the trickiest section of the track and features some of the most steeply descending ground in the whole of world racing.

Once into the 3½f home straight, the ground continues to descend until the 2f marker, before then beginning to rise steadily once more, and only really beginning to flatten out inside the final 100 yards. The home straight also cambers towards the inside, which can lead to bunching on the rail and potential trouble in running.

Given all these twists and turns, uphill and downhill sections, it is no surprise that Brighton is viewed as something of a specialists track, and any runner who has previously shown an aptitude for the course is well worth a second look. In general, the course is more suited to the handy, well-balanced performer, as long-striding types are prone to becoming unbalanced and losing their rhythm coming around the final turn. Runners do also need to stay the trip well, as that final stiff climb towards the line can expose any stamina limitations, even on the typically dry ground.

When looking at the races over sprint distances, one of the most important traits to seek out is an ability to break quickly from the stalls. In these sprint events the runners are very quickly met by that tight, descending left-handed turn, and an ability to get there first and potentially poach a lead can prove crucial to success.

Featuring a left-handed turn so soon after the start, you would imagine that the low drawn runners would enjoy a significant edge at Brighton. However, this isn’t really reflected in the stats. Across 68 races over 5f-6f at the track between 2011 and 2020, low drawn runners boasted a 7.4% strike rate, compared to 10% for those drawn in the middle, and 9.3% for those drawn high.

One contributing factor towards this result is the fact that, when the ground is riding on the soft side, the field often heads to a quicker strip of ground on the stands rail. Those drawn high are therefore at an advantage in such conditions.

Digging a little deeper into this, we find that a middle to high draw is a definite advantage at Brighton over all distances when the ground is described as good to soft or slower. An analysis of 85 races run under such conditions returns strike rates of 6% for low, 10.6% for middle and 10.5% for high. The respective figures for the 212 races run on good or quicker ground over the same 2011-2020 period were; 9.6% for low, 9.2% for middle and 9% for high.

The term course specialist can be applied to jockeys as well as horses, and there are few tracks which place quite such an emphasis upon the skill and knowledge of the rider as Brighton. Getting a runner to break quickly, maintaining a rhythm around the twists and undulations, and judging the pace correctly in order to keep enough in reserve for the tough finish are all key elements to success at this unusual course.

Brighton is not the track at which to make a net win by blindly backing the market leader. The past few years have seen the favourites return a 30% strike rate and -£94.55 level stakes loss in handicap events. The 48% strike rate in non-handicaps is significantly higher, but has still resulted in a level stakes loss of -£94.55.