We are lucky here in Britain in that we have a wide range of excellent racecourses spanning just about the length and breadth of the country. There are however only two in the north western county of Cumbria – one of which lies in the village of Blackwell, just to the south of the city of Carlisle. A home to both National Hunt and flat racing action, and surrounded by the beautiful Cumbrian countryside, this quaint track is a popular destination for racegoers, both from the local area and further afield.

And it has been that way for over 100 years now, with the course based on its current site since back in 1904. The history of racing in Carlisle actually dates back a good deal further than that though, with the inaugural running of the Carlisle Bell taking place as long ago as 1599. Still held to this very day, “The Bell” which is awarded for success in the race is one of the oldest sporting trophies in the world. The track is also noteworthy in betting history as it was the track at which The Tote pool betting product made its debut in 1929.

These days Carlisle is a small but – thanks to a significant renovation in 2002 – thoroughly modern venue which plays host to a total of around 22 meetings per year. Together with the Carlisle Bell – and taking place on the same card in June – The Cumberland Plate is the biggest flat contest of the season. Over jumps, the two Listed class events of the Colin Parker Memorial Intermediate Chase in November, and December’s Houghton Mares’ Chase take centre stage.

As mentioned, Carlisle racecourse is capable of staging both flat and National Hunt action. Both the flat and jumps track lie on what is essentially the same patch of land, with the configurations used in the various disciplines varying only slightly.

The course itself is best described as pear-like or triangular in shape, in that it features three straight sections and three bends which are taken right-handed. The turns themselves are fairly easy which, combined with the three long straight sections, makes this a track well-suited to the galloping type of performer. Runners do however also need to be pretty well balanced, for whilst the turns are fairly sweeping, the underfoot terrain is anything but flat, featuring extensive uphill and downhill sections.

The toughest of these uphill areas comes in the home straight, providing a finish which is noted for its stiffness. Overall, the track is considered to provide a stern test of stamina at all distances. The jockeys are of course aware of this, which can lead to many races – particularly over the longer distances – being steadily run affairs.

One final element which has no doubt contributed to the track’s reputation for providing a stern test is the going. Based on a slow-draining clay subsoil, soft conditions are a regular occurrence around here, with the ground often becoming extremely testing during the winter months.

Horsemanship can be an important factor around here, with the riders needing to judge the pace correctly in order to ensure they have sufficient petrol left in the tank for the climb up that punishing hill. Ben Curtis has been the man to follow on the flat over the most recent seasons having registered an impressive 22% strike-rate and rewarded backers with a £1 level stakes net win of over £46. Over the jumps across the last few years it is Harry Skelton leads the way with a 26% strike-rate. Will Kennedy has proven the most successful jumps jockey to follow though with supporters being in the black to the tune of almost £22 to £1 level stakes.

In the training ranks, anything hailing from the jumping yard of Nicky Richards is well worth a second look – the locally based handler having registered a 26% strike-rate and almost a £41 net win to £1 level stakes in recent seasons. On the level it is Karl Burke (21% strike-rate, around £31 level stakes net win) who has fared best of late.

Backing every favourite at Carlisle has been a losing proposition overall. However, backers who restricted their bets to three year old handicap contests across the five seasons between 2015 and 2020, would have been rewarded with a £1 level stakes net win of £26.29. 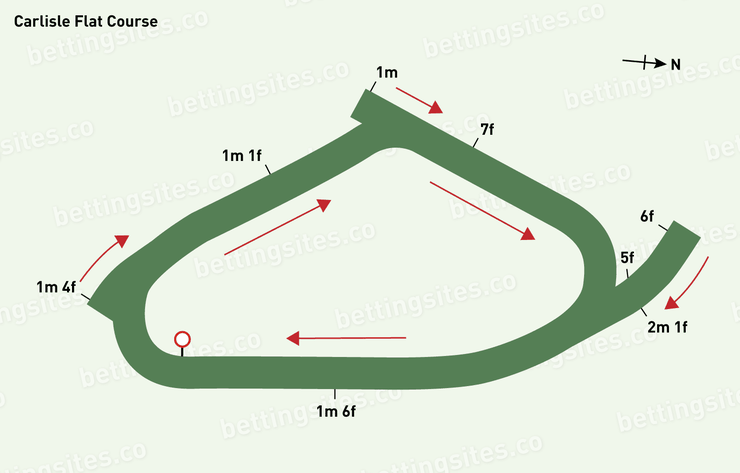 A full circuit of the flat course measures a shade over a mile and a half. The 1m4f events begin from a very short spur just beyond the winning post, with the field heading downhill for the first three furlongs, before then beginning to climb from around the 1m1f start. A right-handed turn then takes the runners into the back straight which is the most level section of the track. The 6f206y events begin in this back straight before the runners encounter the sharpest of the track’s three turns leading into the home straight. It is here where any stamina limitations will likely begin to be exposed, with the straight rising uphill for much of its 3½f duration – only really flattening out in the final 50 yards.

In addition to the 1m4f start, the flat course also features two additional spurs; the first of which contains the one mile start and leads into the back straight. The final spur is the longest of the three, turns into the home straight and contains both the five furlong and the 5f193y starts. The runners at the longer of these two distances initially face a bend of around one and a half furlongs, which slowly straightens out to join the home straight of the round course. This straight provides one of the tougher finishes to a sprint in the country and can prove particularly challenging for juveniles.

In terms of the type of runner favoured at Carlisle, the track is generally thought to be pretty fair, with hold-up performers having plenty of time to mount a challenge in the long home straight. It does however seem to be a slight advantage to race up with the pace over trips of seven furlongs and beyond, with those who have obtained a prominent position on the turn for home in such events often proving tough to reel in.

Over the longer distances at Carlisle, i.e. those beyond 1m4f, runners tend to thin out from an early stage, and as such there is rarely any trouble in running or scrimmaging for room in the closing stages. This isn’t the case over the shorter trips, where runners often fan across the track in the straight. In such instances those racing up the centre are generally thought to be favoured, unless the ground is soft, in which case the advantage switches to the stands rail.

With races over five furlongs and six furlongs featuring a turn into the straight, you would imagine that those drawn on the inside would be at an advantage. However, that isn’t really borne out in the stats. Across 105 sprint races analysed, the win percentages were as follows: 7.4% for low, 9.2% for middle and 9.7% for high. The most likely reason for this is that the stands rail often rides quicker when the ground is on the soft side – which it frequently is here.

There is little evidence of a draw bias in races which begin on the round course. That said, those drawn high seem to be at a disadvantage in races over seven furlongs, possibly due to the sharpest bend on the track coming up relatively quickly following the start. 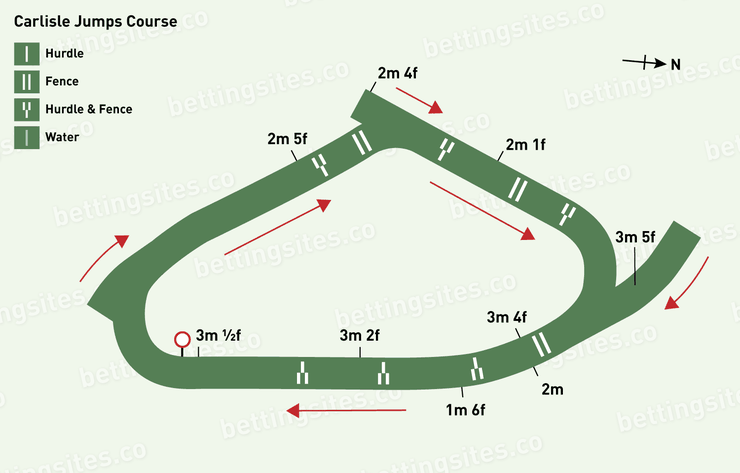 There are actually three separate National Hunt course layouts at Carlisle; one for the chase course and two for the separate hurdle tracks. Overlaying the flat course, all three share the same characteristic pear shape and undulating nature, but due to the manner in which they are set up the outer hurdles and chase courses are slightly longer at 1m5f per circuit. The second of the hurdles courses utilises much of the innermost section of the track and is therefore slightly shorter.

The fences on the chase course, of which there are nine, are amongst the easiest to be found anywhere in the country, with the only real difficulty coming as a result of their placement. Most are fairly straightforward but both the first in the back straight, and in the home straight, can catch some runners out due to the downhill approach following a bend.

Each of the two hurdle courses, the inner of which was opened in 2012 and named in honour of retiring groundsman Tony Wootton, feature six standard hurdles per circuit. In common with the chase course they are suited to the resolute galloping type of performer with no weaknesses in the stamina department.