Situated in the village of Cartmel in the south of the Lake District, this picturesque venue is the oldest of Cumbria’s two racecourses. Tales from yesteryear report monks racing their mules for sport way back in the 15th century, suggesting that the area’s roots in equine entertainment go back a very long way indeed. Monks and mules are (thankfully) a far cry from the action on show at the track in the present day though, with the first written dispatch of a more modern version of the sport coming later in 1856.

Located in the midst of one of Britain’s most scenic and frequently visited holiday locations, Cartmel Racecourse’s operators makes no bones about the fact that their racing business model is built around taking advantage of the summer crowds. And it’s a pretty successful business model at that, with the track regularly placing behind only the Aintree and Cheltenham behemoths when it comes to average race day attendance, frequently attracting crowds of 10,000 to 20,0000.

Famed for its relaxed holiday atmosphere, punters gather in the centre of the track at Cartmel, from where they are able to enjoy a fun fair on one side of the central home straight, and the winners’ enclosure and parade ring on the other. Benefiting from significant investment in 2004, the track also features a grandstand and all the bar and restaurant facilities you would hope for from a modern venue.

Relaxed it may be, but the track is perhaps most famous for an act of skulduggery as a result of the ultimately foiled Gay Future con of 1974 – a doppelganger incident which features in just about every “Racing’s Greatest Swindles” book on the market.

Cartmel began life as a flat racing-only venue, but these days has made the switch to the National Hunt arm of the sport. It hasn’t shed its summer racing roots though, with the season running between May and August. There are only nine race days in all, spread across four meetings based around the summer bank holidays. 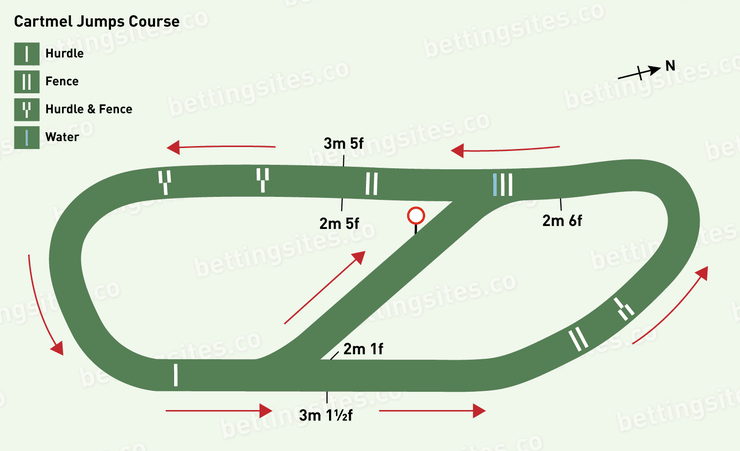 The Cartmel track is oval in configuration, with each circuit measuring a shade over 1m1f. Left handed and narrow, with sharp turns and relatively short straight sections, the course is generally suited to the nippier, handier type of performer who likes to race up with the pace, rather than the dour, long-striding galloper. When seeking out those winners, you should also look for a runner who is able to travel comfortably at pace, as they do tend to go pretty quick at what is very much a speed-favouring track.

Although the oval layout of the track is similar to many others in Britain and further afield, the home straight at Cartmel is a little out of the ordinary. Bisecting the oval, the finishing straight effectively links the two outer straight sections of the course, giving the track a figure of eight appearance when viewed from above. This central home straight is around one furlong in length and features slightly rising and undulating terrain all the way to the winning post.

Hurdle events at Cartmel take place over distances of 2m1f, 2m6f and 3m1½f , with the runners taking in two full oval circuits before entering the home straight in the 2m1f events, and three full circuits before doing so in the 3m1f contests.

The track features four hurdles per circuit; one shortly after the 2m1f start, two in relatively quick succession at the back end of the back straight, and one just before the bend into the home straight. Overall, the low number of obstacles per circuit, and short run in following the final flight, make it pretty tough to win from off the pace, with the hurdles course being ideally suited to nimble front runners. Something of a specialist’s track, it isn’t unusual to see the same runners pop up in the winners’ enclosure time and time again.

Cartmel’s chase course features six fences per circuit and stages races over trips of 2m1f, 2m5f, 3m1½f and 3m5½f. The number of obstacles around Cartmel’s chase course is low in comparison to other National Hunt tracks, but the fences themselves are pretty stiff for a smaller track. An open ditch and a water jump – which must be tackled three times in the 3m2f contests – add to the difficulty, but it is the final three fences, which come up in pretty quick succession, where most mistakes are made.

Unlike on the hurdles course, where the final obstacle comes just before the home straight, on the chase course the final fence is tackled a long way from home. Fully four furlongs from the line in fact, making the run-in following the final flight the longest of any track in the country. Given this length, it perhaps isn’t surprising to learn that the lead can often change hands between the final flight and the line, with the chase course being slightly more amenable to those runners who like to come with a long late run. It should be noted though that much of this run-in is around a fairly sharp bend, so will likely still be against the long-striding gallopers.

When looking at the stats in recent seasons, there are a few names which stand out amongst the trainers and jockeys. Of the jockeys, Sean Bowen (26%) and Brian Hughes (22%) lead the way in terms of strike-rate, but it is Henry Brooke who tops the pile when measured by net win to £1 level stakes of around £20.50. Boasting a 24% strike-rate and a £1 level stakes net win of over £33, Peter Bowen has been the man to follow in the training ranks.

This isn’t a track which has been particularly kind to favourite backers over this same five-year period. The non-handicap chases have been the happiest hunting grounds for supporters of the market leader, but whilst a 54% strike-rate is pretty impressive, this has still only been enough to squeeze out a £1 level stakes net win of £1.61.