Churchill Downs racetrack is perhaps most famous as the home of the Kentucky Derby, probably the biggest race in the US, and the Kentucky Oaks. The course is situated in South Louisville in the southern United States of America. Racing here is solely on the flat. The Kentucky Derby is the oldest continuously held major sporting event in the United States. The winning trophy only weighs 3 1/2lbs while the winner is also awarded a blanket sewn with roses weighing about 40lbs. The winner may take home small trophy but the prize money for the winner in 2019 was raised to $1.86m.

In 2001, the track underwent a $121 million renovation taking almost four years to complete. The Churchill Downs course has also hosted the famous Breeders’ Cup on no fewer than nine occasions, most recently in 2018. The track is renowned for bringing in record-breaking crowds. It has a remarkable capacity of 170,00 and watching horses is obviously hungry work – on Derby day spectators will eat 142,000 hot dogs (in total, not each!).

Churchill Downs is synonymous with the Twin Spires originally constructed in 1895. The Twin Spires have visitors from all over the world flocking to have their photo taken in front of them. The current year of 2020 will be the 125th anniversary of The Twin Spires at Churchill Downs. The track hosts seven Grade 1 contests in a season, not to mention the 26 that have Grade 2 or 3 status. The track has no fewer than 47 barns that can stable up to 1,400 horses, clearly showing its size.

The Kentucky Derby is the feature race of the season and is the opening leg of the American Triple Crown. This is then followed by the Preakness Stakes before the final leg, The Belmont Stakes. 13 horses in total have lifted the Triple Crown, however only three fillies have won the opening leg at Churchill Downs.

No filly has ever gone on to win the other two legs, hence landing Triple Crown. The Kentucky Derby Festival has many huge contests but holds its feature horse race, the eponymous Derby, on the first Saturday of May. The 2020 running was moved from May to September due to the Covid-19 pandemic. If the race goes ahead it will be the 146th and this legendary race is regarded by some as the most exciting two minutes in sports. 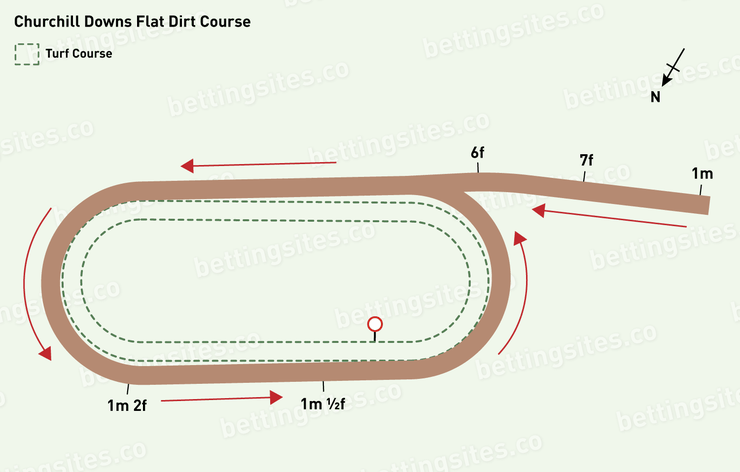 The dirt track is the main track here and it is the one the Derby is run on. The track is left-handed, sharp and is only one mile in circumference. The bends are tight but the two straights, which are even in length are wide. There tends to be a high percentage of winning favourites here. An example is that 40% of 2-year-old non-handicap races over the last five years (correct as of May 2020) have been won by the favourite.

They go hard here from the minute the gates crash open and so a good start is often crucial and the fractions set are of high importance. There is an advantage to have the inside draw for horses that have the early speed to use the gate position. Trainer Steve Asmussen has a terrific record here as does rider Tyler Gaffalione. 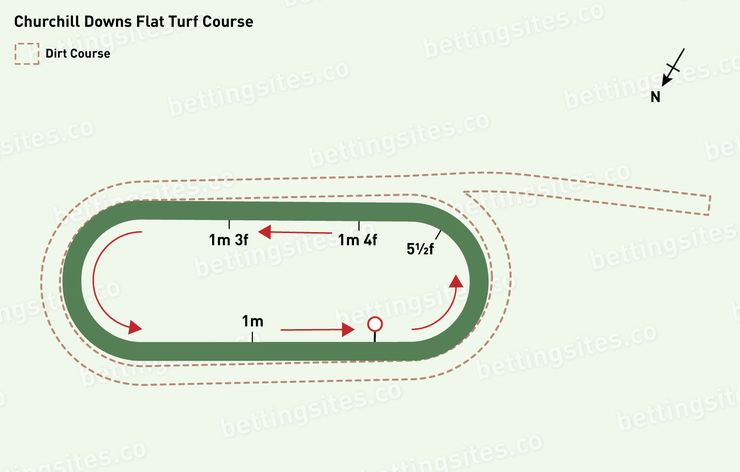 The turf course lies on the inside of the dirt track. A circuit here is only seven furlongs round and only 24 metres wide. Grass has more give than dirt, therefore is easier on a horse’s feet and legs. This means when the track is firm, speed horses can run even faster. This course is one of the fastest tracks in the United States when conditions are right, which they often are.

The straight here has a long run-in from the final turn to the winning line. If a horse is therefore close enough, there is an option to pounce late. That said, horses that race prominently and run solid fractions can be hard to catch and occasionally slip the field. This course is without doubt a speed test. Depending on the type of racing style, a horse that is also a prominent racer can benefit from a gate on the inside. That can be worth a couple of lengths so is well worth taking into consideration.