Lying in the River Suir Valley, flanked by the Comeragh Mountains and the fabled Slievenamon, is the County Tipperary racecourse of Clonmel.

Also know as Powerstown Park, the track has been in operation for over 150 years now, and stages around 12 meetings per season, featuring a mix of flat and National Hunt action.

The bulk of these meetings take place during the autumn/winter months, and tend to be afternoon affairs, with evening racing then taking over from late spring through to early autumn.

Both flat and National Hunt racing take place on the same right-handed track. Roughly oval in shape, each circuit measures close to 1m2f and features two fairly tight bends and another more gradual turn into the home straight. Undulating and testing, the course initially climbs following the winning post and continues to rise around the bend into the back straight. It is at the midpoint of this back section of the track where the ground then begins to descend again, steadily falling around the long sweeping turn, before meeting the stiff, uphill two furlong finish provided by the home straight.

Both on the flat and over jumps, Clonmel is noted as a track which strongly favours the frontrunners. Those able to get into a lead, take a breather through the downhill section of the track, and then kick again in the home straight can prove mightily tough to reel in; this is the case over all distances. This factor is particularly pronounced on going which is good or quicker, and becomes significantly reduced on soft ground, where the long uphill home straight can often see those front runners desperately looking for the line.

Undulating tracks with stiff finishes can often prove demanding for jockeys when it comes to the correct judgement of pace. As such any rider with a proven record at Clonmel can be well worth a second look. Examining the result of the recent years, the names of Davy Russell (24% strike rate and a £11.03 net win to £1 level stakes) and Patrick Mullins (40% SR and a £3.78 level stakes net win) stand out over the jumps, whilst Rory Cleary (33% SR, £8.00 LSP) has fared best on the level.

As at so many Irish tracks, Willie Mullins has been the man to follow in National Hunt contests here, with the multiple Irish Champion Trainer registering an impressive 42% strike rate and a £32.09 net win to £1 level stakes over the past few seasons. The sample of races for the flat trainers is comparatively small, but runners from the yards of Colin Kidd, Willie McCreery and Jessica Harrington may be well worth a second look, with all three trainers having recorded a 50% strike rate over this same period.

One of the easiest strategies to follow in order to secure a net win at Clonmel over recent seasons has been to simply back the favourite in all chase contests, with such runners returning a 43.67% strike rate and a net win to £1 level stakes of £11.03. 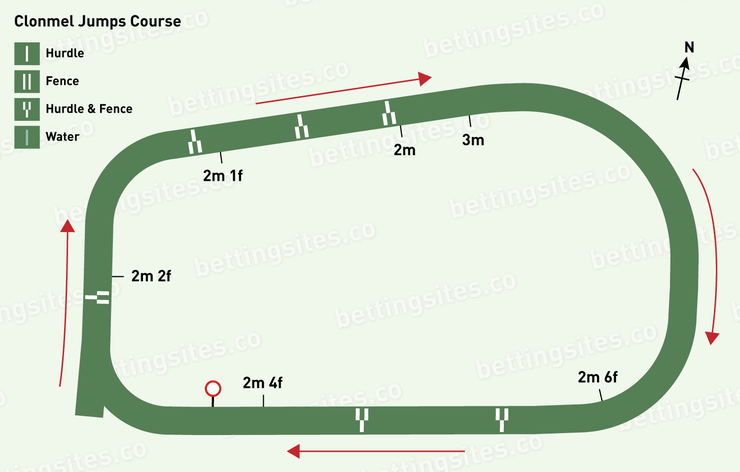 The national hunt track utilises much of the same land as that of flat course, but is effectively split into two, with the chase course lying inside the hurdles track. Chase contests are staged over distances of 2m1f, 2m4f, 2m6f and 3m, and hurdle events over 2m, 2m½f, 2m4f, 2m6f and 3m.

Runners tackling the chase course – such as those lining up in the tracks signature Grade 2 Clonmel Oil Chase – will be greeted by seven fences per circuit; one on the section leading from the home straight to the back straight, four in the back straight, with the final two waiting in the home straight following that long sweeping bend out of the back stretch. The trickiest of these fences is the first in the home straight as it comes up pretty quickly following the downhill turn for home – meeting the obstacle too quickly or slightly off balance can be a race-ending error. Any runners hoping to make a winning surge following the flight meanwhile don’t have much time to do so, with the final run in measuring only 150 yards.

The hurdle track features a similar layout to that of the chase course, albeit with one less obstacle per circuit; again it features one flight on the run from the winning post into the back straight and two in the home straight, but this time only three down the back stretch.

Both the chase and the hurdles courses again favour the prominent racers over all distances. All rules do tend to have an exception though, and here it comes in the 3m handicap hurdle events, where those who like to race in the middle of the back or come from behind seem to fare unusually well. 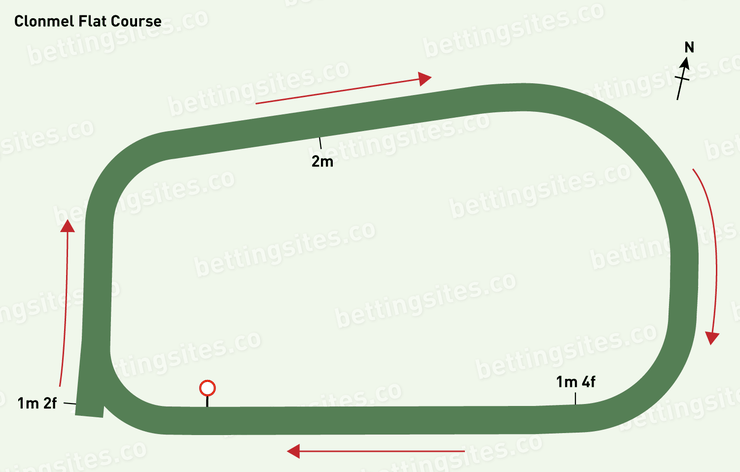 In comparison with the National Hunt fare, the flat meetings at Clonmel are relatively thin on the ground. So thin that there is often only one such fixture per season. Not only are the flat meetings here rare, they are also pretty unique in that the track does not cater at all to those runners who ply their trade over the shorter distances. The minimum trip at Clonmel is in fact a fairly testing 1m2f, and with the other race distances being 1m4f, 2m and 2m½f, this is certainly not a track for the sprinting speedballs.

As mentioned, front runners fare well overall here, and that bias is even more pronounced on the flat than it is over the obstacles. Those who like to get to the lead regularly maintain that advantage having had the opportunity to refill their lungs on the extensive downhill turn into the straight.

Due to the scarcity of the flat meetings at the track, the draw trends aren’t so cast iron here as at many other flat racing venues. Nevertheless, those drawn low do seem to hold an edge due to being able to save ground around the first two fairly tight turns in particular. This edge tends to be more significant the quicker the ground is, becoming much less of a factor in softer conditions.