Rapidly closing in on its 100-year anniversary, this track is located not in the city of Cork itself, but rather 35km away in the town of Mallow. Initially known as Mallow Racecourse, many locals refer to the track as Cork Racecourse Mallow to this day.

Staging both flat and National Hunt action, the course lays on around 20 meetings per year, with highlights including the three-day Easter Festival, the Cork Grand National, and the Grade 2 Hilly Way Chase. On the flat there are two Cork Group 3 races in the form of the Munster Oaks and the Give Thanks Stakes.

Both the flat and National Hunt courses lie on the same patch of land at Cork, and as such both follow a similar configuration – each being right-handed, broadly oval affairs, which are almost completely flat throughout. The inner section of the track measures around 1m2f in circumference, whilst the outer section, which is mainly used for chase contests is longer at 1m4f.

Due to the flat nature of the course, Cork is not viewed as providing a particularly severe test of stamina, either on the flat or over jumps. Those runners who like to make the running or race prominently can therefore be pretty tough to reel in and tend to go well.

One downside to being located on the banks of the River Blackwater is the fact that the track can be prone to frequent flooding. However, due to the course’s quick draining sandy subsoil and excellent drainage system, Cork is usually ready to race again within 48 hours of such an event. In general, the Mallow venue can be relied upon to produce good ground, which is regularly amongst the best available in the country during the winter months. Even with those floods, they rarely race on very soft or heavy ground around here, and those runners who enjoy better ground can be expected to fare well.

The famous Irish racing name of Mullins stands out in both the trainers’ and jockeys’ tables in the National Hunt events here. Over the past few seasons trainer Willie Mullins and jockey Patrick Mullins lead the way in terms of strike rate with respective figures of 32% and 39%. Solid as those percentages are, backing either man blind would still have resulted in a loss over this period. When using the £1 level stakes net win as a measure, Joseph O’Brien (17% +£0.30), and J J Slevin (16% +£11.87) are the men to lead the way. Trainer Ger Lyons (22% +£28.00), and jockey W J Lee (17% +£14.21) have been the men to follow on the flat in recent seasons.

There also seems to be couple of small windows of opportunity for favourite backers at this track; one over jumps and one on the flat. Again looking at recent seasons, backing the jolly in every handicap hurdle would have registered a 29% strike rate and a small level stakes net win of £3.46, whilst doing so in all non-handicap flat races for runners aged four and older would have returned figures of 53% with a £7.16 level stakes net win.

In addition to the main 1m2f oval, the flat course also features a straight chute which runs directly into the four furlong home straight. Initially capable of staging straight five furlong contests, a two furlong extension to this chute was added in 2019, which now contains the starting points for straight six furlong and straight seven furlong events. The track is one of only two in Ireland to stage straight contests over this longer distance. Events over 1m, 1m½f, 1m2f and 1m4f all begin on the round course.

It can prove to be very difficult for hold up performers to make up ground in flat contests on the round course here, unless the leaders have gone off much too quick up front. As such, a good starting point when seeking the winner can be to look for those contenders who have shown a liking for racing right up with the pace.

When looking at races on the straight section of the course – i.e. those over five, six and seven furlongs – competitors who like to come with a late run can once again find life tough. The main reason for this is that, as the whole field tends to congregate towards the stands side rail in such events, particularly on quicker ground, those who like to come from the back can often need a serious amount of luck in running in order to secure a clear run. When the ground is on the softer side, they do tend to fan out across the track more and the front running bias isn’t anything like as strong.

As the runners tend to track over to the better ground towards the stands rail, a high draw is a definite advantage in all races to be held on the straight course, but only when the ground is good or better. In softer conditions, this stands rail bias seems to even out and as such the draw becomes much less of a factor.

The draw is not so significant on the round course, where the long straights tend to give the high numbers plenty of time to get organised and even out the advantage the low-drawn runners have in being able to get to the bend first. The one exception to this comes in the 1m4f contests, where the low runners do hold an edge due to the fact that the first bend comes up very quickly after the start. 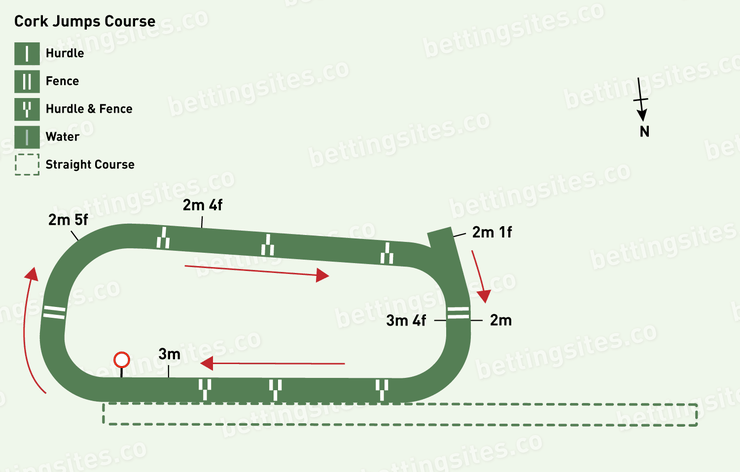 The majority of the hurdles contests at Cork take place on the flat course and so follow the same 1m2f oval. Events over the smaller obstacles are held over distances of 2m, 2m1f, 2m2f, 2m4f and 3m, and feature a total of six obstacles per circuit: three in the back straight and three in the home straight.

The chase course utilises the outer section of the track and as such follows a similarly oval configuration, albeit with slightly more sweeping bends and a longer circuit of 1m4f. Chase contests take place over distances of 2m, 2m1f, 2m4f, 2m5f, 3m and 3m4f. Each circuit feature a total of eight fences; three in each of the longer straights and one on each of the shorter sides of the track. The fences here are generally considered to be pretty stiff and can catch inexperienced jumpers out, particularly the two open ditches. The chase course can also be set up to stage hurdles contests, but this is only really a backup measure should the inner track be out of action.

Those who like to race prominently also enjoy an advantage in the National Hunt contests here, with the flat and fairly easy terrain, in addition to the short run of around a furlong following the final flight, often making the front runners difficult to peg back. Overall though this bias towards those who like to race up with the pace is not as strong as it is in the flat contests at this track.