Located fully 850ft up in the Haldon Hills, Exeter racecourse boasts the distinction of being the highest of all the UK tracks. Not only is the course – which many locals still refer to as Haldon Racecourse – the highest, it is also one of the oldest. Official records detail race meetings at the venue from the early 1800’s, with unrecorded tales placing fixtures even further back in time, making it older than Cheltenham and Aintree, among many others.

Previously Devon and Exeter Racecourse, and simply Exeter Racecourse since the early 1990s, the current version of the track boasts all the facilities you would expect from a modern venue, with the three stands providing exceptional views across the countryside. A National Hunt only affair, Exeter lays on 17 fixtures across its season which runs from October through to May, with the major highlights being Novembers Haldon Gold Cup meeting and the always popular New Year’s Day card. 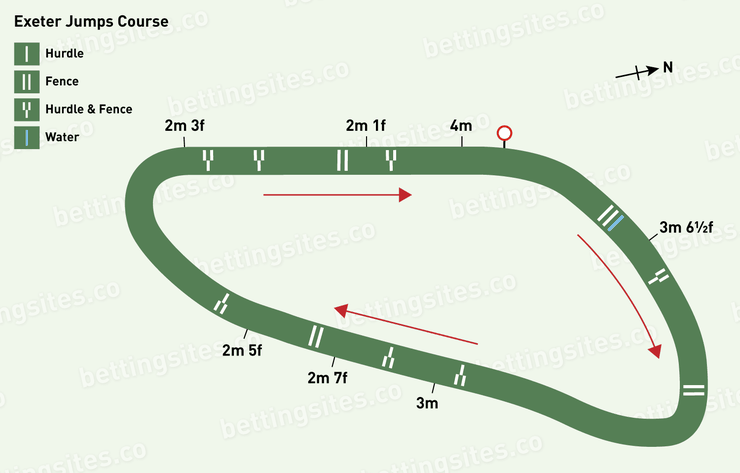 Exeter finds itself in the minority amongst British racetracks in that it is a right-handed rather than left-handed venue, not that any of the turns are especially demanding around a layout which resembles an elongated oval and features consistent undulations throughout. At two miles, Exeter’s circuit is amongst the longest in the UK.

Being so high up on a hill, the track benefits from above-average drainage but, with no artificial watering system in place, the going can lean towards the quick side in the drier months. Generally thought to provide a stiff test during winter, the faster ground of late spring places significantly fewer demands upon the stamina of the competitors.

Exeter’s chase course lies on the outer portion of the track and features 11 fences per circuit, including two open ditches and a water jump. The plain fences aren’t unreasonably difficult, but the final four do come up relatively quickly after one another in the home straight, placing further emphasis on slick fencing. Following the final flight, the field is faced with a gruelling run-in of 170-yards which rises to the line. Given the extensive and varied jumping challenge provided, the track is viewed by many top trainers as providing an ideal testing ground for their more promising novice chasers, and as such can be a good place to spot a future star.

Lying to the inner portion of the track, the hurdles course contains seven flights per circuit and features exactly the same configuration as the chase course, other than being fractionally tighter around the bends.

Given the extensive straight sections and relatively gentle bends, the track is generally suited to the more galloping type of performer. That said, any such runner who needs a flat track may struggle due to the many ups and downs of this hilltop course. As ever, previous course form, or form at similarly hilly venues such as Hexham counts for plenty around here.

Looking at the past few seasons, Sam Twiston-Davies has been the only jockey to sneak into net win, and we mean sneak. Operating at a 23% strike-rate, Twiston-Davies has rewarded supporters with a net win of around £2 to £1 level stakes. Harry Fry (29% and just over £25 net win), and Evan Williams (19% and around £27 net win) have been the trainers to follow over this period.

Not the greatest track for favourite-backers overall, there has nevertheless been a window of opportunity in the handicap chases. Backing the jolly in all such races – again over recent seasons – would have resulted in a 37% strike rate and net win of £19.60 to £1 level stakes.