Opening for business in 2009, Ffos Las became just the third racecourse to be based in Wales, and the first new National Hunt track to open anywhere in the UK for over 80 years. Also providing flat racing throughout the summer months, this Carmarthenshire venue – which lies on the site of a former open cast mine – is now widely recognised as a high-quality dual-purpose track.

Ffos Las, which translates as “Blue Ditch”, benefits from sitting in a natural amphitheatre, with the spectacular views down the Gwendraeth Valley and quality action on the track proving hugely popular with punters. Staging around 20 meetings in total, the feature contests of the season are October’s Welsh Champion Hurdle and the West Wales National which takes place in April.

Both the flat and National Hunt action takes place on the same course at Ffos Las, which in terms of its layout is one of the most conventional in the British Isles. Left-handed and oval in nature, with a circuit length of 1m4f, the track features long, wide straights and fairly gentle and sweeping bends. Flat throughout, with only a very slight rise in the back straight and corresponding slight descent in the home straight to contend with, this galloping course is considered to be one of the most straightforward and galloping around – often being compared to the well-regarded Newbury in its configuration.

The going at the track had proven to be a major issue in the early years, with bog-like conditions being far from an unusual occurrence during the winter months. A £200,000 investment in the drainage system at the track in 2015 has gone some way to alleviate this issue, but the going does still lean towards being on the soft side of good on average, and can become very testing during particularly wet periods. During brighter periods, the problems caused when the sun gets low can occasionally result in the omission of obstacles in the home straight.

When looking at the results here in recent season, there are a few names to stand out amongst the riders. Of the flat jockeys it is Oisin Murphy who leads the way in terms of strike-rate with a figure of 30% – good for a net win of £3 to £1 level stakes. Rossa Ryan’s strike rate is lower at 21%, but he tops the pile with an excellent level stakes net win of almost £28. Gavin Sheehan (28% strike rate, almost £7.50 level stakes net win) is the standout performer amongst the National Hunt riders.

Not the greatest of tracks for supporters of the market leader, all National Hunt race categories have handed a level stakes loss to jolly backers in the last few years. Results have been only slightly better on the flat, where sticking to backing the favourite in races restricted to runners aged four and older would have returned a 39% strike and around £3 level stakes net win. 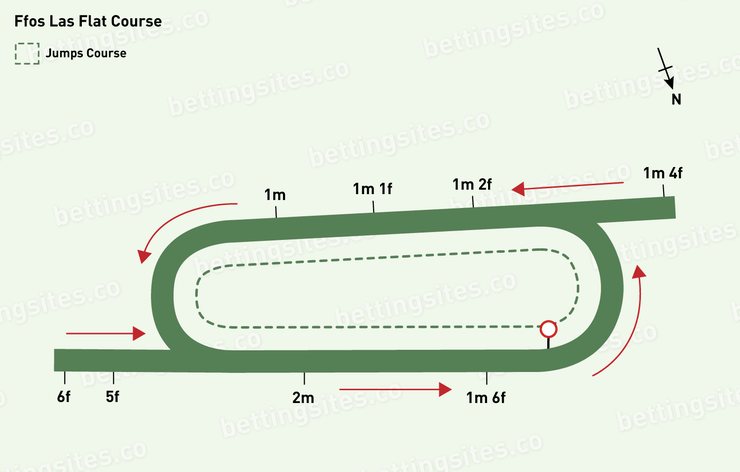 Given the long straight sections and gentle bends, together with the flat conditions and distinct lack of quirky elements, there is nothing here that should prevent a runner from showing their best form. Long-striding gallopers will be in their element given the amount of time they are granted to hit full stride, whilst the long and wide straight sections provide hold-up performers with ample time and room to come with a late finishing burst. Front runners can go well but will need to be given a well-judged ride as it can seem like a long way to the line in the 4f home straight.

Being a relatively new track, which stages the majority of its fixtures over jumps, Ffos Las doesn’t have quite the volume of draw data to assess as other more established courses. One common observation is that the ground seems to ride slower towards the inside rail in soft conditions, but the stats don’t seem to back that up. Across all flat races at the track at the time of writing, 11% were won by low drawn runners, 6.85 by those in the middle and 10.5% high – a pattern which only varies marginally depending upon the prevailing going. This evidence would suggest that middle draws are best avoided, but any conclusions can only be tentative given the relatively small sample size. 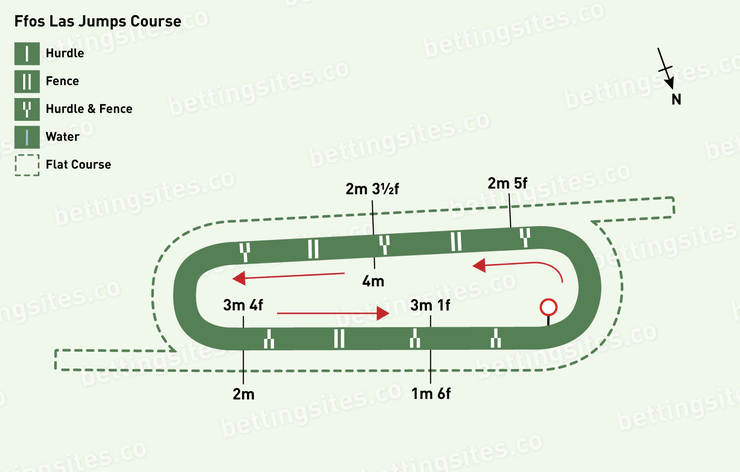 Both chase and hurdles contests take place on the main oval section of the track, with the chase course lying inside the hurdles track. Both courses are wide and galloping in nature, featuring a 4f home straight, but only a short run in of 100 yards or so following the final obstacle.

Those tackling the chase course will face a total of nine fences per circuit – five plain and two open ditches – with five obstacles lying in the back straight and four in the home straight. The Ffos Las fences are thought to provide a firm but fair test of jumping ability, not being punishingly stiff, but by no means easy.

Lying to the outer section of the oval, the hurdles course is ever so slightly more galloping than the chase track and feature six standard flights, evenly split between the back and home straights.

Given those long straight sections, and ground which is regularly on the soft side of good, the National Hunt events at the track do provide a solid stamina test. The jockeys are of course aware of these demands and tend to ensure that races are run at a sensible, rather than breakneck pace. Both front runners and those looking to come with a late run can go well here, but those on a hold-up performer won’t want to leave it too late due to that relatively short run in after the last.