Flemington is easily the most famous and prestigious horse racing venue in Australia, this course being the home of the nation’s biggest race: the Melbourne Cup. This is also the biggest racecourse outside of Japan with a capacity of over 130,000 and the place is packed to the rafters for the biggest events which include the Group 1 Australian Cup and Victoria Derby. Horse racing has been held at this venue since 1840 and the course was named on Australia’s National Heritage List in 2006.

This magnificent racecourse is the site of many of Australia’s most prestigious horse races, the most outstanding of these being the Melbourne Cup. The Melbourne Cup is part of a spectacular four-day festival which takes place in November each year, the Victoria Derby Day kicking things off on the opening Saturday of the festival with four Group 1 races. Another hugely popular event is the Super Saturday of Racing which takes place in March. 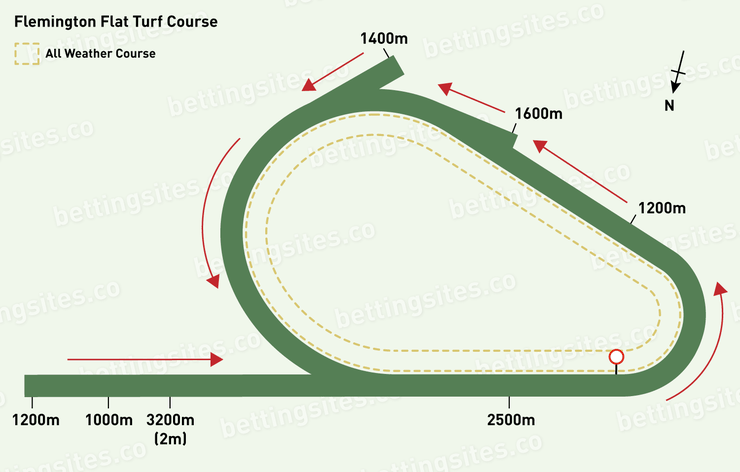 Flemington is a left-handed pear-shaped turf track which has a circumference of just under one and a half miles and one of Australia’s longest final straights at 450 metres. This venue also has a straight track of six furlongs which is known as the ‘Straight Six’.

This track provides plenty of room for competing runners and all races can be won by horses who prefer to race at pace, take the lead or come from behind. Indeed all differing types of runner can win at this venue if they are ridden by a capable jockey and are clearly up to the task. The track is perceived as being fair with wide sweeping bends. There is a camber on the right-hand-side of the track and this, coupled with new turf, has improved the track with little bias to be seen on either side. The going does tend to be on the faster side and this course suits the large galloping type of runner.

There are but a handful of races taking place over the two mile (3200m) start each year, these including the Melbourne Cup. Pace is a very important factor here with the speed usually being genuine with at least one runner setting a quick tempo. It’s not easy to lead all the way, however it is more of a challenge to win from absolute last. Indeed, the ideal running position appears to be from just behind the leaders and just a single horse away from inside rail.

The Straight Six track at Flemington is the ideal place for watching thoroughbreds galloping as fast as they can without anything to hinder them. Here, the outside rail tends to see less traffic and this can prove to be quicker after many days of consecutive racing. This outside rail can also prove to be better when the going has been affected by prolonged rain. All in all though, the straight track is generally fair, and very quick.

Flemington has some of the best racehorse training facilities in the country, with a 2.2 km synthetic track, two sand tracks and two turf tracks located in the area within the racecourse.

The synthetic track was newly constructed in 2019 at a cost of $4.5 dollars. The surface is made of Pro-Ride, which consists of a footing of six inches made up of nylon, sand and spandex fibres, all coated in polymeric binder. This rather elaborate-sounding mix of materials all sits on top of another layer of similar materials with a very sophisticated drainage system underneath, making for an extremely versatile racetrack.