Racing is said to have taken place in the Yarmouth locale since as long ago as 1715, with the seaside town previously staging a wide variety of events, including donkey racing, and the seemingly now defunct sport of chasing a pig with a soapy tail. For better or worse, it is the more standard racing of thoroughbred horses which provides the four-legged entertainment at the modern version of the track, which has been based at its current North Denes venue, just off the Norfolk coast, since 1920.

Only a stone’s throw from the sandy shores of Yarmouth beach, Great Yarmouth – or simply Yarmouth to the majority of racing fans – is famed for its relaxed atmosphere, and regularly has its crowds boosted by the many holidaymakers who flock to the region during the summer months. For those who fancy a spot of flat racing mixed in with their summer sun, there are few better spots in the UK.

In addition to sitting in a prime coastal tourist location, the track also benefits from lying only 70 miles from the major flat training centre of Newmarket, and as such it frequently attracts runners from the top yards. This is particularly true of the maiden contests at the venue, with Godolphin great Dubai Millennium and wonder mare Ouija Board amongst those to have made their debut at the track.

Now part of the Arena Racing Group, Great Yarmouth stages around 24, predominantly midweek, meetings during its season which runs from April through to October. There are no Graded events at the track, with the Listed John Musker Fillies Stakes, which features as part of September’s three-day Eastern Festival, being the highlight of the season.

The fact that the track is most active during the warmer months, in combination with the fast-draining sandy subsoil of this coastal venue, means that soft ground is something of a rarity, with the track’s watering system regularly being called into action during the height of summer. 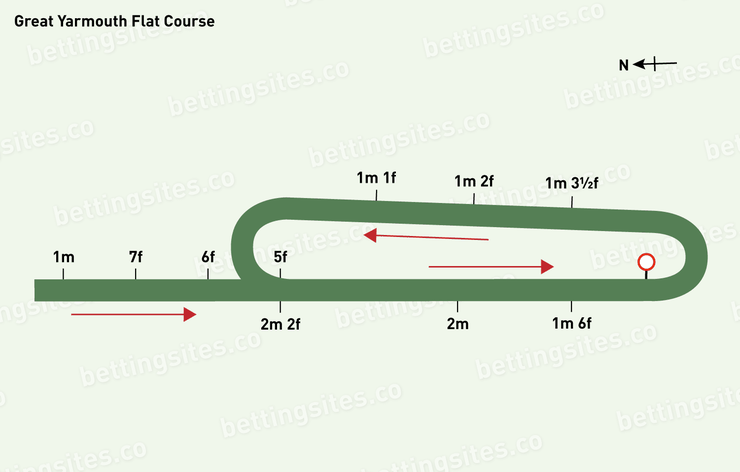 The round course at Yarmouth consists of an elongated and almost completely flat left-handed curved rectangle, measuring around 1m5f in circumference. That is, it looks like a rectangle that has flat long sides and curved short sides. The track’s two bends are pretty sharp, but this is more than offset by the two extensive 5f straight sections, resulting in Yarmouth being a venue at which the more galloping type of performer can be expected to excel.

In addition to the main connected course, Yarmouth also features a spur that runs directly into the 5f run-in, enabling straight contest to be held at trips of up to 1m. Other than a slight dip just before the 5f mark, this straight track is almost completely flat, largely thanks to extensive renovations undertaken in 2015 aimed at levelling the surface which. In common with the curved-rectangular course, this straight track is considered to provide an extremely fair test.

As fair as the track is, there can nevertheless be a slight pace bias in certain contests. In events on the straight course, the field can on occasion cluster up towards the far rail, creating traffic problems for those looking to come with a late run. Whilst over on the round course, races over 1m1f and 1m2f can favour those who like to race prominently, due to the advantage of being able to get to the bend first and maintain their position into straight – with it being extremely difficult for those in behind to make up ground on the tight turn for home. It must be noted, however, that whilst getting to the straight first can be an advantage, those frontrunners do still have to hang on for the full five furlongs before they get to the line.

There are those who believe that a high draw is beneficial on the straight course due to the perceived advantage of being able to race hard against the rail. However, the data doesn’t really back up this opinion. Across 291 contests analysed on the straight track, 8.8% were won by those drawn low, 8.6% by those in the middle and 9.0% by those drawn high. If there is an advantage towards the high numbers, it is only very slight.

When looking at events on the round course, you might expect a slight bias towards those drawn low, for the familiar reason of being able to race towards the inside of the track around the bends. However, the results would again suggest that this is not the case, with an analysis of 113 races on the round course showing win rates of 9.7% for low, 9.4% for middle and 9.7% for high.

There have also been a couple of windows of opportunity for supporters of the market leader in the past few seasons. Simply backing the jolly in all 2yo contests would have resulted in a 50% strike rate and a healthy net win of almost £21 to £1 level stakes, whilst for 3yo handicap events the figures stood at a respectable 39% and a net win of over £13.