Located only around a mile outside of the town of the same name, and set against the impressive backdrop of the Welsh Mountains, Hereford racecourse has been attracting racegoers since as long ago as 1771. Not quite continuously though as, due to a licencing issue with Herefordshire Council, the track went four years without an official racing fixture between 2012 and 2016. Thankfully those issues are now resolved and the track is a regular feature on the British racing programme once again.

Initially a flat-only racecourse, Hereford operated as a dual-purpose track between the years of 1840 and 1883 but has been dedicated solely to National Hunt events ever since. A popular venue both with punters, and the trainers based in the nearby regions of Lambourn and the West Country, the track currently stages around a dozen meetings per year. Whilst there are no real high-class contests staged at Hereford, the track nevertheless has a couple of claims to fame. It was the scene of the first-ever Paul Nicholls-trained winner in 1991. It was also the course at which Richard Johnson was first successful in the saddle in 1994.

Located in one of the drier regions of the country, and staging meetings throughout the year, Hereford was one of the more unusual National Hunt tracks in occasionally being forced to abandon meetings due to the ground being too firm – largely due to the poor watering system at the track. However, the installation of a reservoir in the centre of the course in 2018 has effectively eradicated this issue and the course can now be relied upon to provide safe jumping ground. 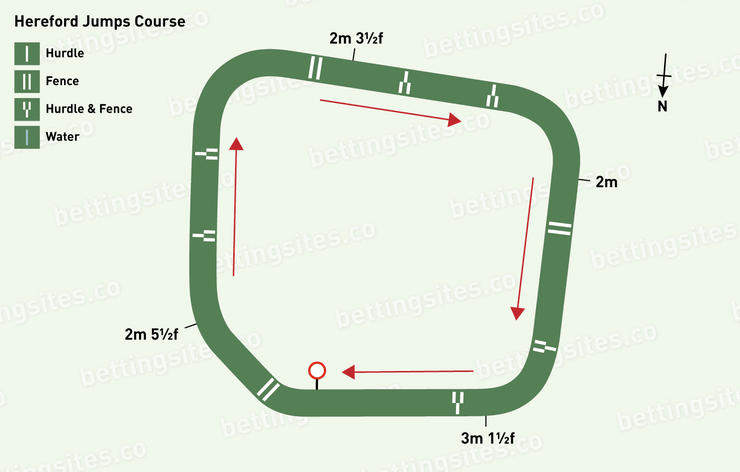 Unlike the majority of tracks in the United Kingdom, they race right-handed at Hereford, with the track itself having the appearance of a square with one of the corners cut off. It measures approximately 1m4f in circumference. Being close to rectangular, those bends can be fairly tight, with the turn into the home straight being the sharpest of the four. Generally flat throughout, the only significant undulation comes on the downhill turn for home.

Given those four fairly sharp turns, this is a track that lends itself to the sharp, nippy type of runner, more able to maintain their momentum when taking the bends. Trailblazers also go well around here, often proving very hard to peg back if given an easy time of it on the front end.

The chase course stages races over 2m, 2m3f, 2m5f and 3m1f and features nine fences per circuit, including two open ditches. Three fences lie on the straight leading to the backstretch, three in the backstretch itself, two on the run back towards the stands and just the one in the home straight. The first fence after the winning post has an added level of difficulty in that it is taken on the turn, however, it is the final obstacle that is widely considered to be the trickiest.

Coming up quickly following the tight and downhill bend, it can draw an error from runners having not fully regained their balance. Mistakes at this obstacle can prove to be particularly costly as with a run-in of only 300-yards there is little time in which to regain any lost momentum.

Those tackling the hurdles course face six flights per circuit – two in the straight out into the country, two in the backstretch and one each in the final two straight sections. For the same reasons as those which apply to the final fence, it is again the last of these hurdles which can prove the most problematic. Hurdles contests are held over distances of 2m, 2m3½f, 2m5½f and 3m1½f with the course again featuring a run-in of 300 yards following then final flight.

Hereford hasn’t been the happiest of hunting grounds for favourite backers overall, but there has been a small window of opportunity in the handicap chase contests. Supporters of the market leader in such events have been rewarded with a 34% strike rate and level stakes net win of more than £6.