Situated fully 800ft above sea level at the appropriately named High Yarridge, just south of the town of Hexham in Northumberland, this relatively unheralded track is one of the UK’s real hidden gems. Sitting atop a hill, with the track itself lying in a natural amphitheatre, racegoers at Hexham are afforded exceptional views both of the racing action and over the rolling countryside.

The exact origins of this National Hunt course have become a little muddied over time, with some reports hinting at racing in the area since as long ago as 1720, and others suggesting 1793 as the year of the first events at the track. However, the most commonly quoted date for the opening of the venue came later, in 1890, thanks to the efforts of a local businessman by the name of Charles Henderson. And other than a First World War-induced break, racing has been held up on the Hexham hill ever since.

Northumberland’s only course is in fact the most northerly of all the English National Hunt tracks, a fact which no doubt has something to do with the course’s decision not to stage any fixtures during the winter months of January and February. As such racing at Hexham operates a little out of synch with the main National Hunt season, with the majority of the track’s 17 fixtures falling between the months of March and December – including a number of popular evening and twilight meetings in April and September.

Despite that scheduling, the track is no stranger to soft ground during the autumn and early winter months, although it rarely becomes unraceable. At the other end of the weather spectrum, an irrigation system fed by a lake in the centre of the course helps to maintain safe racing ground during the somewhat rarer dry periods.

There are no truly high-class events at a course which generally attracts runners from the lower rungs of the racing ladder. However, that doesn’t prevent the track from laying on a stream of highly competitive fixtures, with the pick being the Heart of All England Hunter Chase meeting in May.

Overall Hexham is considered to be a fair but testing track, with that stiff finish bringing stamina firmly into play, particularly when the ground is riding, as it often does, on the soft side. An ability to thoroughly stay the trip is therefore one of the number one prerequisites for success. Given all those ups and downs, any runners with solid previous form, either at Hexham itself, or similarly undulating venues, are usually well worth a second look.

One final point to note is that this can be a particularly challenging track for frontrunners due to the difficulty of judging the pace correctly, whilst still retaining sufficient energy for that tough uphill finish. Any runner kicking for home even a fraction too early may well find themselves reeled in on the chase for home.

Based nearby in the Borders, Stuart Coltherd has been the man to follow amongst the trainers at this track – a strike rate of 16% and a net win of almost £31 to £1 level stakes in recent seasons, suggesting that his runners are often underestimated in the market. Lucinda Russell (14% strike rate, just under £7 level stakes net win) has also provided supporters with a net win over this period. There are no clear standouts amongst the riders, with Thomas Dowson (14% strike rate, around £3.70 level stakes net win) the only jockey to provide a positive return.

The track has provided slim pickings for favourite backers over the last few years, with all race categories over both hurdles and fences returning a loss. The only positive figure for favourites comes thanks to the relatively small number of the National Hunt Flat races here (55% strike rate and around £3.50 level stakes net win).

The track at Hexham is left-handed, broadly oval in configuration and close to 1m4f in circumference. It is however not quite the standard oval seen at many other tracks, with two parallel straights lying closest to the stands. The outer of these two straights contains the winning post and is used on both the hurdles and chase courses, whilst the inner straight is used only in chase contests – with the runners then turning into the straight containing the winning post on the final circuit.

One of the most noteworthy features of the track is just how undulating it is. The run away from the stands is actually relatively level but the back straight itself descends pretty sharply. Upon leaving this back section of the track the field then faces a steep climb almost to the line, with the ground only really beginning to flatten out again in the final 250 yards or so. 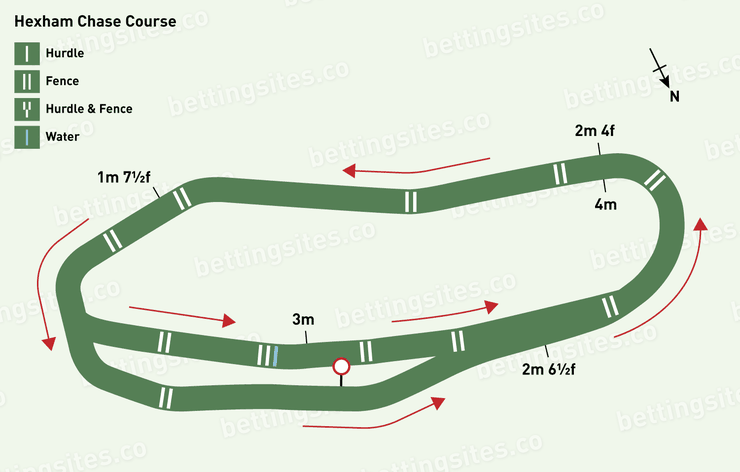 A circuit of the chase course is made up of the back straight and the inner of the two stand’s side straight sections, with the outer stand’s side straight then being used on the final lap. The track features 10 fences per circuit, including two open ditches and a water jump. Hexham’s fences aren’t considered to be unduly demanding, and are split evenly between the two straight sections, with one final fence in the home straight before the runners tackle the 250 yard run in to the winning post. The chase course stages contests over 1m7½f, 2m4f, 2m6½f, 3m and a marathon 4m. 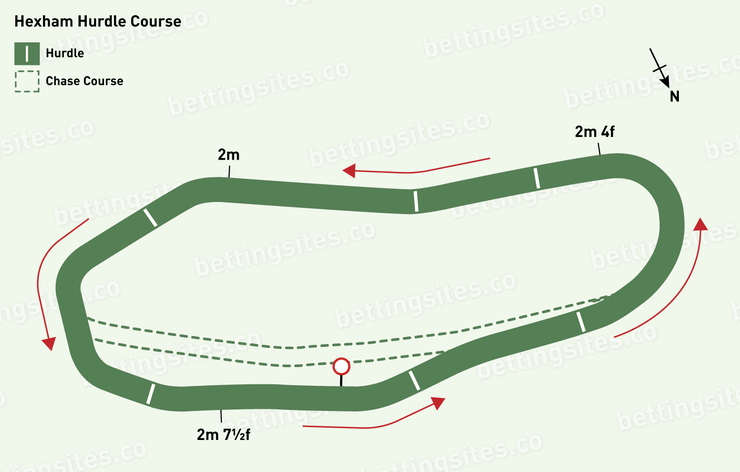